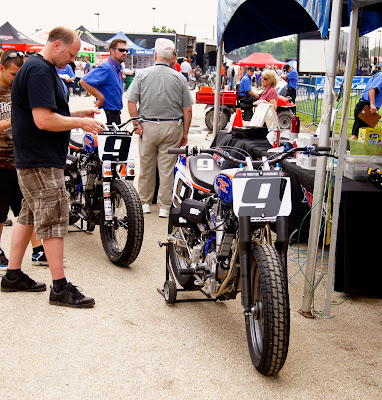 Jared Mees (partially hidden) and crew chief Brett Armbruster attach some 'Screamin' Eagle' stickers to the #9 Rogers Lake/Blue Springs H-D/Lucas Oil/Saddlemen-sponsored XR-750s after going through the tech line at round 6 of the 2011 AMA Pro Flat Track Harley-Davidson Insurance Grand National Championship Series at the Springfield Mile in May.  Mees went on to win the main at the Illinois State Fairgrounds oval, his first at the legendary facility, and his first National race win in nearly four years.  The event also marked Armbruster's first National mile win in his close to 20 year career turning wrenches in the series.

Since that win, Mees has gone on another one of his usual tears that he is famous for in the last few seasons, carding three more top 6 finishes, including another win at the Hartford Half-Mile, and a 3rd place finish at Hagerstown on July 9.  The Jammer now sits in the 3rd spot in the overall point standings for the year, with 175 points, just one point behind defending AMA Grand National Champion Jake Johnson (176 points), and Sammy Halbert, who has the current point lead, with 191 points.

The '09 AMA Grand National Twins Champion has been Mr. Solid and Mr. Consistency for the better part of the last three seasons on the AMA Pro Flat Track Grand National Championship Series trail, and with his two most recent wins to add to his long list of solid podiums and top 5's, there's no reason to think his M.O. will be changing any time soon.  If anything else, the former AMA Horizon Award winner will use these great results to springboard ahead to more wins and podiums.

Thanks to Blue Springs H-D, one of Jared's main sponsors, for putting this great video together for the fans.  This is another outstanding video produced by the great team of Yve and Will at The Fast and Dirty.com that will knock your socks off:


And you can find the link to Jared's press release posted on Larry Lawrence's The Rider Files.com, below.

(NOTE--I don't make it a habit of copying/pasting press releases and/or stories of any kind, and I have been trying to get on Jared's press release list for over a month now, just like I am with Johnny Lewis and the Lloyd Brothers team.  Until I do, I'll provide the links to the releases as I have been doing):

And here's Miriam Deitcher's Hagerstown main event video that she put together as part of her Flat Track Live @ Facebook coverage:

This is the link to Jared's official website, which also has his recent press releases posted and some other interesting items about The Jammer and his Rogers Lake/Blue Springs H-D team: