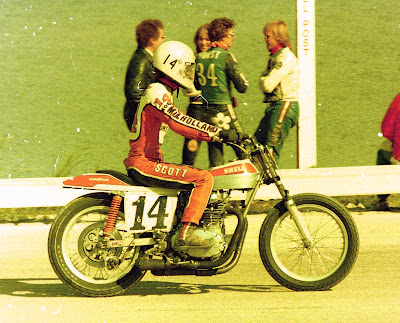 '74 AMA Flat Track Rookie of the Year Hank Scott #14, rolls the throttle on while doing a burn-out to scrub in his tire at the Louisville Downs Half-Mile ABC-TV 'Race of Champions' event in October of 1976.  Scott had qualified for the winners-only TV race by virtue of having won the Oklahoma City Half-Mile earlier in the season on his Shell Thuet-tuned and Shell Racing Specialties/Mulholland-sponsored Yamaha XS-650-based parallel twin mount.

Some of the other riders that qualified for the TV 'Race of Champions' event that year also included the late Rick Hocking, Corky Keener, 3-Time AMA Grand National Champion Jay Springsteen, and the late Ted Boody, among a host of others.  Kenny Roberts didn't make the trip for the second year in a row from California, supposedly at the time because the event didn't pay the standard 'start money' that the regular season schedule did.

One of the all-time greats in the series, Hank Scott was inducted into Dave Despain's Dirt Track Flat Track Hall of Fame at Springfield, IL. over the Memorial Day Weekend in 1999, along with a class that also included Jim Rice and Alex Jorgenson.  Despain's Hall of Fame races over the Memorial Day Weekend at Springfield from '98-'00 were started as a way to honor the riders of The Rolling Thunder Show, and raised extra purse money for those that made the show.

A BIG thanks goes out to Mike Veach and Jim Grant from FlatTrackWorld.com for this great up-to-date interview with one of the icons of AMA Flat Track Series racing.  Hank Scott was (and still is!) one of my all-time favorite riders on the Grand National Championship Series trail, a man who captivated me as a young fan, that hit the track as a hard charger and sheer champion of the sport.

Great interview with Hank here that will get you up-to-date with former National #14: