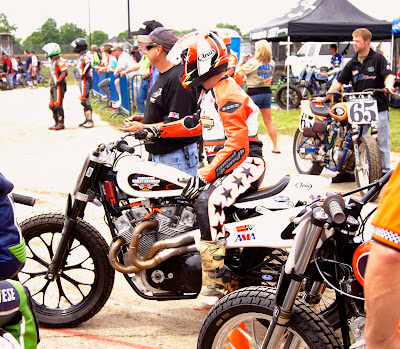 7-Time AMA Grand National Champion Chris Carr sits on his #4 American Motorcyclist Assoc/DFW Honda/Arai/Phoenix Racing-sponsored Harley-Davidson XR-750, while waiting for the 'go' sign for practice to begin at the Springfield Mile, during round 6 of the 2011 AMA Pro Flat Track Harley-Davidson Insurance Grand National Championship Series in May.  Carr's long-time tuner, and one of the winningest wrenches in the series, Kenny Tolbert, awaits the on-track action alongside him with his stop watches in hand.

The Prince of Peoria, who is in the midst of his 'Chris Carr Farewell to Flat Track Tour 2011' made an appearance on Dave Despain's Wind Tunnel show the other night on SpeedTV, talking with his long-time friend and fellow flat track fanatic about a variety of subjects.  Some of those topics included his record at Peoria, his land speed record at Bonneville from several years ago, and his relationship with former team mate, and the only man he is second to in terms of wins and championships, 9-Time AMA Grand National Champion Scott Parker.

One of the topics of discussion was Chris' future in terms of AMA Pro Flat Track Series racing is concerned, as he has made it know to all that once he hangs up his steel shoe, he plans to head up a team along with Tolbert to field a young rider on the AMA Pro Flat Track Grand National Championship Series trail.  With the economy having an affect on everyone across the nation, and around the world, one of the hardest hit sectors is in the recreational vehicle areas.  And motorcycle sales have been impacted in the industry as well, so finding sponsorship to run a team from the '12 season and on, is still being sought out.

With the upswing in AMA Flat Track Series racing over the course of the last several seasons, Stu's Shots is hoping that this comes together soon for one of the greatest champions of the sport.  A team headed up by Carr and Tolbert would be a serious threat, as well as a big help to the series.  With their combined wins and years in the series, a Carr/Tolbert teaming in AMA Flat Track seems like a natural, and would be a strong bet to be a sure winner right out of the box with the right rider/sponsor combination.

Thanks to SpeedTV.com and the best flat track race announcer to ever hit the planet, Dave Despain, for this link to Chris Carr's appearance on Dave's Wind Tunnel from Sunday, July 17:

You can check out Chris Carr's AMA Motorcycle Hall of Fame bio here to read more about the '85 AMA Flat Track Rookie of the Year: