AMA Flat Track: The Rolling Thunder Show Heads to the Hagerstown Half-Mile for Round 10 on July 9 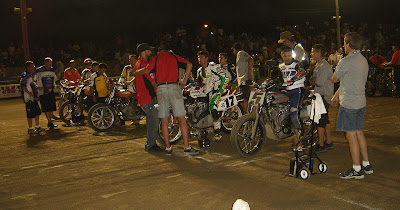 Riders and crews get ready for the Expert Twins main event for the Lima Half-Mile at the Allen County Fairgrounds in June of 2010, as part of round 7 of the 2010 AMA Pro Flat Track K&N Filters presented by Motorcycle-Superstore.com Grand National Championship Series.  With the K&N sponsorship not renewing for the 2011 season, the series' primary sponsor made a big change, with Harley-Davidson Insurance stepping in to take over the title sponsorship of AMA Pro Flat Track, and in a BIG way, as was announced back in March.  This year's payoff to the riders at year's end doubled to a total of $100,000 going to the top 12 finishers in the overall championship, with $20K of that going to the 2011 AMA Pro Flat Track Harley-Davidson Insurance Grand National Champion.

Front row starters for the 2010 Lima event as shown from L-R are;  Matt Weidman on the #20 White's H-D/SNIP/Silkolene/Shoei-sponsored Harley-Davidson XR-750.  Weidman went on to garner his first podium in Grand National racing that evening with a great run to 3rd place.  Last week he moved up another spot on the box in finishing 2nd in the 2011 event for his second GN podium of his still-young career.  The New York State resident sits in the 8th spot after nine rounds in the 2011 AMA Pro Flat Track Harley-Davidson Insurance Grand National Championship Series overall point standings after finishing out the 2010 season ranked in the 9th spot.

Jared Mees #1 Rogers Lake/Blue Springs H-D/Lucas Oil/Saddlemen-sponsored XR-750 sits next in line, with crew chief Brent Armbruster looking things over from in front of the bike.  Mees, the '09 AMA Pro Flat Track Grand National Twins Champion, has been on a serious roll in the 2011 season, and last week's 5th place finish at Lima added to the success he has had overall in the last 2 1/2 seasons.  With his recent string of wins (Springfield Mile/Hartford Half-Mile) coupled with his usual solid finishes on any type of track, Jammin Jared should be as tough as nails come race time at Hagerstown next Saturday.  Currently 3rd in the overall point standings, The Jammer should be right there in it all year long with the same solid finishes he is famous for.

Joe Kopp and his #3 Latus H-D/American Agip/Lloyd Brothers/MotoConcepts-sponsored Ducati sits next in line, with crew member (and former National #23) Kevin Atherton looking over the machine during the rider intros.  Kopp, the '00 AMA Pro Flat Track Grand National Champion, retired from full-time competition after the end of the 2010 season, and 2nd place finish in the overall championship standings after taking the big Ducati to it's initial win on the mile oval in Arizona in May 2010.  Kopp is expected to run the Castle Rock TT later this summer, and also intends to run a few more XR1200 Series road races at the least, according to Tyler Porter's Fight for Dirt Track report from yesterday.  Kopp has a huge following of fans and has been missed around the track, so it will be good to see Smokin Joe back, throwin it in left!

In the mean time, Brad Baker #12 has taken over the reigns of the Lloyd Brothers Ducati for the 2011 season, and at this time has a stranglehold on the Rookie of the Year title, along with knocking on the door in getting his first Grand National win.  His run at Lima last week to 4th place in the final while still getting accustomed to the workings of the Ducati was probably a mere preview of what we have yet to see out of this young man from Washington State with the million dollar smile.  Don't be surprised when The Bullet breaks through for his first win, which very well could happen at Hagerstown next weekend!  Baker sits in the 4th spot in the overall championship going into round 10 at Hagerstown next weekend and the '09 AMA Pro Flat Track Pro Singles Champion is looking to pull a 'Jeffersons' and move on up.

Sammy Halbert #7 can be seen over the shoulder of Henry Wiles #17 as his XR-750 (mostly hidden) is rolled into place on the starting line.  The Kings Kustoms/KK Supply/Nelson Racing/AGV-sponsored rider went on to a 2nd place finish at Lima in 2010, and currently leads the overall championship standings after gaining his third win on the season at Lima last week.  With only one finish outside the top 5 this season (6th place/Hartford) this young man is making a serious case for the 2011 championship.  With three top fives in three previous races at Hagerstown, Slammin Sammy knows the way around the clay track in Maryland.

Eventual Lima 2010 event winner Henry Wiles sits on his #17 XR while his Mike & Eddie Atkins/KK Motorcycle Supply/Don Kissinger Racing/Saddlemen-sponsored team discusses the upcoming final event for the evening.  Hammerin Hank had the perfect evening that night, setting fast time, winning the fastest heat, the Dash for Cash event and the main event by 6.564 seconds over runner-up Sammy Halbert.  The 2-Time Singles Series Champ won the Salinas Short Track over Easter Weekend in April, and then went under the knife for a leg/knee fix after suffering an injury at the round 3 event at the DuQuoin Indoor Short Track on April 16.  As things stand now, Henry is expecting to return to action at the Peoria TT in August.

And finally we get to the 2010 AMA Pro Flat Track Grand National Champion, Jake Johnson on his #5 Zanotti Racing/Leo Vince/Arai/Tucker Rocky-sponsored XR-750.  Team member (and former National #67) Mike Hacker and crew chief Ted McDermitt can be seen alongside Johnson as they talk final race strategy for the 25 lap event.  The 2011 season sees Johnson with two wins (Salinas TT/Springfield TT) to go along with his usual on-the-box appearances.  Jersey Jake's 8th place finishes at Hartford and Lima have seen him slip to 25 points behind series' leader Halbert after 9 of 22-scheduled rounds, but this veteran of The Rolling Thunder Show almost always comes on stronger as the season wears on.  And you never count out a former champion or a man with as much determination as what Johnson has.  He's going to be there all day, night and year-long!

Other riders that are sure to make a good showing at Hagerstown include (among many others) former 3-Time AMA Pro Flat Track Grand National Twins Champion Kenny Coolbeth, Jr. on the #2 Screamin Eagle Factory Harley-Davidson XR-750.  Currently 4th in the overall championship standings, The King of Cool has 14 years of experience at Hagerstown to go along with his two wins at the track.  After winning the DuQuoin race in April, Coolbeth has been as solid as ever on all of the tracks that the series has hit.

Chris Carr and his #4 American Motorcyclist Assoc/DFW Honda-sponsored and Kenny Tolbert-tuned XRs are in full swing in the 2011 Chris Carr Farewell to Flat Track Tour.  Still hurting from his Springfield TT get-off(s) from late May, The Prince of Peoria still sits in the 6th spot in the overall championship after having an 'off night' at Lima last weekend, mostly due to those injuries.  One thing to remember, you never count out a former champion, let alone a former 7-Time Champion!  Bryan Smith on his #42 Moroney's Fasthog.com XR is doing a great job of becoming re-acclimated to the Harley-Davidson camp after a year of riding the Werner-Springsteen Kawasakis.  It's just a matter of time before he gets that win in 2011, and Johnny Lewis on the #10 Scott Powersports Kawasaki is getting better and more solid results as the year goes on, and he currently sits in the 7th spot in the overall standings.  This fine young man's determination and ability alone is worth keeping an eye on.

There is a big handful of others that could provide a 'break' in the current action of winners for the 2011 season, including Jimmy Wood #37, former Rookie of the Year Steve Bonsey #80 and even Illinois resident Rob Pearson #27, who ran fourth at Hagerstown last year.  And once the Werner-Springsteen Kawasaki team of JR Schnabel #33 and Shaun Russell #28 get their bearings on the Ninja-based twins, they could even throw a hammer or two into the mix.

Hagerstown Half-Mile Preview:
Maryland Hosts the Quick and the Smooth
DAYTONA BEACH, FL (July 1, 2011) - After a round spent on the rough-and-tumble limestone of Lima's Half-Mile, the AMA Pro Harley-Davidson Insurance Flat Track Championship next turns to the smooth, fast, car-track half-mile in Hagerstown, Maryland, for a July 9 event. The tenth round of the series' 22-round calendar, the Hagerstown Speedway Half-Mile comprises the championship's only 2011 appearance on the Atlantic Seaboard.

Miriam Deitcher will be on-hand giving you the day's rundown from Hagerstown via her Flat Track Live on Facebook page: