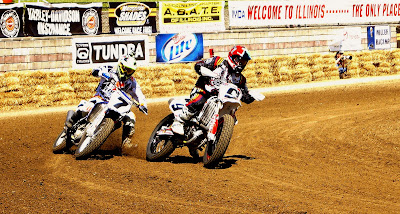 Jared Mees on his #9 Montgomeryville Cycle Center/Lucas Oil/Rogers Lake Racing/Saddlemen-sponsored Honda CRF450R leads Sammy Halbert on the #7 Woody Kyle Racing/Fredericktown Yamaha/AGV/Kings Kustoms-backed Yamaha YZF450F during their battle for the 2nd spot on the box in the Dash for Cash event at the Springfield TT in May.  Round 6 of the 2011 AMA Pro Flat Track Harley-Davidson Insurance Grand National Championship Series was postponed from 48 hours earlier when torrential rains and hail decimated the Rodeo Arena's facilities approximately 45 minutes before practice was due to start.

However, the 'slight' delay in the program didn't make for any less interesting or exciting racing as The Jammer and Slammin Sammy took their battle on the track right to the wire, with Mees getting the second spot on the podium behind Dash winner JR Schnabel on the #33 Werner-Springsteen Monster Energy Kawasaki.  Mees would go on to prevail over Schnabel and Halbert in the main event, taking 2nd place behind event winner Jake Johnson on the #1 Zanotti Racing Honda.  Schnabel would round out the podium in the main while Halbert would fight back from a red-flagged, last row restart to net 5th on the day.


Mees and Halbert will lead a contingent of AMA Pro Flat Track regulars to the east coast over the weekend as the Steve Nace Racing/AMA Pro Flat Track All-Star National Flat Track Series heads to Frederick, MD. on Independence Day for the Barbara Fritchie Classic, one of, if not THE oldest flat track races in the country.  With Mees leading the point standings in the Steve Nace Series, in both the Twins and Singles classes, look for his 'man on fire' routine of late to shine through once The Rolling Thunder Show touches down on the 4th of July!

Frederick is the home of Slammin Sammy's main sponsor in the Singles Series, so that in itself should provide that much more motivation for the man in charge in the 2011 AMA Pro Flat Track Harley-Davidson Insurance Grand National Championship Series.  And other then Mees, there probably isn't any one other racer that races more during the off-season or between Grand National events, and with the roll that Sammy has been on this year should make for some extra exciting competition amongst the ranks of the best from The Rolling Thunder Show.  The Barbara Fritchie Classic takes place at the Great Frederick Fairgrounds with the first practice session scheduled to roll off at 0930 EDT on July 4.

After wrapping up the 1st of a 2-race east coast swing, the AMA Pro Flat Track regulars then will head to Winchester, VA. for the July 8 running of the Winchester Speedway Half-Mile event as part of the Steve Nace/AMA All-Star Series.  This race should be a major stopping point for even a few more of the AMA Pro Flat Track Grand National Championship Series regulars, especially so since it is the night before round 10 on the calendar at the Hagerstown Half-Mile event on Saturday, July 9.  For anyone in the area for Saturday night's Grand National event, this round is a must-see event since it is only approximately 45 miles from Saturday night's race.  First practice hits the track at 1700 EDT on Friday, July 8. 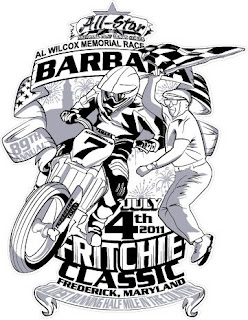 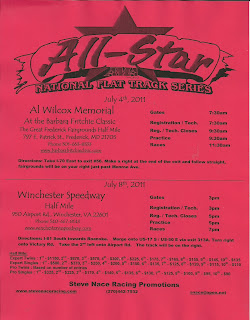 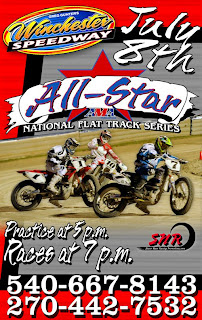 You can check out Steve Nace's official site here to get an idea of where the point standings are after six of 11 scheduled events on the 2011 season.  Question-can ANYONE stop either Jared Mees OR Sammy Halbert in these upcoming events?

I found a little video of some action in Frederick from the 2008 races: