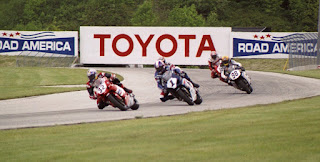 Great news for Jake Zemke fans comes from the great folks at Cycle News.com.  Zemke, who put the Project One Yamaha on the pole for the Daytona 200 back in March, and came home a respectable 3rd in the shortened race, has accepted a ride on a WFR Honda CBR1000RR in the British Superbike Championship EVO Series.  The EVO Series is essentially a 'Superstock'-spec series similar to what used to run as one of the campanion classes in the AMA Road Racing Series back before the '09 season, running closer to stock chassis and engine mods, but with slick tires mounted ala the superbike class.

After the downturn in the economy and the U.S.-based AMA Road Racing Series of the last several years, Zemke went from winning the '08 AMA Formula Xtreme Championship to signing with the Michael Jordan Motorsports team in the 2010 season in the premier AMA Superbike Championship Series on Suzuki GSX-R1000s sponsored by The National Guard.  Taking his first two maiden wins for the team at Daytona in March of 2010, Zemke struggled to equal his early-season results and ended up 3rd in the year-end standings behind eventual champion Josh Hayes and runner-up Tommy Hayden.  When the 2011 season rolled around, he wasn't offered another year with the team and was left without a ride except for the Daytona one-off riding for the Project One team.

You can read the story here thanks to Paul Carruthers at Cycle News.com and we'll be behind Jake all the way when he lifts a leg over the WFR CBR for the first time on June 17.  Read on: