Race 2 saw Hayden get a spectacular holeshot with teammate Young right on his tail. Hayes, however, wasn't looking for a Saturday re-run, so he stuck like glue to the Suzuki duo. For the first several laps, Hayden and Young traded the lead amongst themselves, but in no time at all, Hayes had blown past both Suzuki riders and taken the lead for himself. 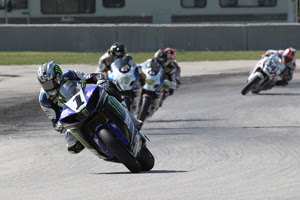 The AMA Pro Road Racing Championship next heads for Barber Motorsports Park in Birmingham, Alabama, for the Barber SuperBike Classic, Round 5 on the season calendar. For tickets and information, visit www.barbermotorsport.com or call (877) 332-7804.

To be a part of the AMA Pro Road Racing Championship, visit http://www.amaproracing.com/ and join us on Facebook (facebook.com/amaproroadracing) and Twitter (twitter.com/AMAProSBK).

Josh Hayes, 1st: "I had a different game plan today... Sometimes you make a plan and you're lucky -- you think it, you believe it and you make it happen. Today, I got the passes done in the right places, I gave myself the opportunity to make the split. I was confident that I had the tools in my package and the motorcycle to make it happen. I rode as hard as I could, I was trying super-hard and it just wasn't there to go much faster today. I got to a point where I could relax a bit, make sure I didn't make any mistakes and bring it home."

Tommy Hayden, 2nd: "There were a couple of places on the track where I was better today, but my lap times were pretty similar to yesterday. And it was more of a two-rider battle today with Blake and me, versus a three-man battle like yesterday. I knew Josh was pretty fast through the middle splits, and that the potential was there that if we didn't stay on our toes, he'd get a gap that would be too hard to close down. Josh put his head down, Blake made a few mistakes and kind of helped Josh open it up. We tried to chase Josh down, and at one point I thought we were making some progress but in the end it stayed the same. I'm happy to make a little improvement today, move up a spot, but I would rather have been the winner. Overall, the bike is running good, and I have everything I need to get the win."

Blake Young, 3rd: "I just knew today's pace would be a little bit quicker, but I thought I could run pretty good laps. Then all it took was one lap for me to get settled in and get going, and it took one lap for Josh to really nail it. I tried to do everything I could and put my head down and get back to him as much as possible, and I think I made a pretty good push for a few laps, then I realized I wasn't doing anything. Then Tommy came drafting by me and I thought that maybe working with Tommy and working with the draft that we could get back to Josh.... But I made a few mistakes ... and now I'm just happy bring home third place, even though it would have been better to get the win. Now we've got a few weeks off and I'm looking forward to that and getting back to my training, to being home, and I'm just glad I could bring home a win yesterday and third isn't too bad today."


ELKHART LAKE, WI (June 5, 2011) - Sunday's AMA Pro Daytona SportBike action at Elkhart Lake's beautiful Road America track immediately launched into one of the high-speed, seven-rider freight trains the class has become known for. Within minutes, though, a red flag flew and the action came to an abrupt temporary halt, as Team Latus Motors' Jason DiSalvo -- who'd been dicing with Race 1 winner Josh Herrin (Monster Energy Graves Yamaha) and Celtic Racing/Fast by Ferracci's PJ Jacobsen for the lead -- spun out of the race before the field had completed Lap 3.

The red flag flew soon after to give the ambulance clear track to retrieve DiSalvo from the infield. DiSalvo was up and walking, but was taken to the track clinic to get a doctor's assistance in pushing a dislocated right shoulder back into place.

On the restart, Jacobsen rocketed back into the lead with Herrin, Danny Eslick (GEICO Powersports/RMR Suzuki), Dane Westby (M4 Suzuki), Cory West (Vesrah Suzuki), Cameron Beaubier (GP Bike Parts), and Tommy Aquino (Y.E.S./Pat Clark/Graves Yamaha) bearing down on him, all separated by less than a second. When the second red flag few (following crashes by Jake Holden and Jason Farrell), it resulted in a few minutes of downtime followed by a restart that spit out roughly the same front running order, Herrin taking the holeshot but soon ceding it to Jacobsen.

Beaubier, who rose high in yesterday's race before getting sucked back into the chase group, made another attempt at front-runner status by sliding into third ahead of Eslick, but Eslick quickly turned the upstart around, West following up by pushing Beaubier back yet another position. Herrin, meanwhile, was sticking close to Jacobsen's rear wheel, even as Eslick scouted for a way around the Yamaha rider. Just corners later, however, it was West who made a big move, first stuffing Eslick to take over third, then sailing past both Herrin and Jacobsen to take over the lead.

What followed was a series of lead changes so quick and frenetic that race-watchers couldn't look away for a second, and the drafting action up the front straight impressed even the racers, Herrin later commenting, "At one time, we were five- or six-wide going down the straightaway. I looked to my left and was like, 'damn.'"

West's lead fell first to Jacobsen, then Herrin, Herrin taking over the front spot to lead an astoundingly close seven-rider freight through Road America's turns and multiple straights. Soon, though, it was Eslick in the lead, heading West and Westby, the latter moving up to take his own turn at the front, and in later laps Beaubier again jumped forward briefly to head the pack. With just a handful of laps remaining, though, the field lost another major player, as Jacobsen was suddenly seen riding his bike onto the grass with an apparent mechanical. 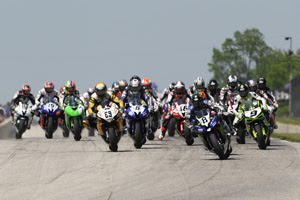 Pulling up beside Westby on the straightaway, Herrin slid by enough to cut into the turn and reclaim the lead heading for Road America's back section, but within turns it was Eslick at the front, leading Herrin, Westby, Aquino, and West through the final corners. As the final-approach drafting battle began, however, Josh Herrin roared up from behind, slingshotting past to claim the victory by .093 seconds.

The AMA Pro Road Racing Championship next heads for Barber Motorsports Park in Birmingham, Alabama, for the Barber SuperBike Classic, Round 5 on the season calendar. For tickets and information, visit www.barbermotorsport.com or call (877) 332-7804.

To be a part of the AMA Pro Road Racing Championship, visit http://www.amaproracing.com/ and join us on Facebook (facebook.com/amaproroadracing) and Twitter (twitter.com/AMAProSBK).

Josh Herrin, 1st: "I think I just have a fast bike. There's no real perfection to drafting in a straight line, I just had the fast bike today and I have to thank my guys -- they know how to build fast bikes. It was a great race, lot of close racing, and I'm just glad we finished another race weekend strong and get to head over closer to my house now for Barber. I was just trying to stay patient, not get too antsy. I knew we had a fast bike today, knew we could gain time on straight and were pretty quick in the Carousel, so I was just waiting for my shot at it and didn't try to rush it.

"It's nice to be in the lead, but kind of crappy the way that it happened. I knew we could get up there, but I definitely didn't expect it to happen this soon. But the championship is pretty close now, so it'll be a fun year."

Danny Eslick, 2nd: "When there's five, six guys going for it you get a huge draft and you can get in there deep [into Turn 5]. It was just an awesome race, I don't know what to say. I can't wait to get home and watch it ... it had to be spectacular for the fans and everyone watching. I definitely wanted to be leading.... I tried a few times to get by Dane through the start-finish line and it wasn't working, so there was no way I was going to get by him. You can kind of feel when someone's drafting up behind you. I didn't feel it, didn't feel it, then Josh came sling-shotting by me. It was definitely my best finish at Road America, I had a great weekend, and I'm looking forward to moving on to Barber."

Dane Westby, 3rd: "All the guys did pretty much same thing the first couple corners, so I didn't really think about [the red flags] too much. I knew [Herrin and Eslick] were going to come back by on the straight, so I was just trying to set up the brakes. When the white flag came out, it honestly surprised me a little bit. But it was close racing between me and the guys, and everything worked out great."