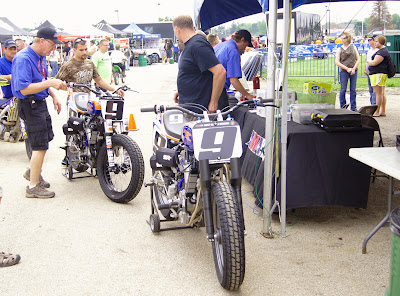 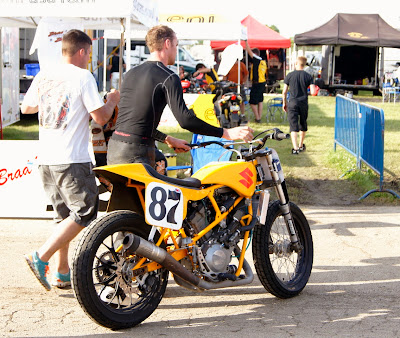 SPRINGFIELD, IL (May 30, 2011) - Mother Nature tried, but ultimately couldn't stop the AMA Pro Harley-Davidson Insurance Flat Track Championship from getting another action-packed Springfield Mile into the record books before darkness fell on the famous mile oval.

The heavy rains that forced the postponement of Saturday's TT race also left the Mile a sea of mud, thereby forcing AMA Pro officials to adopt an abbreviated Sunday schedule to allow for time to get the track back in shape. The top six in three Expert Heats would advance directly to the National, foregoing the semis, while the Motorcycle-Superstore.com Pro Singles class would run two heats, moving nine riders from each into their main event.

The first Twins event of 2011 was well worth the wait for the large crowd that filled the grandstands and infield, as the racing was unrelentingly intense once the "Rolling Thunder" series hit the track. And speaking of waits, Rogers Lake Racing/Blue Springs Harley-Davidson's Jared Mees hadn't won a Grand National event since 2007---- a drought he put an end to on Sunday. "I've been imagining this for about five years," said Mees, "and today it all came together. My last win was on 7-7-'07, and that added up to 21, my number at the time. I told Craig [Rogers] on the way out here this morning that I was going to change all that today."

The 25-lap race evolved into the much-anticipated Springfield "chess match," as a seven-rider pack dwindled down to three riders drafting to the finish line. Mees pulled around current GNC points-leader Sammy Halbert (Kings Kustoms/LZ Racing) to lead only his second lap of the race---- the most important, final lap. Defending Grand National Champion Zanotti Racing's Jake Jonson finished third just .06 seconds back, and Halbert picked up one bonus point for leading the most laps.

Harley-Davidson Motor Company's Kenny Coolbeth and rookie sensation Brad Baker (Lloyd Brothers Motorsports/Team HurtByAccident) renewed their heat race battle two seconds off the leaders' pace. Baker, who had set the fast time in Qualifying and won the first heat, was able to push his potent Ducati to the front early in the race, but the powerful machine developed a nasty head waggle and the youngster did a great job reining it in. After swapping the position several times, Coolbeth was finally able to make a pass stick on lap twenty.

In all, five different brands were represented in this year's Springfield Mile, as Harley-Davidson, Ducati, Kawasaki, Suzuki, and Triumph were all players in the main.

The twelve-lap Motorcycle-Superstore.com Pro Singles main was up next, and it was yet another barnburner as the top eight riders finished within a single second. Western Hills Honda's Zakk Palmer came away with the win, emerging from the pack to lead Weirbach Racing's Mikey Martin and Scott Powersports' Jake Shoemaker to the podium.

AMA Pro Motorcycle-Superstore.com Pro Singles points-leader Gerit Callies missed the main by one position in his heat, but still holds the championship lead by one point over Avila heading into today's TT action.
The last race of the day was the four-lap Dash for Cash, a six-rider event for which one thousand dollars and five points are on the line at each stop on the schedule. Overall points-leader Halbert was able to draft by Moroney's Harley-Davidson's Bryan Smith at the line, Halbert once again proving himself master of the Dashes. He currently holds a 16-point lead over defending Grand National Champion Jake Johnson. 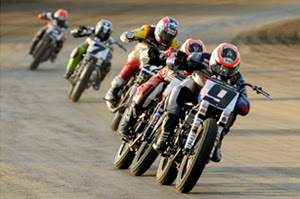 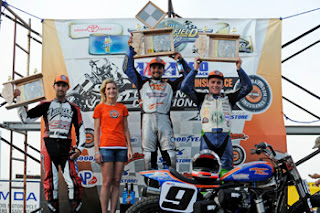 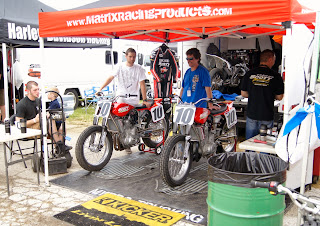 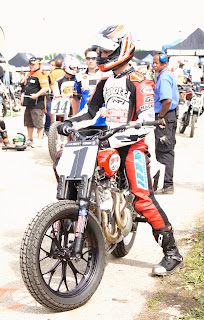 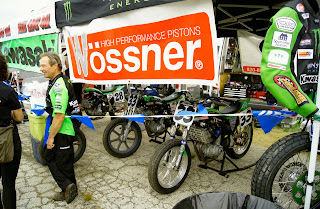 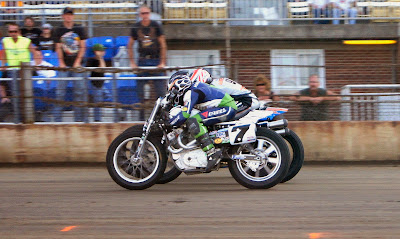 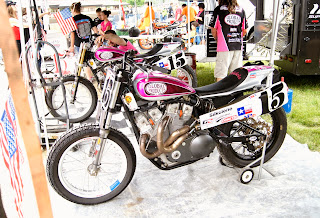 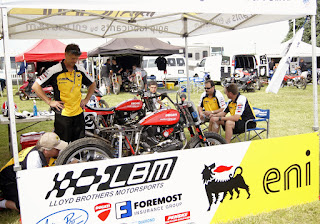 Here's the story of the race thanks to Larry Lawrence and Cycle News.com:

Here is the link to the results for round 6 of the 2011 AMA Pro Flat Track Harley-Davidson Insurance Grand National Championship Series at the Springfield Mile over Memorial Day Weekend thanks to AMA Pro Flat Track:

And last, but not least, here is the link to the complete results section for the Springfield Mile, again thanks to AMA Pro Flat Track:

Be sure and stay tuned to Stu's Shots as we will have another photo extravaganza later in the week from Monday's Springfield TT!