Hayes launched smoothly into the lead off the start, Young attached to his rear wheel with Martin Cardenas (M4 Suzuki) and Tommy Hayden right behind. A few bike-lengths behind the lead trio, Roger Hayden (National Guard Jordan Suzuki) led a train of riders all looking for a way by, Iron Horse BMW's Chris Peris heading JD Beach (Cycle World/Attack Performance Kawasaki), Steve Rapp (San Jose BMW), Ben Bostrom (Jordan Suzuki), and Larry Pegram (Foremost Insurance/Pegram Racing.) With the stage set for the sixteen-lap contest, the riders got down to business.

Cardenas, coming off an Infineon Round 2 podium-finish but having qualified a disappointing sixth here at MMP, declared himself an immediate factor in today's race, setting himself up just off Young's rear wheel as the factory Suzuki rider continued to pressure Hayes. Fourth-place Tommy Hayden wasn't giving the Colombian rider any room, however, while back in seventh position, a new contender was about to announce himself.

Beach, the 19-year-old class rookie (MMP was his second career SuperBike race), notified the field of his intention by posting the quickest lap the race had seen yet, then making a move that carried him up into sixth position, just a bike-length behind Roger Hayden. Behind them, Peris tucked the front, crashing out of eighth and allowing the second group of riders to shuffle forward in the standings. 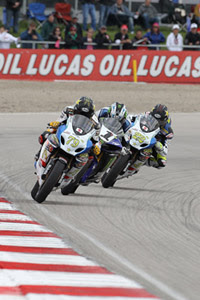 With ten laps to go, Roger reclaimed fifth from Beach and shut the kid down, at least for the moment, and all eyes returned to the battle for first between Hayes and Young, which had meanwhile been joined by a head-down Tommy Hayden. As the top three tore down Miller's 3,500-foot straightaway, Young set up a pass and took over the lead seconds later, only to see Hayes immediately strike back. That kicked off a chain of lead-swaps that wouldn't abate in number or intensity throughout the rest of the race, as Hayes and Young ripped toward a last-lap showdown.


With just five left to go, Beach had retaken fourth from Roger and was looking solid, but just seconds after Pegram was left ride-less thanks to a mechanical, Beach lost the front and went down in Clubhouse Corner, his bike tumbling end-over-end along with his hopes for a top-five finish.

At the front, Young pushed Hayes back behind him, sandwiching the Yamaha between the pair of Suzukis as Young took a glance behind to be sure it was true. It wasn't---- at least not for long---- as Hayes punched his way to the front again and did everything he could to break away. Young and Hayden were far from about to let that happen, however, Young trading the lead with Hayes several more times as the trio headed for the last lap.

Though Hayes was first to take the white flag, Young was already setting him up as they approached Turn 1 for the last time, delivering the final blow seconds later when he swooped into the lead and managed to spin out a few bike lengths in his forward charge. Hayes rode the wheels off his Yamaha as they filtered through the last set of turns, running up on the curb and giving Hayden a momentary look at second, but Young had the lead in hand as the frontrunners poured out onto the front straight, taking the win by .757 seconds.

As the series heads for next weekend's Round 4 at Elkhart Lake's Road America, June 3-5, Hayes leads the overall AMA Pro National Guard SuperBike Championship by five points over Young, 134 to 129. Tommy Hayden sits third with 122. 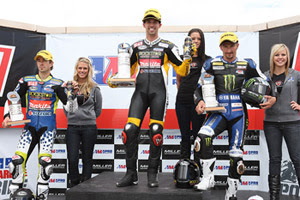 Blake Young, 1st: "For the beginning of the race I just tried to settle into a comfortable pace and just really try to hit my marks, and just for some reason I found myself not being able to do that. When I'd allow myself to get comfortable, Josh would get a gap that was a little bit more than that I was comfortable with him having, so I'd have to run it back down and settle back into my pace again, and it just didn't seem like that was the way to win the race. So I made the decision that I was just going to put my head down from there, and halfway through, I just tried as hard as I could to the checkers and left it all on the track. I'm pretty comfortable racing with either one of these guys handlebar-to-handlebar like that, because they know what they're doing there out there. And I'm glad I did that; I think it was great racing, I had a great time racing out there, and it was hopefully a good show for the fans."

Josh Hayes, 2nd: "I felt that if we were all on the same boat and all had tires go off at the end, that it would be harder to pass than it would be to lead. If I could kind of dictate how the race was going ... I'm a little more comfortable at the front. At the same time, [I was thinking] if he is faster than me, I don't want to allow him that opportunity, so I have to attack right back. I didn't really know how it was going, but I know I had a plus-zero on my board the whole time, then he started coming up alongside and, you know, it was just good racing. We'd get alongside each other and neither wanted to give up. You try to be respectful and safe---- if he was inside of me, I tried to leave him at least a way out---- and he treated me a little bit the same, and hopefully the TV was on us for a lot of that, because I thought it was a pretty damned good race."

You can read the full race weekend rundown at the Big M Weekend in Tooele, UT. here thanks to Henny Ray Abrams and Cycle News.com:

And thanks to AMA Pro Road Racing for the link to the complete results of the Big M Weekend at Miller Motorsports Park over Memorial Day Weekend: