Young, however, wasn't about to let his home track and hometown fans down: for every challenge from Hayes, he had a swift and aggressive answer. While Hayden, in a repeat of the class' Miller Motorsports Park action, watched the fury from third, Young and Hayes traded the lead as if there was a point available for most seconds lead, as opposed to most laps.

While Cardenas and Pegram diced for the lead, the former retaking it, Hayes and Young, who had tied for most laps led, tore toward a tiebreaker, continuing to exchange the frontrunner position. As the white flag flew, Hayes was tucked in tightly behind Young, poised to strike, while Hayden likewise maneuvered for position. When Hayes made his move, however, it was an attempt up the inside that didn't hold, Young hanging on and Hayes going wide. Though Hayes managed to prevent Hayden from capitalizing on the bobble, it shook him back enough to give Young a few bike-lengths of safety while heading for the checkers. 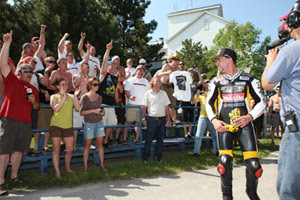 At the line, Young took the win by .440 seconds over Hayes, with Hayden heading Cardenas, Pegram, Roger Hayden, Bostrom, Clark, Farrell, and EBR Racing's Geoff May. Young's win put him tied in the championship points standings with Hayes at 160 points, the advantage currently with Young and his four 2011 victories. 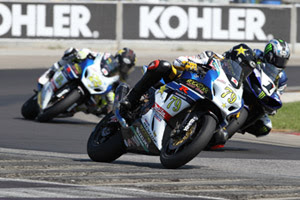 Blake Young, 1st: "This race kind of felt a little bit like Utah, you know, where I just ended up on the better side of things at the end of race, but I know it's not going to be like that forever. It just seems like it falls right for me, when it does. Josh was riding hard and then he kind of laid off me and I thought, 'He's going to see what I got,' but it seemed like as soon as I got out front, maybe I was riding more defensive and not doing the lap times I should have been doing. I definitely think tomorrow's race is going to be a lot more difficult. That being said, I think it's going to be a lot faster. I'm just happy. Happy to be home, happy to be at Elkhart Lake, happy to give a good show for the home crowd."

Josh Hayes, 2nd: "It was a good race, a lot of fun. I probably didn't take every opportunity I had to jump in there; I tried to settle down a little bit and let Blake take the lead and tried to make him work hard. At one point I got through and got a few good clear laps, and I thought I could get the pace a little faster than I did, but maybe I got a little lazy made a couple mistakes. It was hard to find the same rhythm I had in practice and qualifying; it seemed like the lap times dropped a little bit, but I thought we could go a little quicker than that, and unfortunately that didn't happen today."

Tommy Hayden, 3rd: "I'm ready for a new view. Those guys were riding really good ... when they were basically side by side every corner, there's only so much track left, so I just tried to hang in there. My bike was working well, and toward the end it seemed like I was getting close to Josh a couple times, but in the end I just couldn't make it happen. I thought I had a pretty good shot there on the last corner, but for whatever reason couldn't carry the speed I thought I could up the hill to get by him. Luckily, tomorrow we'll get another shot at it. It felt close."


ELKHART LAKE, WI (June 4, 2011) - AMA Pro Daytona SportBike's Race 1 lost one of the class' most dominant riders early in today's contest, kicking off an unusual three-way battle for the lead that stretched nearly from start to finish-a contest that came within a single lap of crowning an all-new class winner.

Shortly after the field started Lap 2, however, DiSalvo-by that point a few tenths ahead of Herrin-crashed out of the lead, leaving Herrin to contend with the two youngsters behind him, both new to the Daytona SportBike class this year. While the battle for fourth continued to fan out three- and occasionally four-wide at times, and while Jake Holden crashed out of ninth position, the lead trio maintained, none of them seeming able or willing to advance on the rider in front.

Suddenly, Jacobsen took over the lead, sandwiching Herrin between himself and Beaubier, who likewise seemed to be eyeing the far more veteran rider. As Herrin continuously tested Jacobsen, frequently running up alongside him on the front and back straights (once briefly taking over the lead), Beaubier stayed stuck to Herrin's rear wheel. The GP Bike Parts rider made his intentions clear by pulling up alongside Herrin then sliding into the overall lead, but then immediately went wide, quickly being relegated back to second by Jacobsen, then to third by Herrin a few turns later.

As Herrin continued to put pressure on Jacobsen, Beaubier flexed his newfound speed a few more times, retaking second briefly and making another attempt at the lead. The second pack had by now seemed to loosely agree to set out after the lead trio, however, and the dicing inspired at the front by Beaubier allowed them to begin to gain ground.

With three laps to go, the lead trio maintained their running order while West, Eslick, and Aquino all took their turns at the head of the second group. Up front, Jacobsen and Herrin, the former riding the wheels off his Ducati to try to shake the Yamaha rider, began to leave Beaubier behind. As the lead pair spun out an increasing gap on Beaubier, it became clear the latter was in serious danger of being sucked into the group charging up the track behind them.


As the leaders approached the white flag, a game changer was delivered in the form of a lapped rider. While Herrin negotiated the situation perfectly, Jacobsen was shuffled back in the chase group and Beaubier sucked in almost entirely, the group suddenly spreading five wide and spitting West out as its new leader. Herrin, meanwhile, had netted some breathing room for the final lap and crossed the line .749 ahead of second-place West, Jacobsen hanging on for third. Eslick, Aquino, Taylor Knapp, Beaubier, Westby, Jason Farrell, and Fernando Amantini rounded out the top ten, the field treating fans to a four-rider-wide wheelie show. 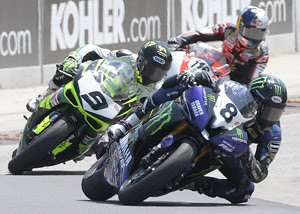 Josh Herrin, 1st: "Luckily [DiSalvo] had a couple tenths on me, so I didn't get tangled up with him. I think Cameron was pretty excited to be up there-he's new to the series and just wants to get out in the lead-but it kind of hurt me and PJ a little bit; we were definitely losing time when he'd get out in front of us, and then burning our tires trying to get back past him. [In the final laps] I thought PJ was right behind me, but I put my head down and rode as hard as I could on the last lap and didn't hear anyone behind me in the last corner. I'm sure tomorrow will be a different story, especially with DiSalvo up there."

"It sucks to see someone fall, but when you know they're okay and you realize you just got a bunch of points you desperately needed, it's kind of a big relief."

Cory West, 2nd: "After the halfway flag I could kind of see we were gaining on [the lead group]. But it was tough-Danny and Tommy were pushing me hard. We started dicing it up ... and every time someone got to the front, we were like, 'Okay, let's get those guys!' We slowly started reeling the leaders in ... they were dicing pretty hard, which helped us catch up. Coming to the white flag, I knew for sure we'd catch Cameron, and then the lapper helped me catch PJ. I might have had something for [Josh] with one more lap. It was a good race. I'm glad to get second and start getting some points in this championship."

PJ Jacobsen, 3rd: "It was great. Josh was running great, so I just tried to push, same thing as at Miller; tried to get out front and stay out there. That last lap, it kind of sucked for me, but that's racing. We'll just try to go out there and get him tomorrow. We'll definitely be up there again, it's going to be a good battle between all of us, so I'm looking forward to it. [Leading] felt pretty good, I just knew I had to be calm and stay calm the whole time. I just kept working and working, and unfortunately the last lap I just lost all that ground, so we'll come back strong tomorrow."


AMA Pro Racing is the premier professional motorcycle racing organization in North America, operating a full schedule of events and championships for a variety of motorcycle disciplines. Learn more about AMA Pro Racing at www.amaproracing.com.