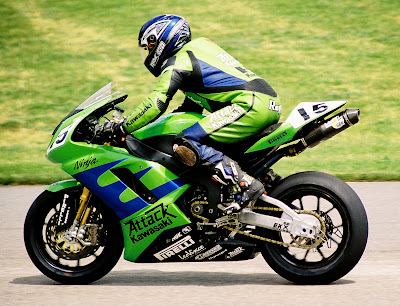 2007 Daytona 200 winner Steve Rapp sets up his #15 Attack Performance/Kawasaki Motors Corp/NGK/Pirelli-backed ZX-6R for a turn at Road America during a practice session for the AMA Formula Xtreme Series in June of 2008 at part of the AMA Pro Road Racing Suzuki Superbike Doubleheader Weekend at the Elkhart Lake, WI. track.  Rapp would go on to qualify third behind eventual '08 Formula Xtreme Champ Jake Zemke on the Erion/Parts Unlimited Honda and '06-'07 Formula Xtreme Champ Josh Hayes on another Erion Honda.  He went on to finish out the weekend in the fourth spot in a race run under heavy rain conditions behind winner Aaron Gobert on a Rockwall Honda, runner-up Zemke and 3rd place finisher Larry Pegram on his Pegram Racing Ducati.

Having raced in the AMA Pro Road Racing Series now for over a decade-and-a-half, the California resident first showed promise in the AMA Supersport Series in the mid-late '90s, and eventually signed to ride with the powerhouse Vance & Hines Ducati as a team mate to former AMA 250 GP, World 250 GP and World Superbike Champion John Kocinski for the 2000 season.  Rapp may be famous to some fans for his turn one get off at high speed at Road America in June of 2000 in race one of the AMA Superbike Championship Series stop at the Wisconsin track.  In what was caused by contact with another rider as the pack headed into turn one after the start, the bike literally flew through the air flipping across the track, which in turn caused the ultra high-dollar front forks on the machine being torn off of the bike as it acted like a Super Ball bounding down the tarmac and exploding into pieces.  It was one of those crashes that even seasoned fans shook their heads about, thankful that no one was seriously injured!

Rapp signed to ride with the then-fairly new to AMA Pro Road Racing Michael Jordan Motorsports team for the '05-'06 seasons in the AMA Superbike Championship and AMA Superstock Championship.  After hooking up with the Attack Performance Kawasaki team in the 2007 season, Rapp started off the season leading 39 of 68 laps to win the Daytona 200 by Honda event over team mate Ben Attard, and went on to finish the season in the 2nd ranked spot behind Josh Hayes.  He would finish in the 3rd spot for the 2008 AMA Formula Xtreme Championship behind Jake Zemke and runner-up Hayes.

TOOELE, UT (May 30, 2011) - Drag Specialties' Michael Barnes launched into the lead of Monday's AMA Pro Vance & Hines XR1200 event at Miller Motorsports Park's BigM Weekend, only to be forced back to third a lap later by a hard-charging Steve Rapp (Parts Unlimited) and Chris Fillmore (Bruce Rossmeyer's Daytona Racing), Fillmore pressuring Rapp unmercifully as the field blasted through the start of the eight-lap contest.

Rapp took over the lead with just four laps to go, followed within a second by Fillmore, Barnes, and the reigning class champion, RMR Bruce Rossmeyer's Daytona Racing's Danny Eslick. Eslick, however, had other plans for the running order, quickly getting up the inside of Fillmore and setting his sights on Rapp. A string of riders following behind the lead trio, Fillmore made a close inside pass on Eslick to retake second position. And though Fillmore rebuffed Eslick's first attack, which came almost immediately, he was forced to cede the position several turns later. 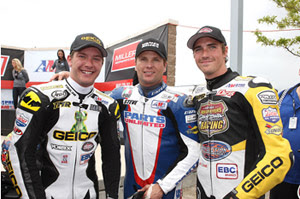 Elbows out, Eslick and Fillmore took the white flag almost side-by-side, having left Barnes several seconds behind but simultaneously lost touch with Rapp, the latter rider now unstoppable more than a second ahead. The pair swapped position heading for the back section of the Utah track, Fillmore making a final bid for the second step but ultimately unable to fend off Eslick, who blasted by and made it stick as the pair tore onto the front straight for the final time.

As the series heads for next weekend's Round 4 at Elkhart Lake's Road America, June 3-5, Fillmore leads the overall AMA Pro Vance & Hines XR1200 Championship by six points over Rapp, 78 to 71. Wyman sits third with 51 points. 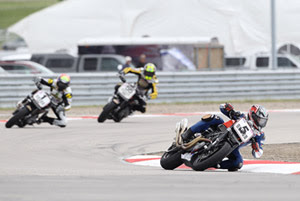 You can view the full results from round 3 of the 2011 AMA Pro Vance & Hines XR1200 Road Racing Series from Miller Motorsports Park here thanks to AMA Pro Road Racing:

And here is the link to the current point standings in the 2011 AMA Pro Vance & Hines Road Racing Series after three rounds.  Round 4 comes up this coming weekend at Elkhart Lake, Wisconsin's Road America: