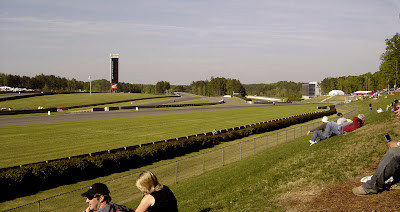 DAYTONA BEACH, FL (June 15, 2011) - Two weeks after the spectacular racing at Wisconsin's Road America circuit, AMA Pro Road Racing is back in action this weekend at the Birmingham-area's lush Barber Motorsport Park. From June 17 through 19, the central Alabama facility plays host to the Barber SuperBike Classic, which will feature edge-of-your-seat racing plus a number of activities in support of the Alabama National Guard, including special ticket offers for Guard members and their families.


The Motorcycle-Superstore.com SuperSport class, meanwhile, is still wholly up for grabs, five different riders having already won 2011 races in pursuit of championship crowns and the Motorcycle-Superstore.com $25,000 points-fund bonus. Barber Motorsports Park's Round 5 will be the third East Division SuperSport race on the calendar-a coast LTD/Y.E.S. Yamaha's Tomas Puerta is currently firmly in control of, while teammate David Gaviria owns the West Coast points race. Roadracingworld.com's Benny Solis, however, has proved a winner on any given day, and a whole host of other young riders are also coming on strong, including Corey Alexander (Vesrah Suzuki), Travis Wyman, Elena Myers (SuzukiScoopFans Racing), James Rispoli (ANT-Racing.com Suzuki), and Dustin Dominguez (Team Latus Motors Racing).
And finally, having just celebrated its one-year anniversary, the Vance & Hines XR1200 class is flexing its new maturity in a big way, boasting increasingly deeper fields of riders and a rash of diverse talent. When Chris Fillmore (Bruce Rossmeyer Daytona Racing) took his second victory of 2011 at Road America, he did so by defeating a staggering seven riders after a seesaw battle that saw the chase train cross the finish within a second of the race-winner. Fillmore is currently followed in the standings by Parts Unlimited's Steve Rapp and Fillmore's Bruce Rossmeyer teammate, Kyle Wyman.
Fans in attendance on Saturday are encouraged to stay late for some face-time with their favorite riders, as AMA Pro Racing, Barber Motorsports Park, and ZOOM Motorsports are hosting a special Track Walk at 5:30 p.m. to benefit local victims of the tornados that devastated the area in late April. For only $10, fans can walk all or a portion of the track while talking race strategy with AMA Pro stars; tickets can be purchased either upon Saturday entry at Gates 2 and 10, or in Lot E prior to the start of the walk.
For event tickets and information, visit www.barbermotorsportspark.com. For TV broadcast dates and times for Barber SuperBike and Daytona SportBike action, visit www.speedtv.com. Motorcycle-Superstore.com SuperSport and Vance & Hines XR1200 can be viewed lived on Speed2.
To learn more and be a part of AMA Pro Racing, please visit www.amaproracing.com and join us on facebook.com/AMAProRoadRacing and twitter.com/AMAProSBK.

You can follow all of the action this weekend at OR away from the track on AMA Pro Road Racing's Live Timing and Scoring here:

Here's the link to the weekend's activities for the Barber Superbike Classic, round 5 in the 2011 AMA Pro Road Racing Series:

And you can find all of the complete results (PDF versions) as well as entry info here thanks to AMA Pro Road Racing: