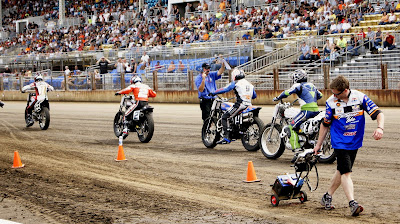 Riders roll out for a qualifying session during round 6 of the 2011 AMA Pro Flat Track Harley-Davidson Insurance Grand National Championship Series at the Springfield Mile on May 29.  After a several hour delay that involved the help of AMA Pro Flat Track's Steve Morehead and crew drying and prepping the track after the rain/hail deluge from the previous day, the first Twins Series qualifying round of the season was underway.

Jake Johnson on the #1 Zanotti Racing/Schaeffer's H-D/MotionPro/Arai-backed XR-750 is the first to head out from this group of riders that left the Springfield Memorial Day Weekend doubleheader round in the top four of the overall championship point standings, with 7 races down & 15 scheduled to go in the 2011 season.

In the young season, Johnson is already showing that he is as serious as ever to retain his #1 plate after having won the 2010 AMA Pro Flat Track Grand National Championship.  With a 3rd place on the mile to go along with his win on the TT at Springfield, Jersey Jake doubled his win total (Salinas TT) and added to his great run of top 5 finishes on the year.  Currently 2nd in the championship hunt to leader Sammy Halbert #7 (145-138 points), the #1 rider and team are again putting up the kind of results that garner you a championship in the Rolling Thunder Show, the greatest sport on wheels.

Kenny Coolbeth, Jr. on the #2 Harley-Davidson Motor Co/Screamin Eagle/Spectro Oils/Fox-sponsored factory H-D XR-750 gets some air as he follows Johnson out to qualify.  Coolbeth also had a solid Springfield in May with finishes of 4th on the mile and 6th on the TT, and with his win on April 16 at the DuQuoin Indoor Short Track, is making a good case to add to his 3-Time AMA Pro Flat Track Twins Championship & '07 Singles Series Championship.  Heading to Hartford on Saturday, The King of Cool sits in the 4th spot in the championship with 104 points, at present the only man other then the top 3 with over 100 points thus far into the season.  After a 'dry' spell of wins between the 2009 Lucas Oil Indy Mile and his win on the Canterbury Park Mile in Minnesota in September of 2010, Coolbeth is letting everyone know by his results that he is just as hungry as ever.  And he seems to be having a lot of fun doing it, too!

One of the Rogers Lake Racing crew members rolls Jared Mees' starter off of the track as the AMA Pro Flat Track official gives the #9 Rogers Lake/Blue Springs H-D/Lucas Oil/Saddlemen-sponsored, XR-mounted rider the 'time to go' signal.  Jammin Jared signed off a couple of things on his 'bucket list' over the weekend of events at Springfield.  Winning his first Springfield Mile (in almost a decade of active competition) was one of those, and ending his 'dry spell' of no wins since 7/7/07 (Joliet Half Mile) was the other.
At the postponed TT the next day, he came in runner-up to Johnson, missing the top step by just over 1.3 seconds.  Mees heads to Michigan 3rd in the overall championship standings with 112 points and a good shot to add to his already-consistent string of finishes over the course of the last two seasons.

And the last rider in our current-top 4, Sammy Halbert on the #7 Kings Kustoms/LZ Racing/KK Supply/Nelson Racing-backed XR-750, also had a very good weekend at the first Twins Series event of the year at Springfield.  Coming in 2nd to Mees on the mile (.016 seconds back), he also won the Dash for Cash event at the end of the day.  At the TT, he overcame a 4th row restart after the red flag, to come home 5th on the day, leaving Springfield with the championship points lead he has held since winning the opening season doubleheader rounds at Daytona back in March.
With the drive and determination this young racer has, his quest to win the 2011 AMA Pro Flat Track Harley-Davidson Insurance Grand National Championship is looking bright at this part of the season.  Whether you are a fan or not of Slammin Sammy, you have to respect his ability to get top 5 results no matter what the circumstances are.  And he is putting up good, solid results where and when it counts!

DAYTONA BEACH, FL (June 5, 2011) - The AMA Pro Harley-Davidson Insurance Flat Track Championship will visit the Hartford Motor Speedway in Hartford, Michigan, for the first time in its history this Saturday, June 11. Known as the "Wicked Fast Half Mile," the high-banked oval has held a number of high-profile car races, but AMA Pro's Round 8 will mark the first time Hartford has played host to the country's premier flat track racing league.


Fresh off the Springfield Mile, the big twin-cylinder bikes will be featured again for only the second time this year. Additionally, the multi-brand racing continues at Hartford, with the venerable Harley-Davidson XR-750 going up against steep competition from Kawasaki, Ducati, Triumph, Suzuki, and KTM. 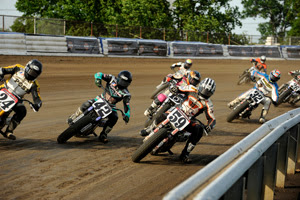 Another Michigan rider of note is Bryan Smith, who returned to the Harley-Davidson fold aboard the Fasthog.com/American Harley-Davidson-backed XR-750. Mechanical problems resulted in Smith dropping out of the lead pack at Springfield, but he did finish second to Halbert in the Dash for Cash.

Also from Michigan is Nichole Cheza, the only woman to regularly contest the Grand National circuit. Cheza qualified for her first main at the recent Springfield event and raced her Global Products/Harley-Davidson-backed Harley to a respectable 12th-place finish.

Meanwhile, 2009 Pro Singles Champion Brad Baker celebrated his inaugural ride on his Lloyd Brothers Motorsports/HurtByAccident.com Ducati by being fast qualifier, taking a heat win, and carding a fifth-place finish in the main event. Together, this all but guarantees Baker Saddlemen's Rookie of the Year title.

Also on the docket for Hartford is the AMA Pro Motorcycle-SuperStore.com Pro Singles Championship, which runs stock-framed motocross bikes that have been modified for the oval track. This class is a stepping-stone for the Grand National Series and features mainly up-and-coming riders under the age of 18. There's no official age limit to this class, however, and several well-known veteran riders have found a home in the series as well.

Here's the weather link for Hartford, MI. courtesy of The Weather Underground:

And here is where you can find the Hartford Motor Speedway in Hartford, MI., courtesy of Google Maps:

And here is the overall event results page.  You'll see round 8, the Hartford half mile on the lower left column as you scroll down:

Here is the link from AMA Pro Flat Track for the event info, including the day's schedule, for the Hartford round on June 11:

And Ms. Flat Track Live herself, Miriam Deitcher will be at the Hartford round keeping those of us who aren't going to be able to make this round up to date on what is going on via her Flat Track Live Facebook page.
If you haven't been following Miriam's updates from the track, you've been missing some of the best and most complete coverage possible broadcast into the home's and laptops of those who aren't on location at each event: