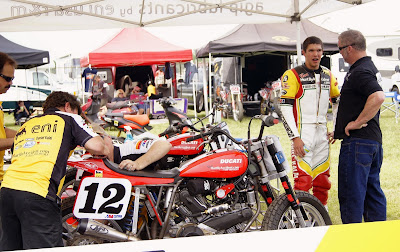 The Lloyd Brothers Motorsports team is hard at work during round 6 of the 2011 AMA Pro Flat Track Harley-Davidson Insurance Grand National Championship Series at the Springfield Mile on May 29.  The first Twins Series event on the schedule, the team debuted their new rider and new National #12, Brad Baker, on their Ducati HyperMotard-based machines for the new season.

In the shot above you can see Brad talking with his Father, Kip, while the other members of the team work on the LBM Ducati.  (L-R) Lyle Pizzino (VMC Racing Frames/Pizzino Fabrication) who does the frame fabrication for the team, Kevin Atherton (former National #23 and one of Stu's Shots' ALL-TIME AMA Flat Track favs!) who helps with bike set-up and as a rider-coach for Baker, Dave Gamble, the team's head wrench and also one of the team's fabricators (kneeling between bikes and partially hidden), and Bullet Baker and his Dad, Kip.  Team co-owners Mike & Dave Lloyd are working/overlooking the team's progress throughout the team's pit area and are just out of this shot.

After losing '00 AMA Grand National Champion Joe Kopp to retirement after the end of the 2010 season, the team went on a big hunt to bring in a rider that would work well and 'gel' with the veteran team for the 2011 season.  At first looking towards signing 2-Time Singles Series Champ Henry Wiles (who had previously worked with and for the team), things didn't fall together completely until later then planned, and Wiles had to go another route.  Lo and behold, the team was able to acquire the services of Brad Baker, the '09 AMA Pro Flat Track Pro Singles Champion and former AMA Horizon Award winner for the upcoming season.

With Springfield being the team AND rider's first event together-they had done some testing several weeks earlier at a track in Ohio to get Brad a 'feel' for the Ducatis-Brad came out of the box on the Lloyd Brothers Motorsports/TeamHurtByAccident.com/Foremost Insurance/ENI USA-sponsored Ducati and not only set fast time in practice, but also in qualifying-out of 57 riders that timed in on May 29.  He then went on to win the fastest heat of the day, qualifying for the Dash for Cash as well as the National main event.  At the end of the day, he had brought the bucking Ducati home in the 5th spot in the main-the first non-H-D XR-750 in the field of 18 riders-and to a fine 3rd place finish in the Dash.  Not too bad for his first ride with the team by anyone's standards, handling problems or not!

Brad 'The Bullet' Baker struggled somewhat at his second event with the team, round 8 on June 11 at the Hartford Motor Speedway half-mile event.  A track that grooved up quickly, he was coming to terms with throttle control and the bike on the slippery surface before running out of time in his heat race.  But come semi time, Brad turned it around and pulled out the win to punch his ticket for the main event.  Unfortunately, the end results weren't as strong, but he still brought the LBM Ducati home in the 17th spot in the 18 rider field, just over 15 seconds behind winner Jared Mees.  All the while, though the results may not show, he was coming to grips with the slippery surface, and as the night wore on, his lap times were steadily progressing and were some of the best and most steady of the entire field.

You can find out more about Brad and what he holds in store for his future here, thanks to Larry Lawrence and Cycle News.com.  LL caught up with The Bullet at the Springfield Mile and Brad spills some beans on what he has in mind for his future in racing.  Whatever that may be, you'll have to click and read on to find out, but the man who is out front in the running for the 2011 AMA Pro Flat Track Rookie of the Year had an interesting AND enlightening conversation with LL on May 29 (as if there was any doubt):

You can check out more on Brad's new team, the Lloyd Brothers Motorsports Ducati team, right here.  Keep in mind that Dave & Mike Lloyd are putting on the Airfence Fund Raiser at all of the 2011 AMA Pro Flat Track Harley-Davidson Insurance Grand National Championship Twins Series events, and are selling raffle tickets for $20/each to help support the Airfence Fund for AMA Pro Flat Track.  The grand prize, that will be announced at the end of the season, is the '09 Buell XB12XP bike that was used as the AMA Pro Road Racing pacebike during the 2009 season.  Second place prize is a new Arai helmet.

Read on about one of the higher profile and most well-prepped teams that has been around AMA Pro Flat Track for over 20 years.  And be sure to help support them and the Airfence Fund if you get the chance.  It's a great cause for the greatest sport on wheels in the world:

And here is Brad and his brother Scott's website, Baker Boys Racing.  You can check out their news as well as their Facebook links to follow Brad and Scott throughout the year: