AMA Flat Track: Take a Spin With Sammy Halbert at The Springfield Mile 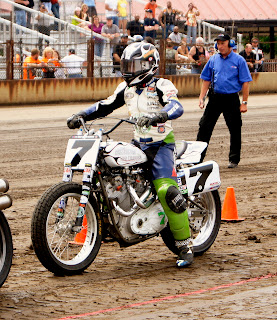 Sammy Halbert, National #7 on the AMA Pro Flat Track Harley-Davidson Insurance Grand National Championship Series circuit, is a media marketing machine.  Whether it be YouTube, Facebook or Twitter, the man knows how to get his and AMA Pro Flat Track's name out there to the masses.

One of his latest and greatest videos involved him strapping on his video camera during the on-track action to the back of his Kings Kustoms H-D XR-750 while participating in round 6 at the Springfield Mile over the Memorial Day Weekend.  And he got some killer footage!

Check it out here, and thanks to Sammy Halbert and his YouTube.com channel for this great action!  Grab hold tight and lay low to ease the draft as you take a ride around the Illinois State Fairgrounds mile oval with one of the best in the business in The Rolling Thunder Show: