As the only non-MotoGP class invited to participate in the Midwest and East Coast's sole world championship road racing event, the Vance & Hines XR1200 series will carry the flag for the intensely competitive, spec-based racing the AMA Pro championship has become known for. With a full field of nearly identical Harley-Davidson XR1200s, the class features handlebar-to-handlebar, footpeg-dragging action that highlights rider skill and strategy.

"This is an extremely important development for AMA Pro Racing," said company COO and Managing Member David Atlas, "and we're very proud to have been invited to race on the world stage as a companion to MotoGP. We're excited to be able to showcase our series on such a platform, and honored to have a relationship with partners like Indianapolis Motor Speedway and Harley-Davidson. We're looking forward to a fantastic event." 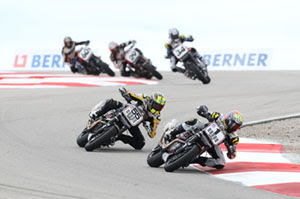 "We're thrilled to welcome AMA Pro Vance & Hines XR1200 racing to the Red Bull Indianapolis GP," said Jeff Belskus, Indianapolis Motor Speedway Corporation president and chief executive officer. "The distinctive rumble of Harley-Davidson thunder and close competition will provide even more on-track entertainment for our loyal fans and enhance what will be the motorcycle event of the year in the United States."

"The sound of Harley-Davidson motorcycles resonates with riders across the globe, and we are excited about this opportunity to bring the thunder of XR1200 racing to a worldwide audience at one of the greatest racing venues in the world," added Steve Piehl, Harley-Davidson Director of Customer Experience.

Of the top AMA Pro riders in the fiercely competitive XR1200 class, several have strong ties to the Indianapolis area, including current championship points-leader Chris Fillmore. "I just found out about it today," said the Bruce Rossmeyer's Daytona Racing pilot, "and it's super exciting. It sounds like there's a lot of interest from riders in other series and from other countries, so I think the field's going to be really, really stacked.
"Getting to line up on the same track, same weekend as a world championship is a great opportunity," Chris added, "and it'll definitely be close racing. I'm looking forward to it---- hopefully we can do something special."

Though Fillmore is eager to claim victory in front of local supporters and family, former race winners Steve Rapp, Michael Barnes, Kyle Wyman, and reigning XR1200 champ Danny Eslick won't make it easy for him, and they'll be joined by a grid full of equally determined H-D racers. 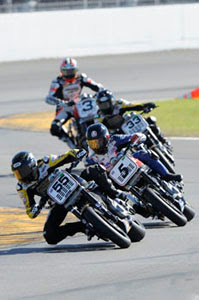 The AMA Pro Vance & Hines XR1200 division adds a fourth class of racing to the Red Bull Indianapolis GP weekend, as it joins the three World Championship classes---- MotoGP, Moto2, and 125cc---- competing on the 16-turn, 2.621-mile circuit that combines part of the famed IMS oval with an infield section.

Additionally, the Red Bull Indianapolis GP will be the final stop on the exciting Hole Shot Tour Aug. 24-28 for Harley Owners Group (H.O.G.) members. The Hole Shot Tour includes VIP perks at the Harley-Davidson Museum in Milwaukee followed by a ride to Indianapolis, where participants can watch the Red Bull Indianapolis GP, ride a victory lap around the IMS track, and watch Harleys in action at the AMA Pro Harley-Davidson Insurance Flat Track Championship event at the legendary Indy Mile at the Indiana State Fairgrounds. H.O.G. members can find more information at http://www.hog.com/.

For Red Bull Indianapolis GP ticket and event info, visit www.indianapolismotorspeedway.com. To learn more and become a part of the AMA Pro Road Racing Championship, visit www.amaproracing.com and join us on Facebook and Twitter.

Here's a short video of John Chisum riding his #10 Vance & Hines XR1200 at Road America today during practice.  Chisum ended up ranked 12th in the morning practice session.  This was shot coming up the hill and into turn 6 at the 4.05 mile track in Elkhart Lake, WI.

Thanks to Larry Lawrence at The Rider Files.com for putting this one up that he shot with his new Nikon CoolPix camera: