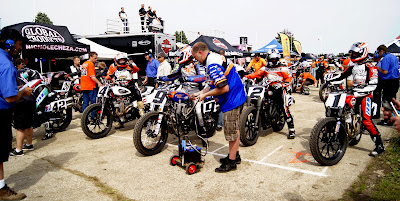 Some of the main protagonists in the 2011 AMA Pro Flat Track Harley-Davidson Insurance Grand National Championship Series are lined up and ready to go for the final qualifying session at the Springfield Mile on May 29.

Going into round 8 today (the second Twins Series event on the 2011 calendar) at the Hartford Motor Speedway in Hartford, MI., currently 5 of these riders are sitting in the top 6 of the overall point standings of the 2011 AMA Pro Flat Track Harley-Davidson Insurance Grand National Championship Series season.

Jersey Jake Johnson on his #1 Zanotti Racing machines has shown just about everyone that top 5's (and wins at the Salinas and Springfield TTs) are what he is capable of bringing to the table this year in defending his 2010 AMA Pro Flat Track Grand National Championship.  He currently sits 2nd in the standings just 7 points in arrears behind current leader Sammy Halbert (145-138 points.)

7-Time AMA Grand National Champion Chris Carr and his Chris Carr Racing/2011 Farewell to Flat Track Tour are putting up numbers that some of the 'young' guys would be proud of, let alone an over-25 year veteran of the series, in what is being billed as his 'swan song' to his illustrious riding career.  The Prince of Peoria sits 6th in the current overall standings as a result of his never-say-die attitude and ability to still run with the best under all types of conditions and on all types of tracks.  With a 3rd place finish at the DuQuoin Indoor Short Track to go along with three solid 6th place finishes (Salinas TT and Short Track, Springfield Mile I), Carr is putting in great results in his final year of competition.  He has 80 points in his current-6th place standing, 65 behind leader Slammin Sammy.

Kenny Coolbeth, Jr. is in the midst of a career-year by anyone's standards, but the 3-Time AMA Twins Series Champ and '07 Singles Series Champ isn't just anyone.  After his off-season switch to the Chaplin Kawasaki (having been on Bettencourts's Hondas for several years), coupled with his off-season training regimen, The King of Cool is putting up numbers that include a win at the DuQuoin Indoor Short Track and a 4th place finish at the Springfield Mile I.  Currently 4th in the overall standings with 104 points, look for KC to battle all-year long in his quest to add the overall GN Championship to his racing resume.

Jared Mees, fresh off his first win in almost four years, as well as his initial win on the Springfield Mile, is right back where he left off at the end of the 2010 campaign.  Mr. Consistency should be his mantra, as Jammin Jared is showing that no matter whether he is running the Singles or the Twins Series bikes, he is going to be there when the final checkers waive.  Currently 3rd in the overall championship standings with 112 points, anyone that doubts that Mees will be there in the end could be disappointed when the series wraps up at Pomona in October.

Sammy Halbert currently leads the overall standings after seven rounds, and is also putting up numbers that should see him fighting to the end to garner his first Grand National Championship.  Since his opening salvo round wins at Daytona, Halbert has fought extremely hard under adverse conditions to string together several 5th place finishes (DuQuoin, Salinas & Springfield TTs) and a 2nd place finish at the Springfield Mile I.  Slammin Sammy also has a Dash win under his belt from Springfield on May 29 to help him keep his point lead in front of the crowd that is fighting to catch him.

With the Twins Series kicking into gear for the summer haul, expect to see Bryan Smith work his way into contention with his new Fasthog.com/XR-mounted team.  After two break-out wins on the Werner Springsteen Monster Energy Kawasaki in 2010, Smith decided to go his own way after the Daytona rounds in March.  He has struggled massively in the Singles Series, where every movement counts in terms of milli-seconds, but with his new XR at Springfield two weeks ago, the #42 rider was back at the front on the mile oval, winning his heat in a thrilling to-the-wire effort.  Unfortunately during the main, his mount expired and the end result was a 17th place finish.  Look for those results to improve now getting into the 'meat' of the Twins Series schedule.

Matt Weidman should also improve on his current 10th place/47 points in the standings.  The cushion track season is upon us and his ability to wrestle a twin on those tracks should help play into his hands.

The 5th place rider in the current standings (and not pictured in this shot) is Brad Baker on the #12 Lloyd Brothers Motorsports/HurtbyAccident.com-sponsored Ducati.  After his stellar run at Springfield I two weeks ago, fighting off a high-speed wobble on the straights that just as easily could have put him into the ground, the 18 year old rider out of Washington State has amassed 99 points in the standings.  His 5th place finish at Springfield I, and his almost-win at the Salinas TT in his rookie season of Expert competition were just two examples of what this fine young man and future of the sport is capable of.

AMA Pro Flat Track World Finals Returning to SoCal Glory
DAYTONA BEACH, FL (June 10, 2011) - AMA Pro Racing and the Bellino-Morgan partnership are proud to announce that an agreement has been reached to bring professional flat track back to Los Angeles. On October 15, the AMA Pro Harley-Davidson Insurance Flat Track Championship will culminate in the AMA Pro Flat Track World Finals at the Fairplex in Pomona, where the best of the best in the flat track world will meet to decide which riders leave with crowns. 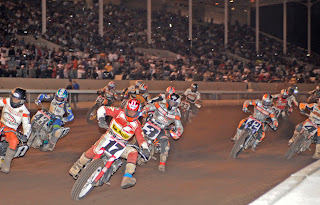 Here's the link to AMA Pro Flat Track's schedule list (which also includes event info, results, etc.) for the 2011 AMA Pro Flat Track Harley-Davidson Insurance Grand National Championship Series events.  Note that as of this writing that the schedule has NOT been updated to indicate the addition of the Pomona round to wrap-up the season: