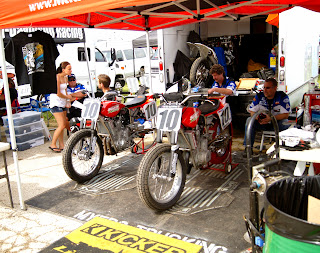 The Scott Powersports/Dubach Racing Developments/Saddlemen/Triple J Racing-sponsored team of National #10, Johnny Lewis, work on various jobs on the Kawasaki 650R-based mounts of Lewis' in the break between qualifying and the upcoming heat races at round 6 of the 2011 AMA Pro Flat Track Harley-Davidson Insurance Grand National Championship Series at the Springfield Mile on May 29.  JL10 can be seen in the left rear of the shot talking with some of the other members of the squad.

In his second full year of riding the 650R-based machine, Lewis is already showing that he more then has what it takes to compete at the top level in The Rolling Thunder Show.  At the first Twins Series event at the Springfield Mile over the Memorial Day Weekend, Johnny was the only Kawasaki in the main event after the Werner-Springsteen Monster Energy squad of JR Schnabel #33 and new rider Shaun Russell #28 failed to transfer out of their heats or semi races.  Lewis brought the #10 Scott Powersports machine home in the 8th spot on the day.

Lewis competed on the #10 Scott Powersports Kawasaki in the 2010 season, and even though he only scored points in 5 of the 11 events on the year, his prowess in the Singles Series events helped him and the team to finish out the season ranked in the 10th spot in the overall championship standings.  With 8 rounds down (of 22-scheduled) in the 2011 season, he currently sits in the 7th overall position with 92 points, with current championship leader Sammy Halbert #7 leading with 158 points.

With round 8 (and the second Twins Series event on the '11 calendar) at the Hartford, MI. half-mile on June 11, JL10 had a great outing on the machine, finishing 2nd in his heat (behind winner Jimmy Wood on the #37 Southland Racing Kawasaki) and 2nd in the Dash for Cash event (behind Dash and event winner Jared Mees on his #9 Rogers Lake Racing XR.)  Lewis ended up being only 1 of 2 Kawasakis in the 18 rider main at the Hartford Motor Speedway, and led the first 4-5 laps of the event, before finishing in the 5th spot on the evening.  It was also the first Twins Series event this fine young man and hard charger had ever led in the AMA Pro Flat Track Harley-Davidson Insurance Grand National Championship Series. 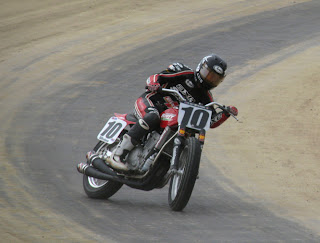 
AXO-sponsored Lewis started in the second heat race on the second row near the top of the track, an ideal spot for traction. He took advantage of the position and moved quickly into second off the start. A crash in turn two quickly red-flagged the race on lap one. Following the red flag restart, Lewis moved again into second by the first turn, competing in AXO custom black and red leathers with the new AXO Freedom Flat Track boot. After the first of eight laps, he was clearly pushing the leader and looking for a move. When Lewis could not find a spot to pass into the lead, he had to work on holding off a pack of three riders behind him. At the checkers after the ten laps, Lewis finished second which placed him into the main event and the coveted Dash for Cash.
In the four-lap Dash for Cash, Lewis had a third-place start. After the first lap, he found a spot to pass in turn two and moved around into second. At that point, the lead rider had too much of a cushion for Lewis to make a dent in this four-lap race. At the finish, he came in second on his Penske Racing-suspended Kawasaki. Lewis had the Dash for Cash best lap time with a 24.729 second lap.
In the 25-lap main event, Lewis was sitting in the middle of the front row on his #10 Scott Powersports Kawasaki 650. He rolled his Kawasaki off the line smoothly to ricochet himself into first for the first time in his young AMA Pro Flat Track career. His crew watched intently, including wife Alysha and bike builder Mike Scott, as Lewis led the field through the first lap, then the second lap. As he pushed ahead at the front of the field, his bike remained cooled by a FLUIDYNE radiator. On lap five, a bump and then pass from the second place rider pushed Lewis back to second. Lewis maintained that position for a few laps before being overtaken. His gearing was slightly off causing rear wheel spin exiting the turns which reduced his overall speed. After 25 laps, Lewis finished a career-best AMA Pro Flat Track GNC Twins race in fifth place.
“We knew after practice that the starting position and how we would come off the line was pivotal to the entire race,” said Lewis from Hartford Speedway. “There was literally one line out there tonight and moving slightly off it may cause catastrophe. A top three start was the goal in the main. When I holeshot the race and found myself in the lead on the first lap, I wondered where everyone went! It was a great feeling to lead for the first time. When I kept rounding the laps in first I focused on maintaining the line. We slipped back into the top five as the race neared its end. I am really happy with the finish. This was a huge step for our program. This race proved that our bike can run at the front and be competitive throughout the entire 25 laps. Now it’s fine-tuning our program so next time we are in that position, we are first at the checker flag! Thanks to Mike Scott and the entire Scott Powersports/Triple J Racing/DR.D team for all their hard work along with our other sponsors who helped make this finish possible.”
The Hartford Half-Mile fifth place finish moved Lewis up into seventh in the overall 2011 AMA Pro Flat Track GNC standings, only nine points out of the top five. It also shot him up into fourth in the GNC Twins standings.
Race fans head to the Allen County Fairgrounds in Lima, Ohio on Saturday, June 25 for the Lima Half-Mile, round nine of the AMA Pro Harley-Davidson Insurance Flat Track Championship.
Stop by the Scott Powersports pit to meet Lewis, enter his JL10 Sponsor Giveaway drawing and get an autographed poster, and then watch him on the historic racing oval riding his Scott Powersports/Triple J Racing/DR.D #10 Kawasaki 650 flat tracker in his custom AXO leathers.
Keep up with Lewis on Facebook at www.facebook.com/lewis10 and his new website at www.lewis10.com.
--------------------------------------------------------------------------------------------------------------------------- 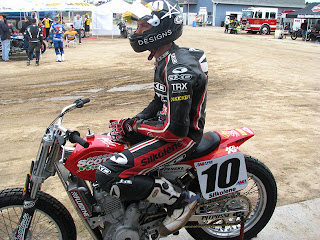