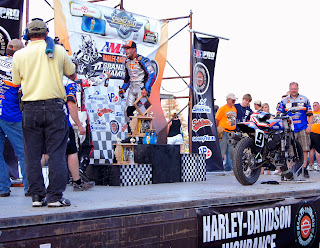 The celebrations are in full-swing at round 6 of the 2011 AMA Pro Flat Track Harley-Davidson Insurance Grand National Championship Series at the Springfield Mile on May 29.  Event winner Jared Mees had just taken his #9 Rogers Lake/Blue Springs H-D/Lucas Oil/Saddlemen-sponsored Harley-Davidson XR-750 to the win at the legendary Illinois State Fairgrounds oval, for what was his first main event win in almost four years, and his first win at Springfield in close to a decade of racing in the Expert ranks.

The 2009 AMA Pro Flat Track Grand National Twins Series Champion is in the process of getting a beer-bath by 3rd place finisher (and defending AMA Pro Flat Track Grand National Champion) Jake Johnson, who had just followed Mees and runner-up Sammy Halbert #7 home late in the day at the rain-delayed event.  Mees' tuner, Brent Armbruster, can be seen looking over the celebration just behind the winning Rogers Lake Racing XR.

Jammin Jared seems to have gotten on somewhat of a roll after his mile win at Springfield.  The next afternoon he came in 2nd to winner Johnson at the Rodeo Arena TT event, and then less then two weeks later cruised home to the win at the first-ever event held at the Hartford Motor Speedway at Hartford, MI. on June 11.  His run of great finishes in the last three events has helped him to jump from 5th in the overall point standings to 3rd (141 points), just 17 points in arrears to current championship leader Halbert (158 points), with Johnson in the 2nd position (149 points) after 8 of 22-scheduled rounds on the 2011 calendar. 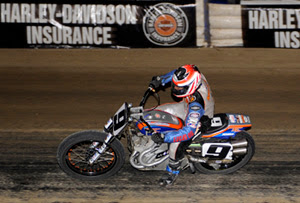 
Scott Powersports' Johnny Lewis got the holeshot on his Kawasaki and led the first six laps with Mees glued to his rear wheel. Mees was able to power by on lap seven going into Turn 3, and the race for the lead was over as Mees instantly began to gap the rest of the field. Lewis had Kenny Coolbeth and his Harley-Davidson Motor Company-backed machine to contend with for a few laps, but he couldn't hold off Coolbeth for long, and the latter took possession of second for good on lap eleven.
"When I got into second Jared was about half a straightaway ahead, and I thought I might be able to catch him," said Coolbeth. "But he just kept pulling away." Mees crossed the line with more than a 3-second win margin.
The day's fast qualifier, Fasthog.com/American Harley-Davidson's Bryan Smith, was able to secure the last podium slot on lap thirteen. Lewis, meanwhile, dropped back nearly another three seconds into a six-rider brawl for fourth with Lewis, Matt Weidman (White's Harley-Davidson), Chris Carr (American Motorcyclist/Dallas Fort Worth Honda), Jake Johnson (Zanotti Racing), Sammy Halbert (Kings Kustoms / LZ Racing), and Jimmy Wood (Southland Racing). 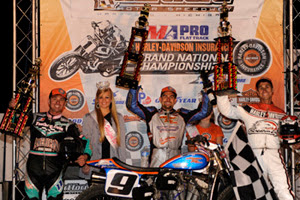