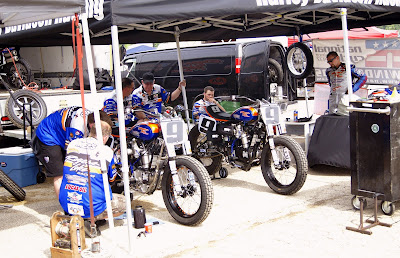 Jared Mees, AMA Pro Flat Track Grand National #9, looks over his Rogers Lake/Blue Springs H-D/Lucas Oil/Saddlemen-sponsored Harley-Davidson XR-750s while his Rogers Lake Racing crew preps his machines for the racing that lies ahead at the Springfield Mile on Sunday, May 29.  Round 6 of the 2011 AMA Pro Flat Track Harley-Davidson Insurance Grand National Championship Series at the Illinois State Fairgrounds mile oval saw the '09 AMA Pro Flat Track Grand National Twins Champion break his winless streak at the legendary track after almost a decade of trying.
Jammin Jared only led 2 of the 25 lap main event, but it was the second lap that he led that counted the most-by .016 seconds over runner-up Sammy Halbert #7 and 3rd place finisher Jake Johnson #1 by .068 seconds.  Mees also broke a winless streak of almost four years--having won his last Grand National race at the Joliet Half Mile on 7/7/07.
The man who in my book is and has been Mr. Consistency in the Expert class over the course of the last two seasons is making a great effort to fight for the top spot in the series championship after having done a super job of gaining podiums throughout the course of the 2010-2011 seasons.  Coupled with his 2nd place behind TT event winner Jake Johnson on Memorial Day, Mees now lies 3rd in the overall 2011 point standings (Halbert 145, Johnson 138, Mees 112 points) and is working on making the 2011 season a three-rider affair with now 7 of 22-scheduled races in the bag for the season.

Of note, Jared took his #9 Montgomeryville Cycle Center/Rogers Lake Racing-sponsored Honda CRF450R to the win last night, his third in a row, at the 27th Annual Dairyland Classic presented by Hoban Brothers in Plymouth, WI.  Mees bested a National-caliber field that included runner-up Sammy Halbert on his #7 and 7-Time AMA Grand National Champion Chris Carr on his Kenny Tolbert-tuned #4.

The weather did not look good for the Springfield weekend, but then again, the weather changes every minute in Springfield and I can probably predict its weather for the next 5 years: sunny with a slight chance of rain, partly cloudy... Covers all bases!! We got into the pit area with it being really cloudy, looking like bad weather was coming. Pretty much as we had finished unloading , got all set up and had the bikes teched and ready, the rain came crashing down. So the TT was postponed until Monday.

Right after we had left the pits, hail the size of golf balls came down. We all knew that next day’s Mile would be delayed since the haulers cannot cross the track when it is soaked. So I was able to sleep in a little and relax.

Sure enough, we could not cross the track until 11 am, instead of the normal 7 am. We got in, set up, but practice did not get going until about 2:30 pm. The decision was made to run only the Heat races to save time, taking the top 6 out of each Heat into the Main Event, no Semis to be run. The track wasn’t too bad when we finally got on it, a little choppy, but nothing like in 2009 when we almost got rained out. The first practice was actually the best shape the track was in all day. I qualified 11th overall. I knew I was better than what it showed, but the guys who placed higher may have had better drafts for the timed spot or maybe they just simply were faster.
I was in the 2nd Heat with Bryan Smith, Willie McCoy, Sammy Halbert and Nichole Cheza. Pretty stacked. I got the holeshot but Smith and Halbert passed me. I got back by them and for most of the race it was Halbert and me dicing it up. Then on the last lap Smith came up and was a player. Going into turn 3 on the last lap I was sitting 2nd behind Smith, then all of a sudden he hit a hole and went right up the track. I had to step off the gas and had no momentum to get me going quickly. Halbert and Smith got me at the line, and I ended up 3rd.

For the Main Event we made a gear change and put on the tire we thought would be best. I got off a good start from the second row, quickly getting into 4th off turn 4. There I was, playing with Jake Johnson, Bryan Smith, Sammy and Brad Baker. Baker, from the Pole, seemed to have the nod early on the fast 1200 Ducati. It was almost impossible to draft by that machine. As the race progressed, the track got dryer and rougher, making it harder for Baker to control his bike. We diced it up a bit and with about 8 laps to go Baker went into turn 3 and blew the corner badly. Time to leave the Ducati behind us and make it a Harley race, drafting each other much better!! By then it was Johnson, Halbert and myself going back and forth with the lead. With 5 laps to go Sammy was actually running away with this race but he went sideways really bad off turn 4 on the last lap. It gave me a huge run on him and made it within striking distance for the lap that counted the most. I came off turn 4 and was able to swing right by him for my first ever Springfield MILE Main Event win.

It was also my first win since 2007, almost four years. It felt like my very first win all over again. It was also the first Springfield Mile win for Craig Rogers, owner of my team. And the very first win for my mechanic, Brent Armbruster. Steve Beattie has been with us for the last couple of years, so for him also to be there and enjoy the moment was awesome for all of us on the team. It is every Grand National dirt tracker’s dream to win the Springfield Mile and it had just come true for us. I cannot thank my entire team enough!! 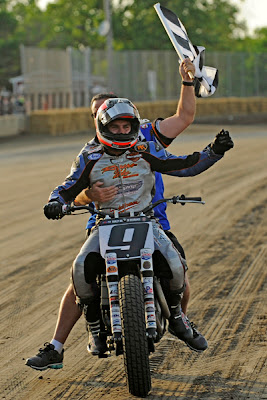 Not much time to celebrate yesterday’s Mile win. I did not sleep well... just jazzed up I guess. I woke up at 4 am, wired, and could not go back to sleep. It had sunk in that I had just won Springfield. At 6 am I had to get up to take the bikes to the track. It looked like it would be a hot and muggy day.

Practice went well. We made a change for the last qualifying session and jumped to 3rd fastest overall. That put me in the 3rd Heat with Bryan Smith, Kenny Coolbeth, Matt Burton and Raun Wood. I got a good jump behind Kayl Kolkman, but he fell in the right-hander, leaving me in the leading spot. After some hard laps I pulled away and won the Heat race with the fastest time, putting me in the Dash, with first pick of starting spot.

The Dash is important because of the points awarded for it. I got a good start but blew the 1st corner badly. Four guys went by but I was able to get Chad Cose right away and pulled in Sammy. With a lap to go I got underneath Sammy and finished 2nd behind Schnabel.

For the Main Event, after looking at some times from my Heat race, I knew my times were good. I needed a good start. I did not get the hole shot but was 3rd up over the jump. I ran into the back of JR Schnabel on the 3rd lap coming into turn 1 and about stepped off the bike and two guys got by me. I got back by the both of them and ran down JR again. I finally made a clean smooth pass on him but missed a shift and could not make it stick. A few laps later, with about 6 to go, I got a little bit more physical with JR and we both drifted up the track, but this time I made the pass stick. In the next left-hand corner JR came back with some force but I pinned it and we were stuck together until the next corner, when I got the position. I was after Jake with 5 laps to go. His gap was about 2.5 seconds and I closed it to about 0.5 seconds but could not make up the time quickly enough. Catching is one thing; passing is another. But I finished 2nd with a 1, 2 weekend—heading in the right direction. I really did want to be the first rider to win both days. That would be history. But it did not happen.

I want to thank my team once more for all they do. My 450 was working great on the TT—best I have felt there in a long time. My Mile bikes were really fast and also worked great. Can’t wait to get back out and win some more races.

A Special "Thank You" to all the flattrack fans that make all this happen...