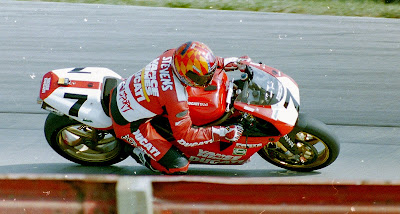 One of the all-time greats in AMA Superbike Championship Series racing history, Thomas Stevens, is profiled in this week's 'Archives' column by Larry Lawrence, over at Cycle News.com.  The '91 AMA Superbike Champion started out riding endurance racing in the WERA series, and took his first AMA Road Racing win in one of the most popular road racing series in America back in the late '80s.

Larry has a great look back on the history of AMA Road Racing and the stars who have made it what it is over the years, in this week's 'Archives' column, which you can find here.  Thanks LL and CN for this step back in time!