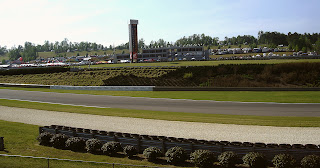 The Barber Motorsports Park paddock area is highlighted during the AMA Pro Road Racing round at the Leeds, AL. track during the Honda Superbike Classic in April of 2007.  One of, if not THE most beautiful tracks in the United States (and in the World by some pundits thoughts), the Barber facility not only houses one of the nicest race courses and paddocks on the schedule, but the most thourough motorsports museums anywhere to be found.

George Barber was a local man who made his fortune in the dairy business and invested heavily in vintage motorcycles (and cars) and then built a sprawling museum to house and display his collection.  The track has been on the AMA Pro Road Racing schedule for several years now, and at one point was even under consideration in the last several years to host a World Superbike Championship Series round (WSBK.)

AMA Pro Stars Join Fans for Barber Track Walk
in Support of Local Tornado Victims
DAYTONA BEACH, FL (June 15, 2011) - This Saturday evening, June 18, road race fans can get an inside look at what it takes to navigate the challenging 2.38-mile Barber Motorsports Park, thanks to those who know it best: AMA Pro racers. AMA Pro Racing, Barber Motorsports Park, and ZOOM Motorsports have teamed up on a special event that not only gives fans a rare opportunity, but also raises funds for those affected by the devastating tornadoes that hit Alabama and other areas of the South in late April.