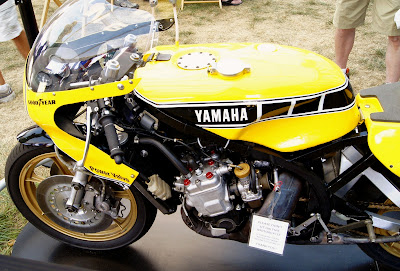 Kenny 'The King' Roberts' 1980 Yamaha YZR500 OW48 World Championship winning machine sits under the Yamaha tent during the 4th Annual RedBull Indianapolis MotoGP Weekend in August 2011.  Ridden by Roberts, Sr. to his 3rd of three 500CC World Championship Series titles during the 1980 season, the machine was tuned by former '69 250GP World Champion Kel Carruthers, who had worked hand-in-hand with The King for many years even before taking off across the pond to contest the European road racing series.  Roberts held off the onslaught of the Suzuki men in title rivals Randy Mamola, Marco Luchinelli and Franco Uncini in taking the three-peat in the championship that year.

Teamed with Venezulean rider Johnny Cecotto (winner of the '76 Daytona 200) on the factory yellow and black for the '80 season, the machine featured an aluminum frame and re-worked outer cylinders to route the exhaust towards the rear of the bike.  In spite of the constant changes on the machine throughout the race season, Roberts was still able to triumph in his quest to best the Europeans again.  Cecotto would finish the season ranked 7th behind a long line of RG500 Suzuki pilots including the aforementioned riders, and Valentino Rossi's father, Graziano Rossi, and Dutchman Wil Hartog.

This section of Yamaha's 50th Anniversary talks about The King and his year's in the AMA Grand National Championship Series, winning the title in '73-'74, and his move to the European scene in '78:

Here Yamaha talks about the graphics on their machines:

And The King's third (and final as a rider) 500CC World Championship winning season in 1980:

Roberts lost the '83 500CC World Championship by a mere two points to new Honda hire, Freddie Spencer, in a season that was fought tooth and nail until the final lap of the final race:

And Motorcyclist Magazine online talks about Yamaha's tribute to The King on their 50th Anniversary site here: