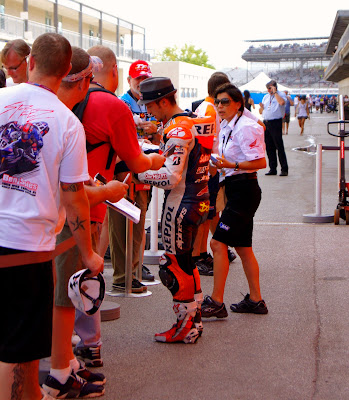 Andrea Dovizioso signs autographs for the fans outside the Repsol Honda garages at the RedBull Indianapolis MotoGP round of the 2011 MotoGP World Championship Series season on August 27. Dovi had just several minutes earlier qualified in the 6th spot on the grid at the 4th Annual Indy MotoGP round, just behind Marco Simoncelli on the San Carlo Gresini Honda. Dovi would go on to finish 5th at Indy, again behind Super Sic.

It was announced yesterday that Dovizioso had signed with Herve Poncharal's Monster Energy Tech 3 Yamaha team for the 2012 season, after also considering a seat on the LCR Honda MotoGP satellite team. Dovi will reportedly team along with Brit Cal Crutchlow on the team's new 1000, set to take the place of the 800-based YZR-M1 for the upcoming season.

With the world economy still in flux and having a major affect on motorsports sponsorships, it has been speculated all year that a shake-up on the Repsol Honda team would occur after the 2011 season, with rumors rampant that Andrea Dovizioso would be the odd-man out in order to make room for fellow Italian Simoncelli. The former '01 125 Grand Prix World Champion has had a strong run of solid results, to go along with his single MotoGP victory at Donington during the 2009 season, but was left without a slot on the Repsol Honda team when the world's largest manufacturer of motorcycles was forced to cut back their team for the upcoming 2012 season, along with Repsol's downsizing of the big MotoGP sponsorship allotment.

Here is the link to the current stats for riders in the 2011 MotoGP World Championship Series standings, which currently has Dovioso in 3rd place in the 2011 season standings, albeit only 1 point ahead of team mate Dani Pedrosa, who missed several rounds due to his broken collarbone earlier in the season. Pedrosa has since returned like a man on fire to score 2 race wins, 3 runner-up spots and a 3rd place to move him back into contention for the 3rd spot in the overall 2011 season standings, with three round remaining in the season:

You can also view Repsol Honda's race report from last weekend's event at the Motegi round of the 2011 MotoGP World Championship Series, which saw Dovi's team mates finish 1-3 on the podium (Pedrosa winning and Stoner fighting back from an off-track excursion to grab the last spot on the podium):

And Motorcycle-USA.com has this press release from Honda after the Motegi round last weekend: