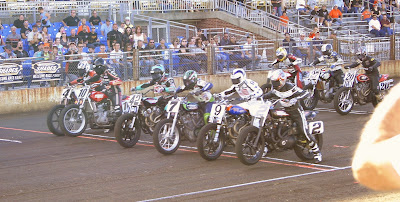 The green flag is thrown and the pin is pulled as 9 of the 18 riders in the National main event at the Springfield Mile II launch off the line in what will turn out to be a two-part dash for dominance in one of the oldest and longest running venues on the 2011 AMA Pro Flat Track Harley-Davidson Insurance Grand National Championship Series.  The two-time stop on the series' calendar has been running steadily since the early '80s after returning from a break that saw the series championship at one time being decided at the Illinois State Fairgrounds mile oval back in the mid '60s and before.

Within a blur, the drop of the green flag, the dumping of the clutch and the hammering on the throttle turns what looks like a gathering over the Labor Day Weekend into a wild 26 lap dash between 18 riders at the legendary facility on a sunny and windy Sunday afternoon.

Coming off the 2nd row has Jake Johnson on the #1 Zanotti Racing/Schaeffer's H-D/Boughner Racing/Motion Pro-sponsored XR750, with Rob Pearson on the #27 USC Racing/WKR/Hart Racing/Shoei-sponsored Kawasaki, and Matt Weidman on his #20 White's H-D/SNIP/Shoei/Silkolene-backed XR all following close behind.

In what would turn out to be the first of two starts on the day after a red flag caused by riders Smith and Pearson crashing out, seperately and unhurt, the field would be lined up for a final 5 lap dash to the end, with Willie McCoy ending the day as a first-time winner on the day after over 23 years of trying on the AMA Grand National Championship Series circuit.  McCoy would be followed home by Carr, Johnson, Coolbeth, Mees, Lewis, Halbert, Brad Baker, Weidman and Nichole Cheza rounding out the top 10, and seperated by only .979 seconds.  1st through 4th were only .112 seconds apart in the final dash to the checkers.

Heading to the series' and season finale at round 20's Pomona Half-Mile on Saturday, October 15 has three riders who have been battling at the front since the start of the season heading to the last race of the year seperated by only 8 points.  Defending AMA Grand National Champion Jake Johnson took his 3rd win of the season at last weekend's event at Calistoga to take the series points lead for the first time this season with 357 points.  Jared Mees, after wrestling the point lead from season-long leader Sammy Halbert after winning at Knoxville in early September, heads to the finale down 4 points with 353 markers and 5 wins on the year.  And Sammy Halbert, after leading the series standings for the first 16 events of the season, sits a very solid 3rd with 349 points and 4 wins on the year.  In what will surely be an epic battle of the masters of flat track, any of these three riders could still end up with the 2011 AMA Grand National Championship when the dust finally settles in the west at the Pomona Fairplex next Saturday.

If you've been following all season, there's no need to get off the train now, as The Rolling Thunder Show is getting ready to storm the left coast with a stellar line-up of racing, champions and championships, and no matter the outcome will surely leave everyone in attendance gasping for air! 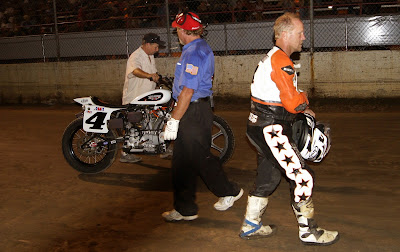 Chris Carr walks out to the starting line after rider intros at the Lake Odessa, MI. half-mile event on July 23 as team crew chief/tuner to the stars Kenny Tolbert rolls the #4 American Motorcyclist Assoc/Classic H-D/DFW Honda/Arai-sponsored H-D XR750 out beside him.  The two will be rolling out to the starting line of their last event together at the Pomona season finale next week, in what surely will be a bittersweet moment for them, and their long list of fans, including myself.  They will be chasing The Prince of Peoria's 79th win to cap off a grand legacy of racing in their many years together, and whether or not he does get that final win next week or the '08 Lucas Oil Indy Mile is remembered as his final event win, the man that has withstood the over-quarter century of professional motorcycle racing competition will still be remembered as the great competitor that he has been since his first pro race in 1985 and the man that at one time, was also the fastest man on two wheels in the world.

Brad Baker on the #12 Lloyd Brothers Motorsports/TeamHurtByAccident.com/Nicky Hayden/Foremost Insurance-sponsored Ducati 1098 leads Sammy Halbert on his #7 Kings Kustoms/White's H-D/LZ Racing/KK Supply-backed XR750 during heat race 1 at round 11 of the 2011 season at I-96 Speedway on July 23.  The Bullet would go on to win his heat over Slammin' Sammy to punch his ticket to the main and to the Dash for Cash events later in the evening, where he would finish 9th/4th respectively. 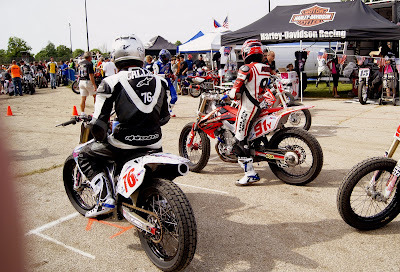 Mikey Martin on his #91Y Weirbach Racing/General Engineering/Barnett Clutches/Spectro-sponsored Honda CRF450R sits alongside title rival Gerit Callies on his #76L Full Throttle/Sioux Falls Truck & Trailer/Vortex/O'Neal-sponsored Honda before the final qualifying session at the Springfield Mile I round of the AMA Pro Flat Track Pro Singles Championship presented by Motorcycle-Superstore.com Series on May 30.

In the first lap dash to the stripe, the top seven competitors (after the 1st of 12 laps) in the AMA Pro Flat Track Pro Singles presented by Motorcycle-Superstore.com Championship Series put on a run that looks like something akin to a high speed conga line.  Hustling and bustling to get that last little bit out of the little 450 singles machines, the spring is wound tight in what has become a must-see event at each and every AMA Pro Flat Track Series racing event.  18 competitors on 18-like and closely matched machines go for it at over 135 mph on the straights and bang handlebars in the corners as they all shake and move for a position.

After 12 laps of riding closer to one another than what you be forced to sit in an airplane, round 16 of the AMA Pro Singles Championship found Jake Shoemaker on his #55A Scott Powersports-sponsored Honda CRF450R take the win over Zakk Palmer on his #81C Western Hills Honda, by just .002 seconds (and neither is in this shot early in the race!) at the Springfield Mile II event held on September 4.

Many of these same riders will be duking it out at Pomona next weekend for the final run to the championship battle in the AMA Pro Flat Track Pro Singles Series Championship, and those on-hand to witness what will surely go down to the stripe will see some of the wildest, fastest and finest racing that the undercard of an AMA Pro Flat Track Series event has to offer.  And by the way, that ticket you buy for the final at Pomona come next Saturday, will probably go unused, as most of the time you will be on your feet and cheering as battles like this round out what has been a stellar season of racing for the young Pro Singles riders.

Going for it as they head to the stripe for the first time in the Pro Singles main, Jake Cunningham leads the pack on his #94L Arai Helmets/Certainted Products/No Fear/Best Builders-sponsored Yamaha YZ450F over current Pro Singles Championship leader Mikey Martin on the #91Y Weirbach Racing/General Engineering/Barnes Clutches/Spectro-backed Honda CRF450R.  Close on their heels and making a wide inside move is Briar Bauman on the #10Z Rod Lake Racing/Browns Cycle/Lazer Racing/Gene & Gail Cummings-backed Honda, with Shayna Texter on her #25A RLT Racing/Lancaster H-D/Herr's/Invisible Glass-backed Honda tucked in low.


Pomona, CA. (Oct. 5, 2011) - On October 15th, when the Harley-Davidson Insurance AMA Pro Flat Track Finals get underway at the Fairplex in Pomona, Calif., it will mark the return of the famed Pomona Half-Mile.

With just one race remaining, this year’s championship will all come down to the AMA Pro Flat Track Finals and lies between three riders. A total of 29 points will be on the line and everything will boil down to this final race.

Currently leading the point chase by four points is reigning GNC champion Jake Johnson of Franklinville, N.J. Competing since 2002, Johnson captured the Grand National Singles crown in 2006 and 2008. An extremely consistent rider, Johnson, who has three wins to his credit this season, knows what it takes to win as is evidenced by winning at Calistoga last weekend on his Schaeffer's H-D/Zanotti Racing Harley-Davidson. Filled with determination and ready to go, Johnson is definitely looking to take the coveted crown for the second year in a row.

Sitting in second place, just four points behind, is No. 9, Jared Mees.  Competing on the Grand National trail since 2003, Mees hails from Honey Brook, Pa. Ending the season in third last year, Mees is determined to put the Number 1 plate on his Rogers Lake / Blue Springs Harley-Davidson. So far this year, he has taken five wins and is hoping to make the Pomona Half Mile number six.

Last, but definitely not least, is No. 7 Sammy Halbert of Graham, Wash. The 2009 GNC Champion, Halbert is in the fourth year of heading his own team. Sitting eight points out of the lead, he knows what he has to do to put his Kings Kustoms/LZ Racing/KK MC Supply Harley-Davidson in the Number One spot. With four wins to his credit so far this season, he will be giving it his all to get ahead of Johnson and Mees.

But these are only the top three. Right behind them is a full field of top riders who all want the honor of taking the victory at Pomona.

The AMA Pro Flat Track Finals will be Chris Carr’s last point’s race and he wants nothing more to go out in a blaze of glory. He has won at Pomona before and knows that he has to do to do it again. He took second at both the Sacramento Mile and the Springfield Mile. Now he wants a first at Pomona.

The action is going to be some of the best every seen in Southern California and this is a definitely a race not to be missed.

Event info for round 20 of the 2011 AMA Pro Flat Track Harley-Davidson Insurance Grand National Championship Series at the Pomona Fairplex:

Official website for the season finale round 20 of the 2011 AMA Pro Flat Track Harley-Davidson Insurance Grand National Championship Series presented by Motorcycle-Superstore.com at the Pomona Fairplex: