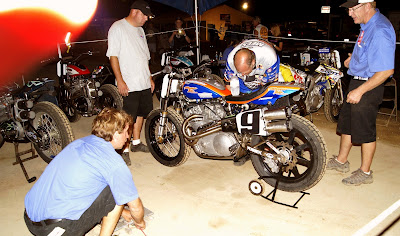 Under the watchful eye of several AMA Pro Flat Track officials, Brent Armbruster begins the tear down procedure at the end of the evening at round 11 of the 2011 AMA Pro Flat Track Harley-Davidson Insurance Grand National Championship Series in Lake Odessa, MI. on July 23.  Rider Jared Mees had just taken the National main event win at the I-96 Speedway Half-Mile by 1.661 seconds over runner-up Bryan Smith, 3rd place finisher Jake Johnson and 4th place finisher Sammy Halbert (all whose mounts can be seen in the background), and the laborious inspection task was ahead for the crew chief of the Rogers Lake Racing team.

Mees and his #9 Rogers Lake Racing/Blue Springs H-D/Screamin' Eagle/Lucas Oil-sponsored XR750 were in the middle of a run of wins, which by the end of the season would see him leading all other competitors for total on the season (5), allowing him to claim the 2011 AMA Grand National Twins Championship, adding to his '09 Twins Championship.  Mees also won events at Brainerd, Knoxville, Hartford and the Springfield Mile I round that started it all in late May.

With the 2011 season a wrap, Mees looks to defend his ICE Speedway Championship during the off-season and will be ready to go come mid-March '12 in Daytona, to make another run at the coveted AMA Grand National Championship.  If he gets on another roll next year like he did this season, the competition will have to step-up their game even more.


After the events that transpired at Calistoga, the race for the Championship became very tight , with only 8 points separating the three leaders. The only thing to do was to go to Pomona with a positive attitude. This was not a type of track in which I have been dominant in the past, but have done reasonably well on this kind of surface. Qualifying did not go well for me. I felt OK, but just did not have the times I wanted.

I was in the 3rd Heat with Kenny Coolbeth, Johnny Lewis, Brad Baker and Willie McCoy among several other good riders. I got the hole shot and Baker and I were dicing it up left and right. Baker started to get ahead of me a bit until he crashed. That caused a red flag and a restart. I got the jump on the restart and then started to dice it up with Kenny. He was coming up along side of me and then I would lead it for a straight away and then he would come back. I ended up winning the Heat but since there was a red flag in it, I did not get a time and was therefore third pick for position in the Dash and the Main Event.

We made a small gearing change for the Dash for Cash. I came off 4th, passed Matt Weidman and we started dicing it up. I was able to get ahead of him, ending 3rd in the Dash. Jake Johnson had checked out, riding really well.

For the Main Event we did not make any changes. I got a decent start but went too high for the first lap and a lot of riders went by me, pushing me back to 7th or 8th. Luke Gough went down, bringing out a red flag and a restart. I got a decent jump and went low, getting by a few people and was up to 5th. I was following Henry Wiles but he went down coming off turn 2. I just barely missed hitting him. We restarted with 5 laps to go, which was in my favor. I got a good jump and went to the bottom. I was mixing it up with Chris Carr, Robbie Pearson and Lewis. On the last lap I was on the bubble for finishing 2nd in the Combined Championship points. I got by Pearson and Carr on the last lap and was able to finish in 5th place. This was good enough for 2nd place in the Championship.

Jake Johnson won the race and the Championship in first class fashion. He rode a great race and, if I could not win it, I was glad that he did. He has been a long-time friend since we were little kids in the Amateur classes.

We had a lot of success on the Twins this year. Brent Armbruster did a great job with the bikes, always immaculately prepared, and much of my success was due to him. Steve Beattie was also of great help to our program, not only with his Suspension systems but with his friendship and counsel.

We now know our weak points and know what we need to work on for next year. I am already excited about 2012 and feel that if Daytona Bike Week were next week, I would be as excited, and more ready than ever. I am not looking forward to the down time in the off season…I want to get out there and compete.


I want to thank all of my Sponsors and Supporters, but especially to Rogers Lake Racing, Blue Springs Harley Davidson and Screamin’ Eagle for my Twins, to Montgomery Cycle Center for my Singles, as well as to Saddlemen, Lucas Oil, Digger Helm and Gene Cummings. Thank you for all your help in making my career possible.

I look forward to seeing everyone in Daytona 2012. Have a great winter and Happy Holidays to all.