Mikey Avila on the #33E SDI Insulation/M.E.H. Corp/Boughner Racing/Arai-sponsored Honda CRF450R adjusts his helmet prior to heading out for the first of two practice sessions at the Springfield Rodeo/Multipurpose Arena.  Avila would be the champ at the end of the day by just .290 seconds over season-ending champ, Mikey Martin, but Martin would end up winning the war at season's end.  Avila did win six events on the year (to Martin, Briar Bauman's and Gerit Callies three wins each), but his overall results came in just eight points shy of taking the title over Martin.  Avila would end the season with nine top 5s and nine podiums in the Pro Singles Championship, and looks to join Martin and Callies for the 2012 season in the Expert Grand National ranks.

Martin's #91Y Weirbach Racing Honda was virtually flawless all season, and for the most part his and the Iowa-based Weirbach Racing team seemed to only suffer two hiccups throughout the season that were, or could have been substantial.  Just before the previous day's events for the Springfield Mile I round, the team's transporter was partially destroyed by a fire in the parking lot of the hotel where they were staying.  When they showed up later that morning for the rain-delayed event, the team's bikes were discolored from the heat, smelled of heavy smoke and had to be patched together in order to even make it on the track.  Like strong teams do, and with the AMA Flat Track family helping out, they overcame the devastating losses incurred to come back and finish 2nd on the mile and the TT for the weekend.

That could have been the turning point that would have lost the championship to lesser teams and riders, but they endured and went on to take the lion's share of the payouts when the season wrapped.  At the penultimate round of the season, Martin's Honda blew up during the final, but fortunately for he and the Weirbach team, was able to re-start on his back-up machine since it happened before the five laps-in mark.  Martin came home in the 8th spot (his second-worst finish of the year after his 10th at Lima) in another instance of overcoming near-defeat on what ended up being his championship season.  Bravo to Mikey and the Weirbach team for getting it done! 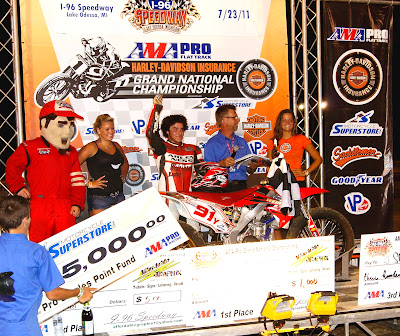 Mikey Martin gets introduced to the crowd after winning the I-96 Speedway Half-Mile round of the 2011 AMA Pro Motorcycle-Superstore.com Pro Singles main event at the Lake Odessa, MI. facility on July 23.  Martin had just taken his second win of the season (by just over four seconds to runner-up Conner Anderson) and took his third-in-a-row on the Sacramento Mile the next weekend.  Martin's win at the Lake Odessa round would vault him into the lead of the championship just past the half-way point of the season, a lead he would never surrender throughout the final nine rounds of the year.

The #91Y Weirbach Racing/General Engineering/Barnett Clutches/Spectro Oils-sponsored and Honda CRF450R-mounted rider had a stellar year in being only one of two men contesting the Pro Singles Series to qualify for all 20 events (runner-up Mikey Avila being the second man.)  Martin not only won three events on the season (Hagerstown being the other win for the California rider), but also scored eight podiums and 14 top-5s on the season in route to being the 3rd AMA Pro Singles Champion since the series' inception in 2009. 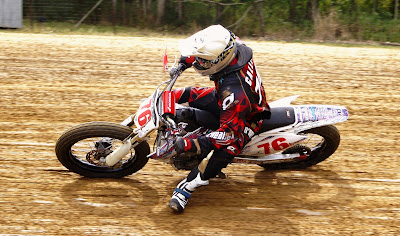 Gerit Callies is shown during practice for round 15 of the 2011 AMA Pro Motorcycle-Superstore.com Pro Singles Championship Series season at the Peoria TT on August 21.  Callies would end the day in the runner-up position after Mikey Avila was declared the winner due to Briar Bauman's DQ (see below.)

The #76L Twenty Six Suspension/G2 Ergonomics/Vortex Sprockets/O'Neal-backed Honda CRF450R-mounted rider would end the season as the 3rd ranked rider in the year's standings, after winning three rounds on the year (Daytona Short Track II, DuQuoin, Castle Rock) and would finish the season 25 points down on Martin and 17 down on Avila (316-308-291.) 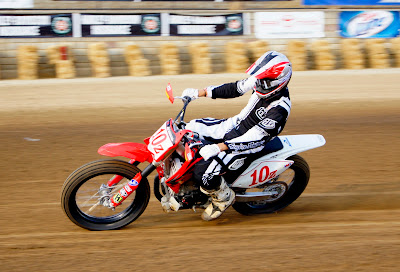 Briar Bauman all but spoiled the latter part of the 2011 Pro Singles Championship Series for the rest of the contenders.  Turning pro mid-season, the Salinas, CA. resident then burst onto the scene to take what would have been four wins on the year.  However, due to a fuel test that was bad after the Peoria TT, he was disqualifed and the win was given to Mikey Avila after all of the podium ceremonies had passed and the paying crowd had left the house.

Returning to action above on his #10Z Rod Lake Racing/Browns Cycle/Lazer Racing/Gene & Gail Cummings-sponsored Honda CRF450R, the 'rookie' and former AMA Horizon Award winner would go on to get that first win two weeks later at the Springfield Short Track on September 3 over William Cato and 3rd place finisher Callies.

Bauman went on to win the last two rounds of the season at Calistoga and Pomona, and put in an inspiring ride to second place behind first-time winner Shayna Texter at the Knoxville round, to finish the season ranked as the 6th place man in the Pro Singles Championship.  Contesting only eight rounds in the season, he wrapped the season with those three wins, two 2nd-place finishes and one 3rd-place finish at the Springfield Mile II round.  If you throw out his DQ from Peoria, his worst finish in seven rounds was a 4th place finish at the Sacramento Mile, his very first Pro event.

Rodney Rutherford was on-hand at the season-finale round of the 2011 AMA Pro Motorcycle-Superstore.com Pro Singles Championship at the Pomona Fairplex and filed this race report for Today's Cycle Coverage.com:

Thanks to AMA Pro Flat Track for this link to the complete results for round 20 of the 2011 AMA Pro Flat Track Harley-Davidson Grand National Championship presented by Motorcycle-Superstore.com Pro Singles Serie season-finale from the Pomona Half-Mile: