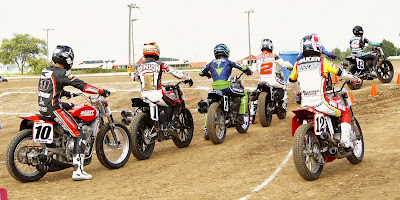 Seven of the top 10 contenders in the 2011 AMA Pro Flat Track Harley-Davidson Insurance Grand National Championship Series get ready to roll out for the final qualifying session of round 11 at the I-96 Speedway Half-Mile in Lake Odessa. MI. on July 23.  With the Rolling Thunder Show entering the second half of the season, the 5th event of the Twins Series season would again see Jared Mees (partially hidden in front of Brad Baker) top the night on his #9 Rogers Lake Racing/Blue Springs H-D/Lucas Oil/Saddlemen-sponsored XR750, winning his 3rd of 5 events on the season in route to a runner-up finish on the year.  Mees won the 2011 AMA Grand National Twins Series Championship based on his strong runs throughout the second half of the year.

Bryan Smith on his #42 Moroney's Fasthog.com/American H-D/Rockyonline.com/Boughner Racing-backed XR came home second at I-96, and would go on to win the Sacramento Mile one week later, and would end the season ranked in the 9th spot in the overall championship standings.  Smith likely would have finished higher in the season if not for missing four rounds in the Singles Series earlier in the season.

Defending AMA Grand National Champion Jake Johnson would fill out the 3rd step on the box at Lake Odessa, after bringing his #1 Zanotti Racing/Schaeffer's H-D/Boughner Racing/Arai-sponsored XR750 home with a glowing rear brake (which also never affected his results in any of the other half-mile events in which his porcelain rear disc would get hot enough to fry eggs.)  Johnson would win four events on the season, finishing the year out with season-ending wins at Calistoga and Pomona which would catalpult the long-time veteran to his 2nd consecutive AMA Grand National Championship.

AMA Pro Flat Track Saddlemen Rookie of the Year Brad Baker would take his #12 Lloyd Brothers Motorsports/TeamHurtByAccident.com/Foremost Insurance/ENI USA-sponsored Ducati 1098 to the 9th spot at Lake Odessa, winning his heat to qualify for the main.  The Bullet finished out the season in grand style at Pomona in coming home 2nd to winner Johnson, to cap off his 6th place finish on the season in the championship standings, and his best finish to date in an AMA Grand National Championship Series National main event.

Sammy Halbert rode his #7 Kings Kustoms/White's H-D/LZ Racing/KK Supply-backed XR to a strong 4th place finish at I-96, which at the time saw him still leading the overall standings in the points chase.  Slammin' Sammy would win four races on the year, but would eventually finish in the 3rd spot in the championship after also finishing 3rd at Pomona.  The Washington State resident will be back and ready to grab his first Grand National Championship in the 2012 season and will be stronger then ever.

3-Time AMA Grand National Twins Champion Kenny Coolbeth, Jr. would come home in the 8th spot at the Lake Odessa Half-Mile on the #2 Harley-Davidson Motor Co/Screamin' Eagle/Spectro Oils/Fox-backed factory H-D XR750, after winning the previous event at Hagerstown to go along with his early-season win at the DuQuoin Indoor Short Track.  The King of Cool would end the season in the 4th spot in the overall championship standings, and vows to step-up his and his team's off-season testing in order to make it four men going for the championship for the 2012 season.

Former AMA SuperMoto Champ Johnny Lewis would have an off-night by his standards at I-96 on the #10 Scott Powersports/Dubach Racing Developments/Saddlemen/Triple J Racing-backed Kawasaki 650R-based mount, in finishing in the unlucky 13th spot.  But JL10 had a great, all-around season and made some major strides on the Kawasaki, finishing 2nd for his best-ever Grand National main finish at Hagerstown, and would then finish the season in the 4th spot at Pomona behind Johnson, Baker and Halbert.  Leading his first-ever laps at the Springfield Mile II, the Pennsylvania resident now knows what it's like at the front of a Rolling Thunder Show freight train, and will surely improve in 2012 on his 7th place finish in the overall standings from this season.

More great video to help close-out the season can be seen below, thanks to the great efforts of Will Fulford and Yve Assad of The Fast and Dirty.com.  They help us close out the season in grand style with their Pomona wrap-up video.

A tip of the helmet goes out to Will & Yve again for this fantastic video from The Fast and Dirty.com of the season-finale at round 20 of the 2011 AMA Pro Flat Track Harley-Davidson Insurance Grand National Championship Series at the Pomona Half-Mile.  Thanks guys, great stuff as always!