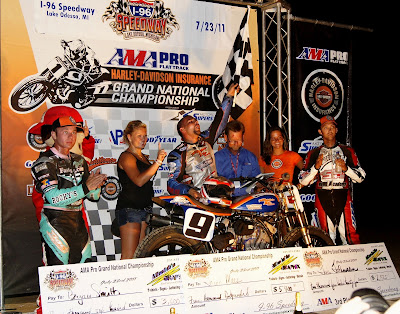 Jared Mees hoists the checkers and whoops it up after winning round 11 of the 2011 AMA Pro Flat Track Harley-Davidson Insurance Grand National Championship Series presented by Motorcycle-Superstore.com at the I-96 Speedway in Lake Odessa, MI. on July 23.  Mees had just taken his third National main event win of the season on his #9 Rogers Lake Racing/Blue Springs H-D/Lucas Oil/Saddlemen-sponsored XR750 over runner-up Bryan Smith on his #42 Moroney's Fasthog.com-backed XR and 3rd place finisher Jake Johnson on the #1 Zanotti Racing/Schaeffer's H-D-sponsored XR by a margin of 1.661 seconds over Flyin' Bryan and 1.826 seconds over Jersey Jake after the 25-lap main event.

Mees went on to win five events (so far) on the season (Springfield Mile I, Hartford, Knoxville, Brainerd) and briefly had taken the overall points lead in the series from season-long leader Sammy Halbert after his fourth win at Knoxville in mid-September.  After round 19 at the Calistoga Half-Mile, Johnson took the lead in the standings heading into the last round of the season coming up in less then 48 hours at the Pomona Half-Mile.  As things stand now, Johnson holds the lead in the series by 4 points over Mees (357-353 points), with Slammin' Sammy now sitting in the 3rd spot another 4 points behind Mees (349 points.)

With the season finale ready to decide the overall championship in the 2011 AMA Pro Flat Track Harley-Davidson Insurance Grand National Championship Series presented by Motorcycle-Superstore.com coming down to the final wire, there are any number of scenarios that exist in which each of the three remaining men could triumph with the crown.  Mees, with 5 wins on the season, Johnson with 3, and Sammy with 4, will one of these men take the Dash win AND the National main event win to claim the 2011 AMA Grand National Championship?

Thanks as always goes out to Will Fulford and Yve Assad for putting together their catalog of super videos over the course of the last few years in AMA Pro Flat Track.  You WILL NOT find a better product for the sport out there, plain and simple, nor will you find two people more passionate about the sport then Will & Yve.

Today's video review is brought to you by Blue Springs Harley-Davidson, one of '09 AMA Grand National Twins Series Champion Jared Mees' main sponsors.  Thanks to Blue-Springs H-D for putting this together along with the folks from The Fast and Dirty.com as The Jammer goes about winning his 5th National main event of the year at round 18 of the 2011 AMA Pro Flat Track Harley-Davidson Insurance Grand National Championship Series presented by Motorcycle-Superstore.com at the Brainerd Half-Mile event: