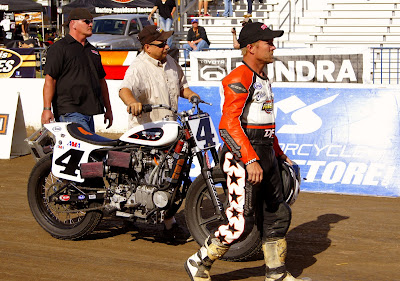 For the final time in his career as a legendary rider, 7-Time AMA Grand National Champion Chris Carr walks out towards rider intros at another track that made him famous.  A 12-time winner on the Springfield Mile, The Prince of Peoria came up just-short of his 13th on September 4 in round 16 of the 2011 AMA Pro Flat Track Harley-Davidson Insurance Grand National Championship Series.  How short?  Just .012 seconds short, to first-time winner Willie McCoy.  Leading the majority of laps throughout the red flag-delayed 26-lap National main event, Carr was one of the first to greet winner McCoy on the victory podium, giving his former team mate a bear hug for the ages, and commenting that if he had to lose to somebody that he was 'glad it was Willie.'

With his long-time tuner, Kenny Tolbert rolling out his #4 American Motorcyclist Assoc/Classic Harley-Davidson/DFW Honda/Arai-backed H-D XR750, Carr's 50th and final main event at the Illinois State Fairgrounds was just like the almost 400 races the man has run throughout his AMA Flat Track career--fast and exciting, leaving fans and friends alike on the edge of their seats and the tips of their toes as the former champ showed the way at the front and battled side-by-side with his fellow competitors. 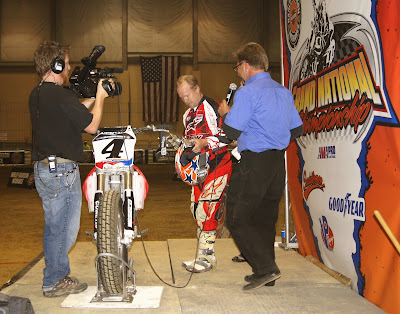 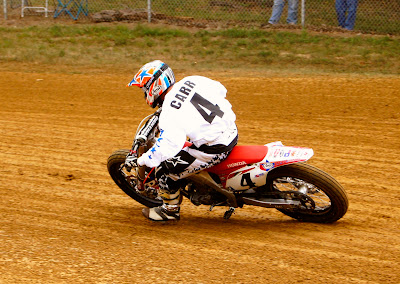 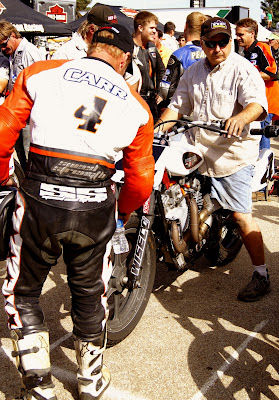 These two men hold records in AMA Grand National Championship Series racing that put them second only behind former 9-Time AMA Grand National Champion Scott Parker.  Chris Carr and Kenny Tolbert have been racing together for 23 years, and have produced together all of Carr's championships, and a majority of his 78 National main event wins in the series.  Looking to the future, the duo are hoping to get the sponsorship together to put a young up-and-coming rider on their equipment for the 2012 season and beyond.
At the Springfield Mile II event when this picture was taken, Carr told Cycle News.com's Larry Lawrence and myself that they 'weren't there yet' in being able to get a full-season program together, but were hopeful to be able to get things worked out to be able to do so.  With the tutelage of this great pair of racers and people, whomever that person may end up being will have a rock-solid program under them when it comes to fruition.  And they'll have a great time hanging with two of the nicest guys in the sport as well.

Carr has some ideas he is hoping to jointly work with the AMA and some other entities in order to help AMA Flat Track grow even more and prosper in the future, and he talks more about that with Cycle World.com's Matthew Miles below.

Read and view on below more about Chris' great final season in competition, and his last race event a the Pomona Half-Mile.

Paul Carruthers was on-hand at last Saturday's season-finale round 20 of the 2011 AMA Pro Flat Track Harley-Davidson Insurance Grand National Championship Series at the Pomona Half-Mile, and got a chance to talk with Chris about his season and his great career over the course of the last quarter-plus century.  You can read it hear, and also see the short video clip with Chris as he reflects on calling it a day, in the latest edition of Cycle News.com's Digital issue:

Paul also talks about covering Chris' racing over the years, starting with his first win at the Peoria TT back in '86:

Moto Syndicate put up this super video of Chris' last ride at the Pomona Half-Mile over on YouTube.  This is a must see!

And Matthew Miles also talked with the 7-Time AMA Grand National Champion and put up this interview with Chris on CycleWorld.com: