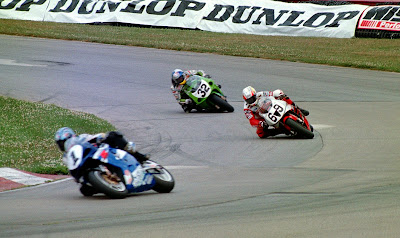 Mat Mladin on his #1 American Suzuki/Yoshimura/Dunlop/Motorex-sponsored GSX-R750 leads early race two action in the Wiseco 100 AMA Superbike Championship Series round at the Mid Ohio Sports Car Course in Lexington, OH. in July 2001.  Mladin would go on to win his 3rd of three-straight AMA Superbike Championships, and would retire at the end of the '09 AMA Pro Road Racing season after winning his record 7th championship.  Eventual event winner Nicky Hayden keeps the reigning champ honest on the #69 American Honda/Universal Studios/Dunlop/Jardine-backed RC51, while Eric Bostrom looks to close the gap on the #32 Kawasaki/Lockhart Phillips/Akrapovic/Yuasa-sponsored factory Kawasaki ZX-7R.


Hayden would go on to win the '02 AMA Superbike Championship while riding the American Honda RC51, and then would bolt to the MotoGP World Championship for the '03 season while riding for the Repsol Honda team, claiming the MotoGP Rookie of the Year in the process.  By the end of the 2006 season, America had seen it's first world champion in six seasons (Kenny Roberts, Jr./2000 500CC World Champion) when The Kentucky Kid claimed the championship at the season ending round on the team's RC211V, defeating multi-time World Champion Valentino Rossi in route to the title.

Five years later, and with 150 grand prix races in his back pocket after nine seasons of contesting the premier road racing series in the world, and the landscape has changed some for the Owensboro resident.  Now riding for his second factory team in MotoGP, the Ducati pilot has struggled mightily in the series with the Italian marque's carbon fiber chassis, yet he still should finish ranked 8th in the season-ending standings after next weekend's final round in Valencia.  Should any problems befall 7-Time MotoGP Champion Valentino Rossi next weekend (Hayden's team mate), The Kid could actually finish ranked in the 7th spot of the season-ending standings.

Although finishing 7th or 8th is not the cup of Kentucky tea that Hayden would hope for, the former champ stands resolute in helping to bring the Italian marque back to the top in MotoGP, and is looking forward to the switch to the '1000' platform in the 2012 season after five years of running the '800s' in the series.  Hayden's contract is up with Ducati at the end of the 2012 season and the question on a lot of minds is 'will he be on a red Italian bike after the 2012 season?'  Time will tell.

Read on about Nicky's nine seasons in the MotoGP World Championship as Cycle News.com's Henny Ray Abrams was on-hand at the Australian MotoGP round a couple of weeks ago, when Hayden competed in his 150th Grand Prix event since joining the series for the 2003 season.  You can read his story and interview with The Kentucky Kid here: