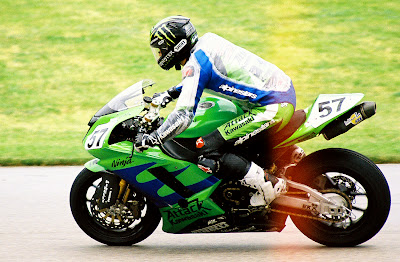 Chaz Davies bends the #57 Attack Performance/Kawasaki-sponsored ZX-6R through the turn 11 section at Road America during one of the practice sessions for the AMA Formula Xtreme Series round of the AMA Pro Road Racing Series in June 2008.  Davies would later qualify in the 6th spot for the Formula Xtreme Series with a time of 2:21.605 and an average of 103.229 mph at the four mile course in Elkhart Lake, WI.  Davies would finish in the same spot in the Formula Xtreme final, 4.563 seconds behind event winner Aaron Gobert on a Rockwall Honda.

The Brit born and bred rider headed over to the World Supersport Championship Series in late '09 after the end of the AMA Pro Road Racing Series, which he had contested for the Aprilia team in the AMA Pro Daytona SportBike Series Championship.  Contesting three races for the ParkinGO team on their Triumph 675-based mounts, Chaz returned in the 2010 season to end up fourth in the overall standings. while riding the 3-cylinder machines.

Switching to Yamaha's potent YZF-R6 for the 2011 season, the team took possession of Team Yamaha's 2009 World Supersport Championship-winning machines early in the season, and proved that the machines were still up to the task, winning five rounds on the year to date.  Cal Crutchlow had previously taken the machines to the '09 Championship while under the Yamaha factory tent.

Team ParkinGO Yamaha rider Chaz Davies won the 2011 World Supersport Championship last weekend at the Magny Cours round of the series' season.  Thanks to WorldSBK.com for this short story about Chaz' great championship wrap-up with just one round remaining on the season:

Chaz Davies talks about wrapping up the 2011 World Supersport Championship for his ParkinGO Yamaha team after just over three years running in the series:

And you can check out more of Chaz here in some of Stu's Shots archives articles: