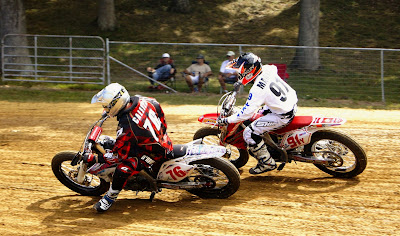 Gerit Callies on the #76L Twenty Six Suspension/G2 Ergonomics/Vortex Sprockets/O'Neal-sponsored Honda CRF450R works the low line during practice for round 14 of the 2011 Motorcycle-Superstore.com AMA Pro Singles Grand National Championship Series at the Peoria TT on August 21.  Series points leader Mikey Martin on his #91Y Weirbach Racing Honda holds true to his line while the duo sprints out of turn 5 in the run to the stripe at the home of the Peoria Motorcycle Club.

Callies would go on to out-qualify Martin, 26.214 to 26.348 for 2nd and 3rd qualifying spots behind fast qualifier Briar Bauman at 26.093 seconds, and would take 2nd in the Pro Singles main event behind declared winner Mikey Avila, after Briar Bauman was disqualified for a fuel test oversight.  Martin would finish the day in the 5th spot.  The two contenders for the 2011 AMA Pro Flat Track Pro Singles Championship both have three wins on the year.

With the final battle to the championship to be decided at the Pomona round this Saturday, the run to the end should surely be exciting, just as the year behind us has been. 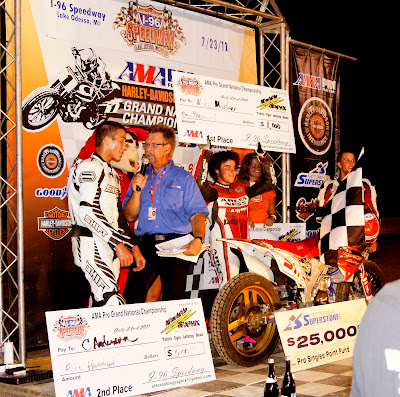 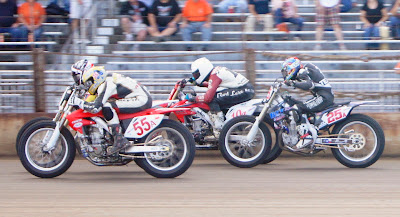 With two laps to go in round 16 action of the 2011 Motorcycle-Superstore.com AMA Pro Singles Grand National Championship Series event at the Springfield Mile II in early September, Jake Shoemaker on his #55A Scott Powersports/REV-IT/Roy Miller Engines/Penske Suspension-sponsored Honda CRF450R makes an outside move on Zakk Palmer (partially hidden) on the #81C Western Hills Honda/Rick Soucie/TLC Racing/Angie Beighle-sponsored Honda, which he would duplicate at the checkers to take the win for the day.  Hot on their heels are eventual 3rd place finisher Briar Bauman on his #10Z Honda, and eventual 4th place finisher Shayna Texter on her #25A RLT Racing/Lancaster H-D/Herr's/Invisible Glass-sponsored Honda.  Palmer crossed the stripe just .002 seconds behind winner Shoemaker, with Bauman another .008 back and Texter just .016 seconds behind Bauman. 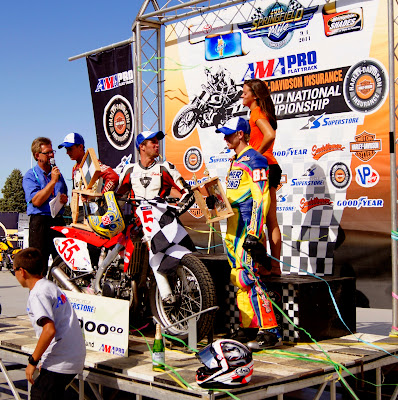 Third place finisher Briar Bauman is interviewed on the podium at the Springfield Mile II on September 4, while winner Jake Shoemaker and runner-up Zakk Palmer discuss their day with Miss AMA Pro Flat Track, Jenn Lewis.  Round 16 of the 2011 Motorcycle-Superstore.com AMA Pro Singles Grand National Championship Series saw the three finish within .010 seconds of one another after the 12 lap Pro Singles main event. 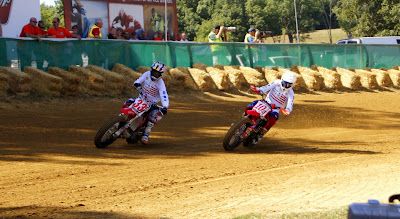 Mikey Avila on the #33E SDI Insulation/MEH Corp/Boughner Racing/Arai-sponsored Honda CRF450R leads Briar Bauman on the #10Z Rod Lake Racing/Browns Cycles/Lazer Racing/Gene & Gail Cummings-sponsored Honda during the AMA Pro Flat Track Motorcycle-Superstore.com Pro Singles main event at the Peoria TT on August 21, 2011.  Bauman got the best of Avila on the track, but was DQed after a bad fuel test, relegating Avila to the top spot for the day, and his 5th win (of 6 total) of the season.  Avila leads the series in wins going into the last round of the season at the Pomona Fairplex on Saturday, October 15, but sits in the 2nd spot in the championship, 14 points behind series points leader Mikey Martin, 303-289 points.


MEDFORD, Ore. (October 12, 2011) - On Saturday, October 15, the Motorcycle-Superstore.com AMA Pro Singles Grand National Flat Track season will come to a dramatic close at the Pomona Half-Mile in Southern California. The AMA Pro Singles Grand National Champion is yet to be determined, and with a points fund of $25,000 up for grabs, riders will be laying it all on the line in this intense final battle. The race will be followed by the AMA Pro Racing Flat Track Banquet on Sunday, which will celebrate the closing of another wild season of Flat Track action.

With the point standings in each of the three flat track classes almost neck and neck, spectators can count on incredible racing this Saturday. In the Motorcycle-Superstore.com Pro Singles class, three riders are poised to potentially take the title this season. Michael Martin currently leads the pack, with a total of 303 points, but both Michael Avila and Gerit Callies are close enough to win it all with 289 and 288 points, respectively. The rider who finishes the Pomona Half-Mile race in first place will be awarded 23 points. So, with a little luck, Avila and Callies still have a solid shot at the title. Fans will have the opportunity to get a behind-the-scenes look at the bikes and meet the riders prior to the action, as pits will be open between 5:15 p.m. and 6:15 p.m. With everything on the line in this final round of racing, this weekend’s event will be one for the record books.

The season finale banquet will be held on Sunday, October 16, at the Radisson Suites Hotel in Covina, California, where the $25,000 Motorcycle-Superstore.com Pro Singles Point Fund will be awarded to the top six riders in the Motorcycle-Superstore.com AMA Pro Singles class. The rider who finishes at the top of the points standings will be presented with a $10,000 check; second place receives $5,000; third place gets $4,000; fourth place is awarded $3,000; fifth place earns $2,000; and the sixth place rider receives a $1,000 check.