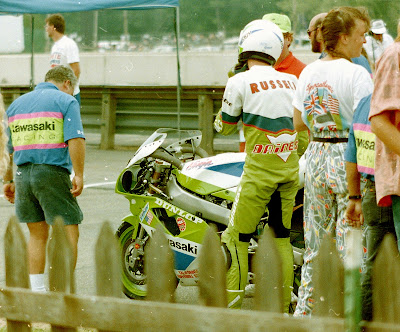 Scott Russell loosens the strap on his AGV helmet after pulling into the victory lane area at the Mid Ohio Sports Car Course after having won the AMA/Championship Cup Series 750 Supersport Series event in August 1991.  Team owner Rob Muzzy can be seen looking over the front end of the bike as crew chief Gary Medley is also seen just to Russell's right (sunglasses and beard.)  Russell had just taken his #1 Muzzy Kawasaki/Dunlop/SBS/California Superbike School-sponsored ZX-7R to the victory over team mate Jacques Guenette in the 14 lap, 34 mile final as part of the Camel Super Cycle Weekend at the Lexington, OH. facility.

On the way to two of his three AMA 750 Supersport Championships, the future Mr. Daytona would win all nine events of the season on his Muzzy Kawasaki, a feat that has yet to be equaled (and may never be.)  And it wasn't like Russell was cherry picking in the 750SS ranks.  Past, present and other future champions in the sport like Sam McDonald, Britt Turkington, Jason Pridmore, Tripp Nobles and a handful of others also contested the series, making it a great event to watch as the level of racing was top notch and on the edge.

Russell would go on to race the AMA Superbike Championship Series event the next day, finishing fourth behind winner Thomas Stevens, runner-up Miguel Duhamel, and third place finisher Tom Kipp.  Russell would go on to win the first superbike race of his career during the '92 season, catapulting him to the '92 AMA Superbike Championship in the process.

But it was during Russell's years in the AMA/Championship Cup Series Supersport races that the Georgia resident gained his legs to go on to be not only an AMA Champion, but a World Champion as well.  During the course of the 1990 season during his first 750SS championship run, Russell would win three events, and was on the podium in every race.  He also won two 600 Supersport races on the year and would finish the '90 season as the series' runner-up in the AMA/Championship Cup 600 Supersport Series.

Another in a long line of superb year's gone by in racing reviews, brought to us by Larry Lawrence and Cycle News.com's Archives column, comes to us this week as LL reviews 3-Time AMA 750 Supersport Champion Scott Russell's perfect season in winning his 2nd of 3 straight championships in the AMA Pro Road Racing 750SS undercard during the '91 season.  LL talks about Mr. Daytona-before he WAS Mr. Daytona-going a perfect 9 for 9 during the '91 AMA/Championship Cup Series 750 Supersport Series season.