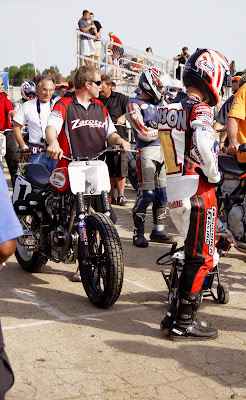 While Zanotti Racing team crew chief Ted McDermitt holds the reigns of the #1 Zanotti Racing/Schaeffer's H-D/Boughner Racing/Motion Pro-sponsored XR750, defending AMA Grand National Champion Jake Johnson looks out towards the track in preparation for round 6 of the 2011 AMA Pro Flat Track Harley-Davidson Insurance Grand National Championship Series at the Springfield Mile I in late May.  Johnson would go on to finish 3rd on the day behind first-time Springfield winner Jared Mees and runner-up Sammy Halbert, after finishing 2nd in his heat to rookie Brad Baker, and 4th in the Dash for Cash event.  Just over Johnson's shoulder is 5-Time Australian Flat Track Champion Luke Gough, the pilot of the #62 Digger/Dick Ford/Eaken Racing-sponsored Kawasaki.

Johnson won his first AMA Grand National Championship at the 2010 season finale at the Prescott, AZ. mile event, after having been in the hunt all season with former 2000 AMA Grand National Champion, Joe Kopp.  When Kopp's season started to fall apart around the time of the Lucas Oil Indy Mile at the end of August, Johnson was in the prime spot to take the championship lead away from Smokin' Joe should the situation arise.  Arise it did several weeks later, when the chain came off of the Lloyd Brothers Motorsports Ducati at the Canterbury Park, MN. round, and Johnson was there to pounce and take the championship points lead.  He wrapped it up a couple of weeks later with a convincing season-finale win at the Yavapai Downs Mile event, to take his very first overall AMA Grand National Championship, to add to his '06 and '08 Singles Series Championships.

Johnson's scenario this year is eerily similar to what transpired at the end of the season last year.  Hanging solid in the overall point standings in the 2nd or 3rd spot since the 3rd round of the season at DuQuoin in mid-April, Jersey Jake had taken two wins on the year up until last weekend's round at Calistoga (Salinas and Springfield TTs), where he finally got the Twins Series win monkey off of his back for the '11 season.  Johnson is only the third rider to lead the overall standings this season, as title contender Sammy Halbert had lead the overall through 16 rounds.  After round 17 in Knoxville several weeks back, Jared Mees took over the top spot based on his 5th win of the year at the Sprint Car Racing Capital of the World, and held the spot until crashing out of the Calistoga round and effectively being eliminated after his bike wasn't able to make the re-start (but was allowed to re-start while AMA Pro Flat Track officials sorted out the scoring snafus.)

Thanks to Dave Hoenig and Cycle News.com's Digital Edition for this great report on round 19 of the 2011 AMA Pro Flat Track Harley-Davidson Insurance Grand National Championship Series presented by Motorcycle-Superstore.com at the Calistoga Speedway Half-Mile:

And thanks also go out to Checkered Flag Photos for this album of pics from Calistoga: