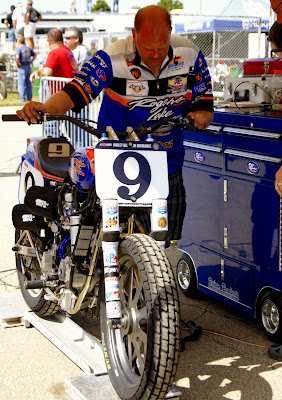 Crew chief and head tech, Brent Armbruster rolls the #9 Rogers Lake Racing/Blue Springs H-D/Screamin' Eagle/Lucas Oil-sponsored H-D XR750 of rider Jared Mees through the AMA Pro Flat Track tech line, minutes after The Jammer had won heat 2 at the Springfield Mile II on September 4, round 16 of the 2011 AMA Pro Flat Track Harley-Davidson Insurance Grand National Championship Series.  Mees and the Rogers Lake Racing team later went on to win the Dash for Cash event and brought the sparkling blue & burnt orange XR home in the 5th spot during the National main for the day after what was a two-part 21- and 5-lap dash to the checkered flag after a short red flag delay in the program.  Mees finished the Springfield Mile II round just .261 seconds behind event and first-time winner Willie McCoy on the hot and windy Illinois State Fairgrounds mile oval.

Heading to the Knoxville Raceway for the next weekend's event, round 17 of the series' season, Mees duplicated his wins in heat 2 and the Dash for Cash event, and then went on to win what is being called the closest-ever finish in an AMA Grand National Championship Series event over title rival Jake Johnson by just .0004 seconds in a virtual dead heat checkered flag finish.  It was Mees' fourth win of the season, and he would grab the overall points standing lead over season-long leader Sammy Halbert for his efforts.

Thanks to Jared Mees, Blue Springs H-D and Will & Yve from The Fast and Dirty.com for this excellent wrap-up video from the Knoxville Half-Mile, round 17 of the 2011 AMA Pro Flat Track Harley-Davidson Insurance Grand National Championship Series:

You can also check out more on Jammin' Jared Mees via his official website here:

Blue Springs Harley-Davidson is one of Jared Mees' main sponsors in the AMA Pro Flat Track Grand National Championship Series, and you can check out their race pages here as they post info on Jared's season:

And whatever you do, check out Will Fulford & Yve Assad's official website, The Fast and Dirty.com for ALL of their excellent photos and videos straight from The Rolling Thunder Show of AMA Pro Flat Track Series racing.

Also, a big congratulations go out to Will & Yve who will be tying the knot over the off-season in Macon, GA.

This great couple is going to make it 'official' (or legal, whichever you prefer!) during the break between the end of the 2011 season and the beginning of the 2012 season which fires up at Daytona on March 15, 2012: