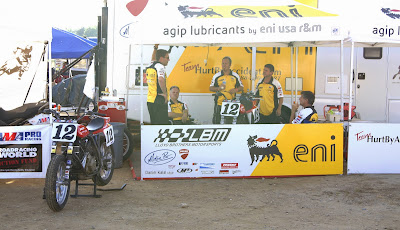 The Lloyd Brothers Motorsports Ducati team has a pep rally under the team's awning in between the on-track action at round 11 of the 2011 AMA Pro Flat Track Harley-Davidson Insurance Grand National Championship Series at the I-96 Speedway in Lake Odessa, MI.  Team hot-shoe and Saddlemen Rookie of the Year Brad Baker is off doing his obligatory appearances just before the opening ceremonies for the July 23 half-mile event.

While one of the team's #12 LBM/TeamHurtByAccident.com/Nicky Hayden/Foremost Insurance-sponsored Ducati 1098s sits on display, the rest of the team rallys around the primary bike after getting all of their necessary set-up checked out on the team's laptop.  Sandwiching the team in this shot are team co-owners Dave Lloyd (far left) and Mike Lloyd (far right) with team crew chief Dave Gamble just to Dave's left, Ronnie Thomason and former AMA Grand National competitor and #23, Kevin Atherton.

One of the more cohesive teams in The Rolling Thunder Show that is AMA Pro Flat Track Grand National Championship Series racing, the team has been around in AMA Flat Track for close to two decades now, and in the last three seasons has made some major strides with their Ducati program.  In comparison, it took Harley-Davidson, Yamaha, Honda and some of the other manufacturers years to get their maiden win (some fans of AMA Flat Track forget that the venerable XR750 was a labor of love in the early '70s before going to the alloy design), while the LBM team got their first win (and first with the Ducati) at the Arizona Mile I in Prescott Valley in May 2010 with '00 AMA Grand National Champion Joe Kopp.  All without any type of factory support from Ducati!

With rider Kopp hanging up his steel shoe after the 2010 season, the veteran team was forced to look for a replacement rider (not that replacing a rider of Kopp's ability and stature is any easy task.)  Just shy of three months before the first Twins Series event of the season at the Springfield Mile I, Dave Lloyd contacted us here at Stu's Shots and informed us they had signed '09 AMA Pro Flat Track Pro Singles Champion Brad Baker to take over the reigns of the mighty Duc.  Baker also announced it on the podium after his first Expert podium when he placed 3rd at the Daytona Short Track II event.

Although in his 'rookie' season as an Expert rider, Baker and the LBM team had a very successful season, book-ended with two very thrilling top-5 finishes at their first race together at Springfield (5th place, after setting fast time in his first 'official' Expert Twins event) , and their last in the '11 season at Pomona where Brad 'The Bullet' Baker took the big 1098 home in the 2nd spot, behind winner and 2010/2011 AMA Grand National Champion Jake Johnson.  Baker ended the season ranked as the Saddlemen Rookie of the Year while finishing in the 6th overall spot in the championship.

The team also took on the project of raffling off the '09 Buell that was used as the AMA Pro Road Racing pace bike during the 2009 season.  Working with AMA Pro Racing, Dave and Mike took possession of the Buell and transported it to the 11 Twins events for the 2011 season (the Lucas Oil Indy Mile round was canceled in August due to the rigging collapse just weeks before the event at the Indiana State Fair.)

Showing the bike and selling the tickets for the raffle during the Twins Series events this season, the team sold over 500 tickets and was able to collect a good chunk of change that will go towards the Air Fence Fund for AMA Pro Flat Track.  The raffle was held at the season finale in Pomona and Eddie Relick from Bloomington, IN. won the grand prize Buell for his ticket purchase.

A big tip of the hat and helmet goes out to the LBM team for their efforts for not only the season, but for going the extra mile in holding the raffle throughout the year to help promote more air barriers and higher safety levels at all AMA Pro Flat Track events.  Bravo guys, please take a bow as you deserve it!

And another tip of the helmet goes to the over 500 tickets that were sold to fans, sponsors, team owners and officials who purchased tickets throughout the year.

Five hundred and seventy-five tickets of $20 each were sold throughout the racing season at AMA Pro Racing Flat Track events with the culmination of a drawing for prizes of a brand new helmet donated by Arai Helmets and a 2009 Buell Ulysses XB12XP that was used as the official Pace Motorcycle during the 2009 AMA Pro Road Racing season. The Buell, which has less than 210 original miles, was donated by AMA Pro Racing. 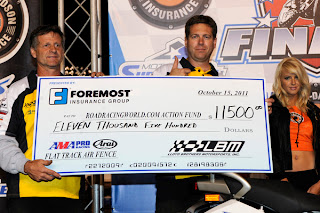 
“We would like to extend our thanks to Roadracing World Action Fund, Foremost Insurance, AMA Pro Racing, Arai Helmets and especially everyone at the Flat Track races from competitors to fans and family members that purchased the tickets to make this fundraiser a success.” added team co-owner Michael Lloyd.

To get a better understanding or what soft barriers do and why they are so important, go to http://www.youtube.com/watch?v=Cd6UMGnIktE .

A website has also been set up (http://www.lloydbrothersmotorsports.net/tickets.htm) with a list of all of the names of those who generously purchased tickets in support of soft barriers.

For more information about AMA Pro Racing, go to www.amaproracing.com/ft/ .

To learn more about soft barriers or to donate directly to the Roadracing World Action Fund visit http://actionfund.roadracingworld.com.