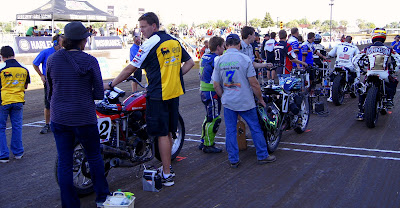 Just as the red flag at the Springfield Mile II above at round 16 of the 2011 AMA Pro Flat Track Harley-Davidson Insurance Grand National Championship Series presented by Motorcycle-Superstore.com on September 4 stirred the pot, the two red flags at the season-finale at Pomona on October 15 caused and created some interesting last-minute strategies for the competitors for what was the final 5-lap dash to the end of the year and the championship.  And just as last year's season-ending round came to a close, the 2011 season also did with the same man in charge holding that coveted #1 plate.


Jake Johnson and his #1 Zanotti Racing/Schaeffer's H-D/Boughner Racing/Motion Pro-sponsored XR750 was that man, and for the second year in a row had added his name to a list of greats, and a very short list of repeat-greats in the AMA Grand National Championship hunt.  Johnson finished the year by winning the season's final two rounds and by doing what champions do in being in the position to pounce when it is necessary.

And pounce he did, as Jersey Jake only led the standings for the final two events of the year, but they were the one's that counted in a season that saw him end the year with four victories and amassing 14 top 5 and 13 top 3 finishes.   Scoring 15 points or more in 16 of the 20 rounds held during the 20 race season, Johnson held his own and kept himself in the hunt all year to add another championship to his mantle.  In outdistancing the field-twice-at Pomona, The Champ got great restarts to distance himself from the rest to win at Pomona, after earlier taking the Dash win.  At the end of the night, Johnson was The Champ again in what was a similar ending to his previous year.   Great job Champ, and congrats!

Jared Mees had what by any other level of success an excellent year as well, leading the series in wins with 5, and also clinching the 2011 AMA Grand National Twins Championship (to add to his '09 GN Twins Championship), but came up short by 16 points to Johnson (386-370) in his quest to win the overall championship.  The rider of the #9 Rogers Lake Racing/Blue Springs H-D/Screamin' Eagle/Lucas Oil-sponsored XR wowwed those on-hand all year in fighting for wins and podiums, and has got to be the most congenial runner-up the sport has ever seen.

Stating in this week's Cycle News.com, Mees said he had 'nothing to be bummed about' and if the championship couldn't have been won by him he would have rather seen his friend and competitor claim it.  Mees was seen in some photos on the internet at the victory celebration after placing 5th on the night at Pomona clapping for his buddy Jake.  Now that's a class act!  Take a bow Jammer, your day will come!  This man's enthusiasm alone will see him wearing the #1 in the future.

The rider of the #7 Kings Kustoms/White's H-D/LZ Racing/KK Supply-backed XR750 started the year off with a double dose of bang in winning the season-opening rounds at Daytona back in March.  And through 16 of the 20 rounds on the schedule this year, he also held the overall lead in the championship while winning the 2011 AMA Pro Flat Track Grand National Singles Championship along the way.

Slammin' Sammy may have lost the overall championship in finishing in the 3rd spot (369 points), after a great run to 3rd at Pomona, but he showed everyone on-hand in winning four events for the year that he has what it takes to finally win the Grand National Championship.  It may not have happened this year, but it shouldn't be too far down the road before we see the Washington State resident accomplish that goal.  The 23 year old is full of steam and once he gets all the pieces together in his program, his train will be hard to stop!

Kenny Coolbeth, Jr. finished the season in the 4th spot of the championship (309 points) and won two races on the year, but had what would be considered an off-night for this former 3-Time AMA Grand National Twins Champion at Pomona in coming home 9th.  The King of Cool started the year off with a new Chaplin Kawasaki to ride in the Singles Series, winning the third race of the year at DuQuoin, and then backing it up by taking his #2 Harley-Davidson Motor Co/Screamin' Eagle/Spectro Oils/Fox-backed factory H-D XR750 to the win at the Hagerstown Half-Mile in early July.

Also winning the final two Dash for Cash events of the year at Calistoga and Pomona, the only man still backed by a factory team in AMA Grand National Championship Series racing still has it to take the big wins.  Although his off-night at Pomona was the result of transmission troubles on his factory XR, Coolbeth told Cycle News.com that he and the team would have to step-up their game in testing in order to keep the front three closer in the future.  If that's the case, everyone better look out for the East Coast resident in the 2012 season.

The future of AMA Flat Track racing is young, bright and ready to get to the front, and if his ride on the #12 Lloyd Brothers Motorsports/TeamHurtByAccident.com/Nicky Hayden/Foremost Insurance-sponsored Ducati 1098 at the season-finale at Pomona is any indication, Rookie of the Year Brad Baker is a short time away from grabbing some major gusto in the series.  The Bullet had a great learning year on the Big Duc, with the help of team co-owners Dave Lloyd (shown holding the #12 machine above during the red flag delay and talking with The Fast and Dirty.com's Yve Assad), Mike Lloyd and team coach/traveling companion and former Grand National competitor and #23, Kevin Atherton (also above with back to shot, far left.)  And don't forget crew chief Dave Gamble and the rest of the LBM squad, who are among some of the hardest-working and highest-profile teams on the circuit.

The '09 AMA Pro Flat Track Pro Singles Champion (and 2010 runner-up) rode the wheels off everything he threw a leg over this year (and especially riding the LBM Ducati for his first time) and took a season-ending best finish of 2nd at Pomona to close out his rookie season as an Expert.  Crashing out unhurt in his heat 3, Baker started off the back row and came back for a 3rd to qualify for the main at Pomona, and was the only viable rider that was able to help keep defending and repeating champion Jake Johnson in sight during the night's racing.  Baker finished the season in the 6th spot (234 points) and will surely be a major threat next year for the title.  Right on Brad!

And before closing this look at the season, how can you go without mentioning retiring 7-Time AMA Grand National Champion Chris Carr (who can be seen in the background of the shot over Sammy Halbert's shoulder.)  Carr brought his #4 American Motorcyclist Assoc/Classic H-D/DFW Honda/Arai-sponsored XR home in the 7th spot at Pomona, to close a quarter century of racing in the AMA Grand National Championship Series with 5th place in the overall standings (243 points.)  The Prince of Peoria busted his butt and his ba..s all year (as evidenced by his several podium finishes, his 2nd place at the Springfield Mile II behind former team mate Willie McCoy, and by the several hits alone he took at the Springfield TT.)

Although The Champ wasn't able to add to his last race win at the '08 Lucas Oil Indy Mile, he more than added to it in stature and poise and showmanship, something the man has always done at each and every event he shows up to.  Carr will be missed on the track, but with any sponsorship luck for the 2012 season, will be around off the track.

Keep an eye on Stu's Shots in the next few days as we talk more about the close of the career of one of the all-time greats in the sport.

Cycle News.com showed AMA Pro Flat Track the love this week in putting 2010 and 2011 AMA Grand National Champion Jake Johnson on the cover, fresh off his fourth win of the season at the Pomona Half-Mile event, having just wrapped up his 2nd consecutive AMA Grand National Championship at the season-finale's round 20 (great shot of Jake on the track in front of the grandstands at Pomona, taken by The Fast and Dirty.com's very own Yve Assad:

Paul Carruthers, Editor at the new Cycle News.com's Digital Edition, was on-hand at the Pomona Fairplex for round 20 of the 2011 AMA Pro Flat Track Harley-Davidson Insurance Grand National Championship Series presented by Motorcycle-Superstore.com and filed this report on the season's final round:


The West Coast's own Poppa Wheelie was on-site at Pomona over the weekend and filed these two great (and more to come, I'm sure!) photo albums of shots of the #1 and #2 men in the 2011 AMA Grand National Championship:

Motorcycle-USA.com's Bryan Harley was also on the scene at Pomona and filed this story (with more photos) of the season-finale at Pomona:

Today's Cycle Coverage.com had this report of the last race of the season that was filed by Rodney Rutherford:

Harley-Davidson Motor Company filed this press release on Kenny Coolbeth ending up 9th in the season-finale and Jake Johnson clinching the championship:

Dave Hoenig, the official photographer for AMA Pro Flat Track, also runs his excellent photo site, Flat Trak Fotos.com, and has the results and (soon to be posted) photos from round 20 at Pomona here:

And Dirt Illustrated.com had Dennis Cox on-hand at Pomona to file these pics from the final event of the 2011 AMA Pro Flat Track Harley-Davidson Insurance Grand National Championship Series presented by Motorcycle-Superstore.com: