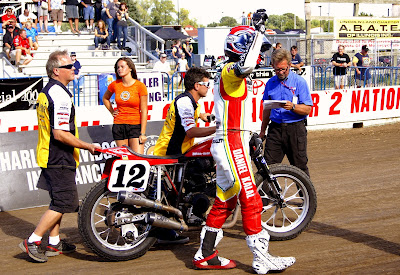 Round 16 of the 2011 AMA Pro Flat Track Harley-Davidson Insurance Grand National Championship Series at the iconic Illinois State Fairgrounds mile oval saw the usual packed house on-hand to witness the oldest form of motorcycle racing in the United States, as the 18-rider National main event went 25 laps and down to the wire to deliver it's usual form of  stand-up, gasp and go 'wow' action to the thrills of those in the stands.

Baker, in his first full year as an Expert class rider, piloted the #12 Lloyd Brothers Motorsports/TeamHurtByAccident.com/Nicky Hayden/Foremost Insurance-sponsored Ducati 1098 HyperMotard-based machine to the 8th spot in the National, after winning semi race #2 over Shaun Rusell to punch his ticket to the main event.  After winning the '09 AMA Pro Flat Track Pro Singles Championship in the first full season of it's existence, The Bullet backed it up with a runner-up in the '10 Pro Singles Championship behind Jeffrey Carver, Jr.

Moving ahead to the 2011 AMA Pro Flat Track Harley-Davidson Insurance Grand National Championship Series, and Brad has moved on and up to the Expert class, running his Singles Series program on Honda machinery out of his and his brother Scott's team, Baker Boys Racing.  Right off the bat in the early going of the season The Bullet showed he was meant to run with The Bigs, as he garnered his first Expert class podium in round 2 at the Daytona doubleheader round.  But even bigger, Baker announced on the podium that night that he would be joining the Lloyd Brothers Motorsports Ducati team for the Twins Series events for the 2011 season.

Just over 2 1/2 months later, Baker and the LBM team hit the track at the Springfield Mile I round for the series' first Twins event of the year, and out of the box, after very little off-season testing on the Big Duc, the Washington State resident set fast time among the 57 riders that timed in on that Sunday in late May, and also by almost .5 seconds faster than 2nd fastest qualifier and long-time series veteran Willie McCoy.

Fighting an ill-handling wobble on the straights at Springfield, Baker still took home the fastest heat win of the day to put it into the show, and went on to bring the LBM Ducati home in the 5th spot after 25 long, grueling laps, and only 2.914 seconds back from event-winner Jared Mees.  Not too bad for his first 'official' Expert Twins Series ride, let alone on an ill-handling machine!  (Note--AMA Pro Flat Track began a 'provisional process' during the 2010 season to allow up-and-coming Pro Singles riders a chance to mix it up with The Bigs before actually moving up to the Expert class.  Although Brad had used his maximum of three races last year to get a feel for the big Twins class bikes, those results were not official in terms of points earned, thusly his first 'official' Expert Twins Series event at the Springfield Mile I.)

Fast forward to the Springfield Mile II event as shown above, and the LBM team and The Bullet have managed to work out the wobble that frustrated them all some three months earlier, albeit with a speed reduction to the machine in the process, thusly causing the team to race their way out of the semi into the National main over the Labor Day Weekend event.  And although their finishing position wasn't quite as good in that event--8th place--they did finish just .801 seconds back of first-time winner Willie McCoy, after a red flag delay that bunched the field up for a 5-lap dash to the end.  Baker again showed how tough those Northwest Country logging boys are during the re-start, shrugging off a 'slight' scratch to his eye suffered when dirt got through his Arai shield and blurred his vision from the first 21 lap stint.

Brad and the team have faced adversity throughout the Twins Series this year, missing the Hagerstown round due to a faulty throttle position sensor, and losing a motor at the Sacramento Mile in late July.  They also failed to qualify for the show at Knoxville, which altogether caused him to drop to 6th in the overall series point standings, which he is all but assured of going into the season finale at the Pomona Half-Mile on October 15.  With some help from '02 AMA Superbike Champion and '06 MotoGP World Champion Nicky Hayden, the team was able to rebuild their motor and they debuted that along with their newest sponsor at Springfield (as noted above on the tank of the LBM Ducati.)


Baker immediately made his presence known in timed qualifying by setting the fastest lap at 24.493 seconds – 73.490 mile per hour average around the tacky half-mile oval. Baker remained on top of the time charts throughout both qualifying sessions to claim the pole position for heat number one.


“Qualifying first tonight is a big boost for the team. This is the third time this year that Brad has been fastest in timed qualifying. We struggled in our last two races in Knoxville, IA. and Brainerd, MN. so setting fast time is a big boost for the team. We are looking forward to finishing the night as strong as we have started” stated team lead tech David Gamble.


Baker continued to run up front as he earned a direct transfer to the main event from his heat race, finishing third behind championship contender Sammy Halbert and Matt Weidman. 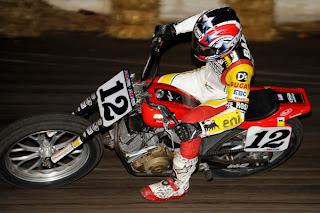 On lap six of the main event, Baker found himself in 8th place fighting for position in a tight pack of riders. He methodically made his way past riders Johnny Lewis, Matt Weidman and multi-time national champion, Kenny Coolbeth.  At the checkered flag Baker was in the 5th spot ,only inches behind Australian National Champion, Luke Gough.

“We’ve made a lot of progress tonight, so I am really happy” said Baker after the main event. “The track had a lot of grip and it was really fun to ride. I have had some really good, solid finishes on the Ducati so far and I am really looking forward to Pomona, CA. in two weeks. I really think that I can make the last race our first win.”

“I really want to thank the promoter, Bob Belino and his crew. They have brought us back to California for three races this year. The first two were sellout crowds with really enthusiastic fans. I can’t wait to go to Pomona, CA in two weeks for our last race of the season. Brad and the Ducati really like the deep, loose dirt tracks so with anyluck it should be a good track for us to finish what I feel has been a really successful season” added team co-owner David Lloyd.

And you can keep up with Brad and his brother Scott here via their official website, Baker Boys Racing.com: