Is KTM Considering a Run at the WSBK Championship Series? 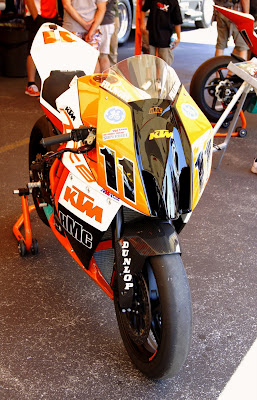 Fillmore would go on to card two top 10 finishes during the weekend at the Honda Super Cycle Weekend presented by Dunlop Tire-sponsored event at the Lexington, OH. track, in what was a great show for it's first time out in AMA Pro Road Racing competition.  In it's first race outing it finished just 13.620 seconds behind winner Young in 7th, and in race 2 finishing 9th some 26 seconds behind winner Tommy Hayden on another Yoshimura Suzuki.


Ultimate Motorcycling.com reports that KTM is seriously considering a run at the WSBK Championship Series in the near future.  Read on:

And Crash.net also reports about KTM's hinting at getting into the WSBK Championship Series, possibly as early as the 2012 season:

Thanks to Ultimate Motorcycling.com for this link to the specs for KTM's RC8R twin-cylinder machine, along with some great pics of the machine:

RoadRacingWorld.com has this press release from last month when KTM won the 2011 IDM International German Superbike Championship, with Martin Bauer winning the title while riding the Austrian company's RC8R superbike: