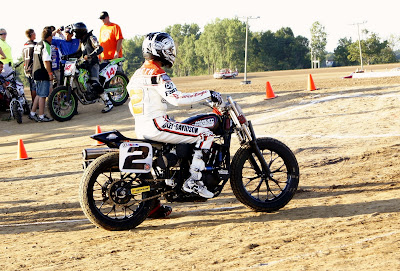 3-Time AMA Grand National Twins Champion Kenny Coolbeth, Jr. looks over the track at the I-96 Speedway round at Lake Odessa, MI. in July before he rolls out for his heat race at round 11 of the 2011 AMA Pro Flat Track Harley-Davidson Insurance Grand National Championship Series.  The King of Cool had an unusually rough outing at the half-mile event after placing fourth in his heat behind winner Brad Baker, Sammy Halbert and Henry Wiles.  He would go on to post an 8th place finish in Lake Odessa's National main event, and would come home 7.324 seconds behind I-96 winner Jared Mees after the 25-lap main event.

The long-time veteran in the series, who also holds the '07 AMA Grand National Singles Series Championship among his career credits, took his fourth Dash event win of the year on his #2 Harley-Davidson Motor Co/Screamin' Eagle/Spectro Oils/Fox-sponsored factory H-D XR750 last weekend at round 19 at the Calistoga Speedway Half-Mile.  His other Dash event wins this year came at DuQuoin (where he also won his first of two races on the year), Hagerstown (where he won the National main for his second win of the 2011 season) and the previous event weekend to Calistoga, at the Brainerd Half-Mile.

And you can check out some of the other recent press releases about Kenny and the H-D Motor Company right here: