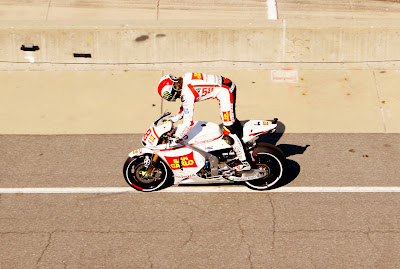 Marco Simoncelli is shown heading back onto the track at the 4th Annual RedBull Indianapolis MotoGP round during the free practice 3 session of the weekend.  The #58 San Carlo Honda Gresini rider does some stretching on his RC212V on the pit out section before re-entering the track in route to a 4th place time in the session, .763 seconds behind Repsol Honda's Casey Stoner.  Simoncelli would go on to qualify 7th, but would finish the race the next day in the 12th position after suffering tire issues with his Bridgestone tires in the intense heat suffered in Indy over the weekend's events.


With regret and sadness we must report the tragic death of the former 250cc World Champion, who was fatally injured in a crash during the opening laps of the Shell Advance Malaysian Grand Prix round of the MotoGP World Championship earlier today.  Simoncelli crashed and was struck on the track while contesting round 17 of the 2011 season championship.

You can read all of the offical press releases from Honda, Bridgestone and other teams from the MotoGP World Championship here thanks to RoadRacingWorld.com:

And Cycle News.com's Henny Ray Abrams filed this story of the death of Marco Simoncelli at the Malaysian circuit earlier today: