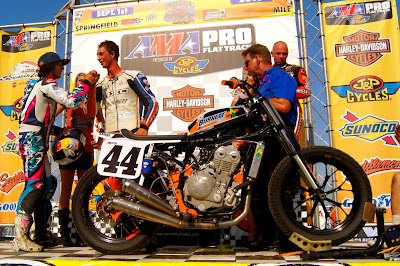 Brandon Robinson made a pass on his TJ Burnett Farms/USC/James Hart Racing Kawasaki team mate JD Beach on the 6th lap of the 25-lap National main today at the Springfield Mile I and the rest, literally was history as the personable young man from Oxford, PA. went on to run away from the field and make his mark at the Illinois State Fairgrounds-hosted event.

Robinson on the #44 TJ Burnett Farms Kawasaki made a clean sweep of the day in the process from the start by taking fast time in qualifying, running away in his heat in what looked like could have been a good battle with Kenny Coolbeth, Jr. on the #2 Harley factory XR before clearing out and winning by just over .6 second, winning the Dash for Cash and then winning the main by just over 5.2 seconds.

Bryan Smith, on the #42 Crosley Radio/Howerton Motorsports Kawasaki suffered an unknown mechanical in his heat race which forced him to come back and win his semi, started the main from the outside of row three, fighting his way through the pack to the front before running with 3rd-place finisher JD Beach on the #95 Burnett Kawi, 4th-place finisher Willie McCoy on the #59 H-D of Wausau XR and 5th-place finisher Brad Baker on the #12 Dodge Brothers Racing XR750.

To give you an idea of how tight the battle for 2nd through 7th-place was, Robinson's victory of 5.299 seconds over Smith, with Beach in 3rd-place another .237 seconds back, making it a Kawasaki sweep of a mile National, which I believe is a first for AMA Grand National Championship racing.  McCoy, in 4th was .004 seconds in arrears to Beach, Baker another .287 seconds back in 5th, Coolbeth just .014 seconds behind overall points leader Baker and last week's winner Jared Mees on the #9 Rogers Racing XR in 7th-place another .166 seconds back.  That's a spread of just .608 seconds from 2nd to 7th-place which translated to a barn burner of a battle just behind winner BRob44.

Robinson's win makes it his second of the season, after winning round 2 in mid-March at the Daytona Short Track II, and was his fifth podium of the year and sixth top-5 of the season as well.  In the last three weeks and events, he has finished 2nd at Indy and last week's 3rd-place in Virginia for a great streak heading into the last three rounds of the season.

Baker still holds the overall points lead with by 17 points over now Smith, who leap frogged Henry Wiles after Wiles' 9th-place finish on the #17 Lloyd Brothers Motorsports Ducati (170-153-149).   Robinson moved up to 4th in the championship in a tie with Mees but holds the tie breaker in wins for the season (142 points.)

Retirees in today's race included Johnny Lewis who borrowed an XR750 after the new motor in his Latus Triumph went south early in the day and made less then one lap before coasting to a stop on the front straight, Steve Bonsey on the #80 Zanotti Racing XR with an unreported mechanical, Rob Pearson on the Weirbach Racing XR whose motor went up in smoke on the 13th lap of the main, Jake Johnson on the other LBM Ducati with an unknown mechanical that dropped him out of the battle for the 2nd-8th places early in the race when coming out of four he went high, threw his arm up and came down with plenty of room to spare to coast to a stop just out of sight in turn one.  Mikey Martin on the Bonneville Triumph also only made 18 laps in the main.

A big congrats to the TJ Burnett Farms Kawasaki team for their 1st and 3rd-place finishes today at the Springfield Mile I by totally dominating the day at the rain delayed round.

In the podium shot above while AMA Pro Flat Track official announcer Barry Boone talks to the crowd, team mates Beach and Robinson share the TJ Burnett Farms love after their dominating afternoon at Springfield, while 2nd-place finisher Smith cools off awaiting the podium ceremonies to begin.

Tomorrow's events get rolling again at 11:15 EDT/10:15 CDT with first practice as another full day of racing is on-tap at the mecca of flat track that is the Springfield Mile II in round 11 of the 2013 AMA Pro Flat Track presented by J&P Cycles Grand National Championship.

You can check out the full results of today's great day at Springfield here, and you can also check out my traveling companion Larry Lawrence's article at Cycle News here for a round up of today's action.


SPRINGFIELD, Ill. (August 31, 2013) - On a scorching Saturday afternoon at the Illinois State Fairgrounds, Brandon Robinson (TJ Burnett Farms/Kawasaki) turned blazing and consistent lap times at the Springfield Mile to come away with his second career AMA Pro Flat Track presented by J&P Cycles victory. The heat seemed to have no effect on the young star whatsoever as he cruised to a 5.299 second win over Bryan Smith (Crosley Radio/Kawasaki) in the first 25-lap main event of the Labor Day weekend doubleheader. 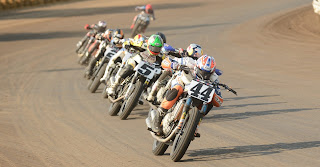 Brandon Robinson on the #44 TJ Burnett Farms Kawasaki took over the lead from team mate JD Beach on the 6th lap of the 25-lap National main today at the Springfield Mile I and went on to run away with the victory in his second win of the season and fifth top-5 this year.  AMA Pro Flat Track photo by Dave Hoenig.
"Everything came together early on and I was just able to go with it," said Robinson. "My team was phenomenal all week putting this bike together and I'm positive I wouldn't be standing here today if it wasn't for them. My parents weren't able to make it to Daytona when I got my first win but they're here today and I'm thrilled to get this win in front of them. I hope I can do it all over again tomorrow and complete the double."
Robinson put on a fantastic display of speed all day, dominating his heat as well as the all-important Dash for Cash. Despite starting from pole position, it initially appeared that the main event wouldn't come as easily for the 23-year-old as a lightning-quick JD Beach (TJ Burnett Farms/Kawasaki) bolted from the starting line to take the holeshot. Beach led a wild pack for the first five laps before a surging Robinson was able to make his move. Once in command of the race, Robinson never looked back, pulling away and building on his lead lap after lap until he took the checkers. Saturday's win marked his third consecutive podium finish in Grand National Expert competition.
With Robinson's uncontested victory all but wrapped up long before the main event was over, the best race on track was the battle for second. Starting from the third row on his backup motorcycle, Bryan Smith earned a hard-fought second-place finish after running as low as 12 early in the race. The Flint, Mich. product fought his way to the front of the pack vying for the two remaining podium positions just after halfway.
Beach edged out Willie McCoy (Harley-Davidson of Wausau/Harley-Davidson), last year's Springfield Mile winner, by a mere, 004 seconds to close out the podium. The GEICO Motorcycle AMA Pro Road Racing star has recently rekindled his liking for dirt, earning an impressive four top-five finishes in his last five AMA Pro Flat Track races.
McCoy and Kenny Coolbeth Jr. (Harley-Davidson Motor Co./Harley-Davidson) rounded out the top five following a tight scramble on the final backstretch with defending Grand National Champion Jared Mees (Rogers Racing/Harley-Davidson). Unfortunately for Mees, he was the odd man out and was forced to settle with a sixth-place finish.
With just three rounds remaining on the 2013 calendar, Smith now sits just 17 points behind series points leader Brad Baker (Dodge Bros Racing/Harley-Davidson) in the overall Grand National Championship point standings, 170-153.
AMA Pro Basic Twins
Shayna Texter (Crosley Radio/Kawasaki) put on a clinic in her dominating AMA Pro Basic Twins victory at the Springfield Mile in the inaugural main event for the new class. The 22-year-old female sensation took the lead on the backstretch in the very first lap and seemed to increase her lead by a full second during each of the main event's 12 laps, eventually finishing 11.452 seconds ahead of nearest competitor Jason Isennock (Highs Dairy Stores/Kawasaki). Equally impressive, Texter's best laptime of 35.847 seconds topped the fast laptime of 36.024 turned by Brad Baker in the day's Expert main event.
"I can't thank Racing Unlimited enough for supplying me with the motorcycle today," said Texter. "I was fast right off the bat. I've always dreamed of winning the Springfield Mile and it just feels amazing to get a win here today. There was a lot of controversy as to whether or not I could ride the twin and hopefully I was able to prove some people wrong today. I also want to thank my entire team and everyone that made this happen for me today." In the Basic Twins debut, Texter not only silenced any remaining critics who pinned her as a rider only capable of succeeding in AMA Pro J&P Cycles Pro Singles competition, but the Williow Street, Pa. product exceeded the expectations of the large number of supporters even in her corner. Texter's dominating performance likely ranks as one of the biggest wins of her young and promising career and it seems like it's just a matter of time before she makes the permanent jump to the elite Grand National Championship Expert ranks.
Starting from pole position, Isennock got off to nightmare of a start, falling all the way back to seventh in the running order before the first lap was completed. Isennock showed tremendous resilience, however, as he battled his way back up the field to finish in second. Last weekend's Colonial Downs victor Cody Johncox (Sunnyside Cycle/Harley-Davidson) was able to maneuver through traffic and finish third. Michael Strable (Bill Built/Kawasaki) and Eric Stump (Bob Rausch Fuel Oil/Harley-Davidson) rounded out the top five, respectively.
Next Up
AMA Pro Flat Track presented by J&P Cycles returns to the Illinois State Fairgrounds tomorrow, Sunday, September 1st, for the second running of the Springfield Mile. The event will complete what has already been an incredible Labor Day weekend filled with action-packed racing. For tickets and more information regarding tomorrow's event, please visit http://www.illinoismda.com/ or call 217-753-8866.
How to Catch the Action

AMA Pro Racing will be live streaming multiple channels of in-depth and behind-the-scenes multimedia content from this weekend's event on the AMA Pro Live streaming video website. AMA Pro Live puts fans in the director's chair, allowing them to choose from a variety of viewpoints alongside Live Timing & Scoring data and play-by-play commentary via AMA Pro Flat Track's official Twitter feed. Log on and tune in at http://www.amaprolive.com/ft/.