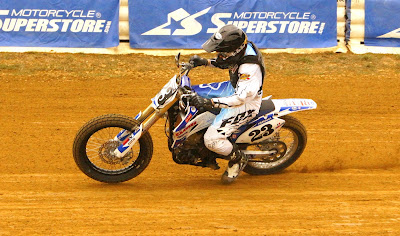 The 2010 AMA Pro Flat Track Pro Singles Champion, rode a Mack Daddy Racing/Kiesow Racing Honda CRF450R (another Illinois resident in owner and tuner extraordinaire George Mack) to take his cherry-breaking win as an Expert-ranked rider out of the 24 riders that turned out for the annual Mt. St. Helens Motorcycle Club-hosted event.

The popular rider out of Alton, IL. ruled in the National main to lead all 25-laps, set fast time in winning his heat race and also pulled off a solid 2nd-place finish in the Dash for Cash behind Washington State resident and series points leader Brad Baker.

In the shot above, Carver can be seen during the final qualifying session at the Peoria TT in August 2012 aboard his #23 Carver's BBQ/Kiesow Racing Yamaha YZ450F.

In what was an off-night for several of the top-ranked riders in the championship, the race did see defending AMA Grand National Champion Jared Mees fall off during the Dash and injure his shoulder, only to return and bring it home in the 2nd-place spot in the National, in another tough-as-nails run for The Jammer.

Salinas, California's own Steve Bonsey, in his first ride for the Zanotti Racing team in Grand National competition (Bonsey has ridden several west coast events for the Zanotti crew the last few years and has won several races in the Gene Romero series during the off-season of AMA Grand National racing while riding for them), rounded out the podium.

2-Time AMA Grand National Singles Champion Henry Wiles took the 4th-place position with series points leader Baker rounding out the top-5 at his home state event.  Sammy Halbert, the defending race winner, had an unusually off-night for what has been historically a very strong event for him, and finished in the 8th-place spot.

Others of note include Bryan Smith finishing in the 6th-place position and vaulting him into the 2nd-place spot in the overall standings, coupled with TJ Burnett Farms Kawasaki rider Brandon Robinson missing the National.  Baker's brother Scott finished in 7th, with Kenny Coolbeth, Jr. and Mikey Martin rounding out the top-10.

The series heads to Peoria for the annual Thunder Valley romp in west-central Illinois next Sunday with Baker growing his lead in the championship standings to 27 points over Smith (111-84), Hammerin' Hank now 2 points back from Flyin' Bryan, BRob44 now in the 4th-place slot with 82 points and Mees working his way into 5th-place overall with 74 points.

You can check out the full results from Castle Rock here, and Larry Lawrence filed this race report for Cycle News late last night.

Check out the full press release below from AMA Pro Flat Track as we take the time to congratulate Jeffrey Carver, Jr. and the Mack Daddy Racing and Kiesow Racing team for their great efforts last night in Castle Rock, great to see JC23 get his first and with such a super group of folks behind him.  The Kiesow team has worked really hard to get him into the mix the last couple of seasons, and George Mack from MDR has sponsored many-a-rider over the years including Matt Weidman, Ion Stear, Tyler Porter and Steve Bonsey just to name a few and it's great to see him reap the well-deserved rewards for all of his efforts in promoting and sponsoring riders in The Rolling Thunder Show and getting a big win along with JC23.  Great job and bravo to all!


CASTLE ROCK, Wash. (August 4, 2013) - It was a night Godfrey, Illinois native Jeffrey Carver Jr. (Mack Daddy Racing/Honda CRF450R) will never forget as he clinched his first ever victory at the Grand National Expert level under the lights at Castle Rock Race Park in Castle Rock, Wash. for Round 6 of AMA Pro Flat Track presented by J&P Cycles. Carver strategically maneuvered his 450cc machine around the TT style layout that consisted of a challenging jump and many turns.
"I'm feeling awesome right about now," said an ecstatic Carver. "To come out here and get my first national is just an unbelievable achievement for me, my team and my family. Those are really the people I need to thank the most. I wouldn't be nearly the rider that I am without my team backing me. I have to thank my parents for getting me this far. I even have to thank myself for sticking with it after times got tough."
Carver was the Heat 3 winner and pole sitter for the Grand National Expert main event but it was the defending Grand National Champion and Clio, Michigan's Jared Mees who got the hole shot right out of the gate. However, Carver would immediately go on to catch Mees halfway through the first lap and reclaim the lead. 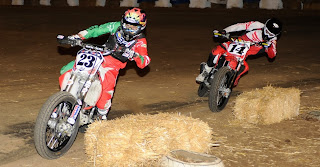 Jeffrey Carver, Jr. on the #23 Mack Daddy/Kiesow Racing Honda CRF450R leads Briar Bauman on the #14 Rod Lake Racing Honda during the 25-lap National main at the Castle Rock TT last evening.  Bauman hounded Carver throughout the first part of the race before sliding out with nine laps to go.  Carver officially led all 25-laps at the stripe to take his first Grand National win at the Washington State track.  AMA Pro Flat Track photo by Dave Hoenig.
Carver's main competition for most of the night came from Salinas, California's Briar Bauman (Rod Lake Racing/Honda CRF450R). Bauman was breathing down Carver's neck and looked as if he might pass him several times during the race but on lap 16 his tireless efforts came to an abrupt end after a crash left him unable to continue racing.
Mees, who was riding in third position for the majority of the race, benefited from Bauman's mishap and went on to finish second. Mees bounced back to finish strong after a wreck in the Dash for Cash put him in jeopardy of even competing in the main event.
Salinas, California's Stevie Bonsey (Zanotti Racing/Honda CRF450R) went on to close out the podium with a strong third place performance. Winn, Michigan's Henry Wiles (Don's Kawasaki/Honda CRF450R) came all the way back from starting in 13th position to finish fourth and Eatonville, Washington's Brad Baker (Specialty Fabrication Incorporation) finished fifth.
AMA Pro J&P Cycles Pro Singles
Brisbane, California's Dominic Colindres (Motorcycle-Superstore/Honda CRF450R) cruised to his first AMA Pro J&P Cycles Pro Singles main event victory of 2013 tonight at Castle Rock Race Park. Colindres was sharp all night as he won his heat race and followed suit in the night's main event, capturing the win by a full 2.65 seconds.
"The track was completely different than last year," said Colindres. "It really suited my riding style and the win came at a critical time for me. I'm really looking forward to the rest of the races now and this victory will certainly give me a huge boost of confidence. This win was for my mom and dad, the two people who have always been there for me and I can't thank them enough."
The lead was never in jeopardy for Colindres as he got off the pole early on and never let up on the throttle. Colindres seemed to gain ground almost every lap and with the win, he now sits fourth in the current AMA Pro J&P Cycles Pro Singles point standings.
As uncontested as the win was for Colindres, second place came even easier for Salinas, California's Bronson Bauman (Rod Lake, Honda CRF450R). Once Bauman was able to work his way up to the two slot after starting from fifth on the grid, he cruised to a comfortable second-place finish by over two full seconds over Stockton, California's Ryan Kearns (Stockton Moto/Honda CRF450R).