TOOELE, Utah (August 2, 2013) - After sitting out the last GEICO Motorcycle AMA Pro Road Racing round at Mazda Raceway Laguna Seca, the AMA Pro Vance & Hines Harley-Davidson Series will be in a prime attraction this weekend at Miller Motorsports Park in Tooele, Utah. The Miller Motorsports Park round represents the final race for Harley-Davidson Series title hopefuls to earn a position as one of the ten racers qualified for this season's four-race, $60,000 XR Showdown. Following Sunday's eight-lap contest, the points among the top ten will be reset at 1000. That means this weekend is all about earning a place in the show, which will kick off with a special doubleheader round alongside the MotoGP World Championship at the Red Bull Indianapolis GP later this month. 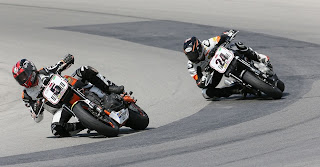 Steve Rapp on the #5 Milwaukee H-D XR1200 leads Travis Wyman on the #24 Harv's H-D XR1200 during the running of the AMA Pro Vance & Hines Harley-Davidson Series at Mid-Ohio on July 14.  After Sunday's round at Miller Motorsports Park, the points will be re-set for the XR Showdown for the first of two races at Indianapolis Motor Speedway over the Red Bull Indianapolis MotoGP weekend.  AMA Pro Road Racing photo by Brian J. Nelson.
Steve Rapp (No. 5 Aerostar Global/Suburban Harley-Davison) has established himself as the man to beat, scoring three consecutive victories despite the odd missed practice, qualifying session, and/or warm-up lap. His sensational form has elevated him to the top of the championship standings with 94 points and a guaranteed slot in the XR Showdown.
Rapp's key rivals -- defending champion Michael Barnes (No. 1 Spyke's Harley-Davidson), '12 MMP dominator Tyler O'Hara (No. 29 Eco Fuel Saver/Scrubblade), Mid-Ohio runner-up Travis Wyman (No. 24 Harv's Harley-Davidson), and teammate Ben Carlson (No. 45 Suburban Harley-Davison) -- are comfortably positioned as well and likely to run upfront once again this weekend around the fast and flowing Utah circuit. However, it gets a bit more interesting in terms of the XR Showdown qualifying picture outside the top five.  With 45, 40, and 40 points respectively, Barrett Long (No. 2 Longevity Racing), Shannnee Narbo (No. 46 Mob Racing), and Nicholas Hansen (No. 97 H&S Distributors) have earned themselves just a bit of breathing space in spots six through eight.
Beyond that, this weekend is shaping up to be an absolute dogfight. Heading into Miller Motorsports Park, 33 points is enough to hold down tenth, which means every rider who has scored at least one point this season has a mathematical opportunity to fight their way into the XR Showdown. More realistically, almost ten riders have a puncher's chance or better; positions nine through 18 are separated by just ten points, led by Ricky Parker (No. 96 ChiliPepper Racing) at 35. Josh Chisum (No. 10 Eco Fuel Saver/Scrubblade) currently holds down the coveted tenth spot at 33 points, with David Estok (No. 123 Thrashed Bike Racing) right there alongside him. Adam Raffe (No. 44 Racing for a Wish) and Rapp/Carlson teammate Brice Cooper (No. 105 Aerostar Global/Suburban Motors Harley-Davidson) boast 29 apiece, while Darren James (No. 229 Deeley Racing), Hayden Schultz (No. 59 Happy Trails M/C Connection), and Paul James (No. 70 Hoban Cycle) are very much in contention at 29, 28, and 27, respectively. Perhaps the man to watch out for is Eric Stump (No. 77 Fernet Insurance), who is ranked down in 17th but showed the skills to make up ground in a hurry with a sixth-place performance last time out at Mid-Ohio Sports Car Course.
The AMA Pro Vance & Hines Harley-Davidson Series rarely fails to surprise and can be counted on to provide an added dash of drama to a GEICO Motorcycle AMA Pro Road Racing round. Considering what's at stake at Miller Motorsports Park, this weekend could result in fireworks.
Stay connected with GEICO Motorcycle AMA Pro Road Racing on social media at http://twitter.com/AMAProSBK and http://www.facebook.com/AMAProRoadRacing.
Television Broadcasts on CBS Sports Network
Leading into coverage of GEICO Motorcycle AMA Pro Road Racing Round 6 at Miller Motorsports Park, CBS Sports Network will broadcast the AMA Pro National Guard SuperBike and AMA Pro GoPro Daytona SportBike races from the Red Bull U.S. Grand Prix at Mazda Raceway Laguna Seca as part of the CBS Sports Spectacular in a primetime special on CBS Sports Network beginning Friday, August 2 at 7:00 p.m. ET/4:00 p.m. PT.
Following the Mazda Raceway Laguna Seca broadcasts, a primetime airing of the weekend preview show for the Miller Motorsports Park event will begin on Friday, August 2 at 9:30 p.m. ET/6:30 p.m. PT.
This weekend's racing coverage will include three hours of LIVE broadcasts from Utah. AMA Pro National Guard SuperBike Race 1 will air LIVE on Saturday, August 3 at 5:00 p.m. ET/2:00 p.m. PT and will be followed by a same-day delayed broadcast of AMA Pro GoPro Daytona SportBike Race 1 slotted for 6:00 p.m. ET/3:00 p.m. PT.
Sunday's coverage will include a two-hour block of LIVE coverage, beginning with GoPro Daytona SportBike Race 2 on Sunday, August 4 at 3:00 p.m. ET/12:00 noon PT followed by National Guard SuperBike Race 2 at 4:00 p.m. ET/1:00 p.m. PT.
For an up-to-date list of the GEICO Motorcycle AMA Pro Road Racing broadcasts scheduled on CBS Sports Network, please visit http://www.amaproracing.com/rr/events/tvlistings.cfm?year=2013. To locate CBS Sports Network on your cable or satellite provider, please visit the Channel Finder at http://www.cbssportsnetwork.com/channel-finder.
International Pay-Per-View
Fully produced, high definition broadcasts of this weekend's races from Miller Motorsports Park will be available to audiences outside of the United States and Canada through AMA Pro Live, AMA Pro Racing's live streaming video website. At the low introductory cost of $0.99 USD per race, international fans can follow along with their favorite GEICO Motorcycle AMA Pro Road Racing stars this weekend by logging on at http://www.amaprolive.com/rr/.