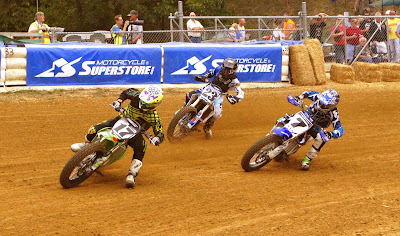 Carver, in his 3rd season of competing as an Expert-ranked rider in The Rolling Thunder Show, became the 159th rider to win at the premier level of two-wheeled flat track racing in the United States in the series that is undoubtedly the best racing on two wheels in the world.  After battling early in the National main with 2nd year Expert Briar Bauman, Carver held off the advances of defending AMA Grand National Champion Jared Mees and new Zanotti Racing signee Steve Bonsey to take his first career win.

In the shot above, Carver is sandwiched between two of the best on his #23 Kiesow Racing Yamaha YZ450F during heat race one action at the Peoria TT in August of 2012.  Leading as he has during a slew of events at Thunder Valley is Henry Wiles on the #17 Don's Kawasaki KX450F with Sammy Halbert on his #7 Fredericktown Yamaha working his way around JC23 on the inside line.

AMA Pro Flat Track reviews Carver's excellent journey in the Pacific Northwest below as the series gets ready to head back to the Midwest for round 7 of the 2013 AMA Pro Flat Track presented by J&P Cycles Grand National Championship at the Peoria TT this coming Sunday, August 11.