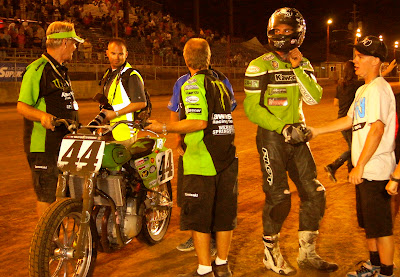 After a rough go around at the Hagerstown Speedway, round 4 of the 2013 AMA Pro Flat Track presented by J&P Cycles Grand National Championship season, Brandon Robinson and the #44 TJ Burnett Farms/USC Racing/James Hart Racing Kawasaki team made a great turn around at last Saturday's round 5 at the Sacramento Mile.

But it wasn't all easy just from the get-go as BRob44 had timed in during practice in the 5th-place spot, and then in the first qualifying session things were still looking good with a fast-time set out of the 32 riders entered for the day at the Cal Expo Fairgrounds-hosted event.  And then they lost a motor on their primary bike just as the second qualifying session was starting off.

Check out the rest of the press release below to find out how the Illinois-based team and the Pennsylvania rider made for a great recovery and kept their heads down to eventually bring home another podium and grabbing back some points lost after the crash at Hagerstown in early July.

While Brandon works on getting his helmet off and beaming a wide-as-his-home state smile underneath from his superb run to 3rd-place at the Indiana State Fairgrounds, team owners Bill Werner and Jay Springsteen talk with Brent Pierce of BTP Photography in what was a very popular finish for the young man from Oxford, PA., who just shy of three years earlier had been pitched out of the park in turn one and whose future in racing at that time looked bent and mangled.  What a magnificent turn around since that time!

Read on as Brandon and the TJ Burnett Farms Kawasaki team get ready to roll out their Singles Series machines on Saturday night, August 3 for round 6 of the 2013 season at the Castle Rock TT in the Pacific Northwest!

Warren, OR. – August 1, 2013 –Round 5 of the 2013 AMA Pro Flat Track presented by J&P Cycles Grand National Championship season is in the record books, and the TJ Burnett Farms Kawasaki team with rider Brandon Robinson pulled-out all the stops to bring home a 3rd-place finish at the Cal Expo Fairgrounds-hosted event in the first mile event of the season on July 27.


After a rough result in round 4 at the Hagerstown Speedway on July 6, which saw Brandon crash out of the main and as a result losing the points lead with a 17th-place finish, the team did a magnificent job of regrouping and coming back to grab the last spot on the podium at Sacramento. 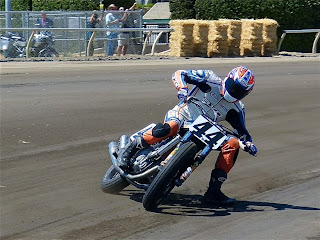 Brandon Robinson is shown in action at the Sacramento Mile on the #44 TJ Burnett Farms/USC/James Hart Racing Kawasaki EX650 on July 27 during round 5 of the 2013 AMA Pro Flat Track presented by J&P Cycles Grand National Championship season. Photo by Tom Stein/Northwest Track Shots.
“We started off strong in practice early in the day (5th-place out of the 32 bikes entered),” stated Brandon, “and we fast-qualified in the first qualifying session, but then the bike broke starting off in the second qualifying session, and fortunately we still ended up in with a 4th-place overall effort.”


During the qualifying break, the team went to work before the first heat race to make sure everything else was in line, and then Brandon went to work in his heat race, the first of the evening, lining up alongside fast-qualifier Mikey Martin on the Bonneville Triumph. Brandon and the #44 TJ Burnett Farms Kawasaki won the first heat after not having any laps on the back-up bike, and made the Dash for Cash, where a 2nd-place finish behind Howerton Motorsports Bryan Smith's Kawasaki got them four valuable points towards climbing back to the top of the leader board.


With a front-row start to get the 25-lap National main going, it was time again for the Pennsylvania resident to go back to work. “Everyone took off quick, and after a pretty good start I was able to hang with Bryan for the first couple of laps, but then everyone got bunched up and I started spinning up the tire, so I decided to settle down and let the tire come back to me,” continued Robinson. “We were able to hang with the lead four of Bryan, Brad Baker, Sammy Halbert and Jared Mees, so I just hung in there until towards the end when things started to heat up, and then it was time to go with just a few laps remaining, and we were able to hang in there and get a good draft at the end to get us a 3rd-place finish.” 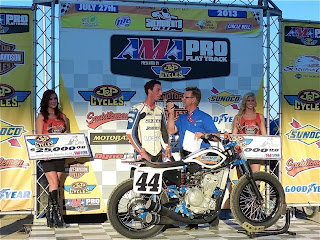 Brandon Robinson is interviewed on the podium by AMA Pro Flat Track announcer Barry Boone after taking the #44 TJ Burnett Farms Kawasaki to his heat race win at the Sacramento Mile on July 27. Brandon brought his Kawasaki home in the 3rd-place position to round out the podium in the National main in the first mile event of the season. Photo by Tom Stein/Northwest Track Shots.
Bryan Smith won the Sacramento Mile for the third-straight time, with 2012 AMA Grand National Champion Jared Mees bringing it home in the runner-up slot after returning from injuries. Coupled with new points leader Brad Baker's 4th-place finish at Sacramento and not making the Dash, Brandon gained back five valuable points and now trails Baker by 15 points in the overall standings, 92-77, heading into round 6 of the 2013 AMA Pro Flat Track presented by J&P Cycles Grand National Championship season at the Castle Rock TT this coming Saturday, August 3.
“We made it into Warren, OR., early Monday morning and are staying with the Fisher family (Davis Fisher is also sponsored by team owner TJ Burnett) so we'll be able to kick back and be ready for the National on Saturday night,” stated Brandon, “TJ did all the driving again to get here—he still doesn't trust me behind the wheel of the rig—ha!
“With our results from Sacramento, all kidding aside, I'm really stoked for the five other mile events for the season (Indy, Colonial Downs, Springfield I & II, Santa Rosa) that are coming up to run. We've got a good package under us and a strong team behind me so I'm looking forward to the rest of the season, for sure,” Brandon stated before heading off to dinner late Monday evening.
The TJ Burnett Farms/USC/James Hart Racing Kawasaki team is looking forward to the rest of the season as well as seeing all of the fans come by to say hi to them at each event so they can share with them the great time they are having this season. We hope to see you all soon!
Brandon Robinson #44 & the TJ Burnett Farms Kawasaki AMA Grand National Championship team would like to thank all of our sponsors for the 2013 season:
TJ Burnett Farms, USC Racing Kawasaki, James Hart, Arai, Next Moto Champion, ATI Physical Therapy, Penske Racing Shocks, AXO, Saddlemen, Protect All, Pro Plates, ISC Racers Tape, Motion Pro, Southland, Matrix Race Products, Race Tech, Lemonds Kawasaki, WKR, Mr. Sign, Bill Built, Royal Publishing, VC Graphix, DAOapparel.com, PMP Sprockets, Spectro Oils, CP Pistons, G2 Ergonomics, Works Connection, K&N, Hartman Photography, Mitchell Mechanical, J&H Repair, Big Dawg Racing, Ricko, Jim Chapman, Tom Scibek, Joe Reynolds, John Y, Mom & Dad
2013 AMA Pro Flat Track presented by J&P Cycles Grand National Championship season schedule: http://www.amaproracing.com/ft/events/