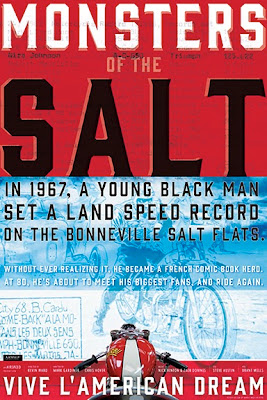 Mark Gardiner, author of the excellent 'Riding Man' book which tells the story of a transplanted Canadian who sold it all to head to the Isle of Man to compete in the world famous TT events, is working on drumming up interest in another compelling story that should bring goose bumps to any follower of motorcycle racing in any way, shape or form.  For those that haven't read this great story of a man's journey across the pond, I highly recommend it.

'Monsters of the Salt' tells the story of a journey to the Bonneville Salt Flats, the infamous dry lake bed in Utah that is the cathedral to land speed records that Indy is to open-wheel racing and the Springfield Mile is to AMA Grand National Championship series American flat track racing.

Mark has penned a recent story about this journey on his 'Backmarker' column at Motorcycle-USA.com, which can be read here (and as he has stated, grab yourself a cup of Joe and settle in for a great read!)  He is also trying to drum up interest in bringing this great story to the big screen, which for us motorcycle racing-types would be a wonderful viewing experience.

More of Mark's excellent work can also be found on his website, Bikewriter.com here.

Read more about Mark's venture below.


Press release courtesy of the Backmarker himself, Mark Gardiner

Monsters of the Salt

In 1967, a pioneering African-American drag racer named Nira Johnson set a land-speed record on his Triumph Bonneville. Without realizing it, Nira inspired a life-long love of American hot rod culture in two French guys: Denis Sire, an artist who used Nira as the basis for a comic book hero; and Laurent Romuald, the top motorcycle restorer in Paris, who built a replica of the comic book hero’s motorcycle.


Now, motorcycle journalist Mark Gardiner has teamed up with Airspeed Productions and director Kevin Ward to turn this heartwarming pro-American and pro-motorcycle story into a feature length documentary film, titled Monsters of the Salt.


“I’ve been writing about motorcycles for over 20 years,” says Gardiner. “In that time, I’ve told a few stories that made people say, ‘That should be a movie’. This is the first time I’ve done anything about it.”


In the film, the American drag racer, Nira Johnson will meet his two biggest fans for the first time, as they bring their replica of his motorcycle to the Bonneville Salt Flat, to run alongside Nira’s original race bike.


“Any one side of this story—Nira’s real-life ‘American Dream’, or the French guys’ American hot rod fantasies—is worthy of a film,” says Gardiner. “But the amazing way that the two stories are connected is like a shot of nitrous oxide to the ‘Monsters’ plot. In the one old magazine photo that the artist, Denis Sire, had to go on, you couldn’t see Nira’s face, so Denis assumed he was caucasian. You should have seen Nira’s face when I told him that he was a famous comic-book character in France, but as a white guy! This is why I don’t write fiction; you could never make this shit up!”


Gardiner is working with a veteran producer, Tom Guttry, and his company Airspeed Productions. They’ve also recruited renowned commercial director Kevin Ward (he was the director of photography on Dust to Glory.) You can support their project by making a donation on the Indiegogo crowd-funding website here: http://tinyurl.com/donatemonsters


“This is a really inspiring story, and one reason that I want to bring it to the screen is that Americans are constantly exposed to news stories in which crowds of foreigners are shouting ‘Death to America!’ It may be true that the American government manages to make a lot of people (including a lot of Americans!) very angry, but around the world, the idea of America is still incredibly popular. That’s one of the major themes of ‘Monsters of the Salt’.”—Mark Gardiner
You can view the 'Monsters of the Salt' video trailer here.

For more information, you can contact Mark Gardiner directly via: