In less than 48 hours the stars of The Rolling Thunder Show will hit the mile oval at the Indiana State Fairgrounds for round 8 of the 2013 AMA Pro Flat Track presented by J&P Cycles Grand National Championship season for the annual running of the Indy Mile.

With a big European crowd on hand in Indy for the 6th Annual Red Bull Indianapolis MotoGP weekend, this year's event will surely be one for the record books.  If you haven't gotten your tickets yet, you'd better get on it here so that you are guaranteed a prime seat in the house during the last weekend of the Indiana State Fair on Indy's near east side.

In last year's heat race #2 (pictured above), Jake Johnson on the #1 Zanotti Racing XR750 took the win to qualify for the National main.  This year, Johnson will be making his debut on the Lloyd Brothers Motorsports Ducati at Indy, alongside team mate Henry Wiles on the #17 LBM/Ramspur Winery Ducati as the duo will be looking to help get the LBM machines to the front in the big show this Saturday.

Sammy Halbert will be looking to defend his Indy Mile win from last year on his #7 South East H-D XR750, and Kenny Coolbeth, Jr. on the #2 factory Harley-Davidson Motor Company XR will be looking for his first win of the season as well.  Rob Pearson (shown above on the #27 Roeder/Eaken Racing XR), will be riding in this year's event on the Weirbach Racing team, and whether they roll out their new Kawasaki, or depend on one of their strong stable machines in either of their Suzuki or XR will be decided come track time on Saturday.  Mikey Avila on the #33E SDI XR has semi-retired, so unfortunately we won't get to see his talent again at Indy this weekend.

With local based Crosley Radio/Howerton Motorsports Kawasaki's Bryan Smith looking to make up for last year's battery failure, Flyin' Bryan and the Howerton boys will be out for blood.  And local hero Dan Ingram will be ready to make things happen on the Brush/Eaken Racing Kawasaki this weekend and everyone will have their eyes on Clermont's favorite racer.

With a host of others also looking to make it happen, the Indy Mile is the place to be this Saturday and you are guaranteed to see a great show from the best racing on two wheels in the world as it unfolds before your very eyes.  With qualifying set to roll off at 3:00 PM EDT, get ready to see the best of the best as they do battle under the lights of the ferris wheel at Indy.

Check out AMA Pro Flat Track's press release below, and we'll be bringing you some of the highlights next week after the action has happened and the roar has settled. 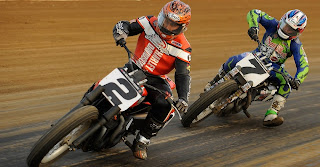 Kenny Coolbeth, Jr. on the #2 Screamin' Eagle factory H-D XR750 leads eventual event winner Sammy Halbert on his #7 South East H-D XR750 during heat race #2 action at the Indy Mile in August 2012.  Both will be returning to the Indiana State Fairgrounds this Saturday for the running of the 2013 Indy Mile event.  AMA Pro Flat Track photo by Dave Hoenig.
After recently wrapping up the Grand National Expert Singles championship at the Peoria TT last weekend, Eatonville, Washington's Brad Baker has his sights set on a clean sweep of the Grand National Expert Twins title, as well as the coveted overall Grand National Championship as he currently holds a lead in both respective categories. Baker has been on the attack right from the get-go this season and the 20-year-old seemingly has no ceiling in regards to his pure talent and ability. The former Saddlemen Rookie of the Year Award winner will be looking to add to his already impressive stat sheet this weekend when he rolls out his Dodge Bros Racing Harley-Davidson.
Graham, Washington product and last year's Indy Mile winner Sammy Halbert (Southeast Harley-Davidson/Harley-Davidson) hasn't had the kind of season he's envisioned so far in 2013. Halbert came off a knee injury just in time to win Round 3 at the Stockton Half-Mile and it looked like he had hit his stride perfectly. Unfortunately for Halbert, he has yet to find the podium since that win and he's coming off of a very troubling weekend at Peoria where he crashed in the evening's first qualifier and was unable to continue racing. Halbert currently sits eighth in the overall Grand National Championship point standings and will look to get back on track this weekend.
Any mention of a mile-long dirt track race involving motorcycles wouldn't be relevant if Flint, Michigan's Bryan Smith's (Crosley Radio/Kawasaki) named wasn't involved in discussions regarding possible candidates to claim victory. Smith has been the most consistent rider on mile-long circuits in recent AMA Pro Flat Track presented by J&P Cycles history and is currently one-for-one this year as he earned a main event win at the Sacramento Mile. Smith looked to be on his way to another dominating victory at the Indy Mile last year but a bike malfunction late in the race prevented him from doing so. Look for Smith to be searching for redemption this weekend as he tries to better his current third position in the overall Grand National Championship point standings.
AMA Pro J&P Cycles Pro Singles
Mead, Washington's Wyatt Maguire (Kirkland Racing/Yamaha) and Albion, New York's Ryan Wells (Waters Auto Body/Honda) are currently dead even in the points. Both riders are locked in at 93 points and the two have seen better days than their last visit to the Indiana State Fairgrounds, both finishing outside the top five here a year ago.
Undoubtedly the hottest AMA Pro J&P Cycles Pro Singles rider coming into Round 8 is San Martin, California native and last weekend's Peoria TT winner Rodney Spencer Jr. (Mack Daddy Racing/Honda). Spencer's huge win lifted him to third in the point standings and is primed to make a title run.
Davison, Michigan rider and defending AMA Pro J&P Cycles Pro Singles champion Stephen Vanderkuur (Parkinson Brothers Racing/Honda) comes into the weekend as last year's Indy Mile victor and will need another similar performance this time around if he plans on keeping his 2013 title hopes alive. Vanderkuur currently sits fifth in the points and is running out of events to make up the ground needed if he plans on repeating with another championship.
Willow Street, Pennsylvania's Shayna Texter (Crosley Radio/Honda) enters the weekend seventh in the points but, like her teammate Bryan Smith, has been known to excel on mile-long tracks as she also won the Sacramento Mile in AMA Pro J&P Cycles Pro Singles competition this year. Look for Texter to put in a solid performance this weekend.
How to Catch the Action


AMA Pro Racing will be live streaming multiple channels of behind-the-scenes video of the weekend's activities alongside Live Timing & Scoring on the AMA Pro Live streaming video website (http://www.amaprolive.com/ft/). AMA Pro Live puts fans in the director's chair, allowing them to choose from a variety of viewpoints.
About AMA Pro Flat Track presented by J&P Cycles