TOOELE, Utah (August 4, 2013) - Saturday's AMA Pro National Guard SuperBike thriller at Miller Motorsports Park was backed up by an even more shocking contest on Sunday -- one that further raises the stakes heading into the final three SuperBike races of the GEICO Motorcycle AMA Pro Road Racing season. After failing to match the pace of the lead trio on Saturday, Yoshimura Suzuki Factory Racing's Martin Cardenas thrust himself right back into the championship fight with a well-timed victory that came at the end of a full-tilt battle with National Guard Jordan Suzuki's Roger Hayden. 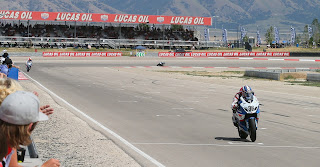